The chefs at Guyutes have taken smoked hens to a new level by adding cannabis-infused oil to the recipe. 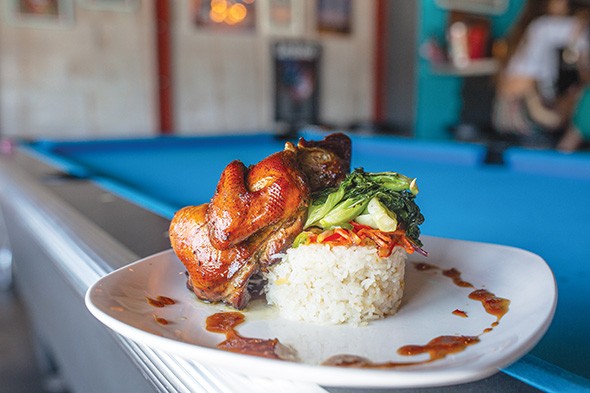 Summertime is the domain of the barbecue, and this month’s infused recipe falls within that realm.

Oklahoma Gazette has teamed up with the chefs at Guyutes, 730 NW 23rd St., to bring readers cannabis cooking recipes that stray from the beaten path. This month, Jarrod Friedel and Matt Pryor have tried their hands at Thai-style smoked game hen.

Friedel said to use kitchen shears to cut down and remove the backbone from the hen.

“That just helps it cook better and gives it a bigger area to smoke,” he said.

Mix together all the herbs, spices and sugar in a processor to make a paste, rub it on the hen and let it marinate.

“Try to work it in as much as possible and, if you can, get it in the cavities. Do that but try not to break the skin because we’re gonna have to inject it with the butter,” Friedel said.

After marinating and injecting the oil, smoke the bird and peaches.

“It kind of varies on how many birds you do, how thick they are, but you need to at least put it in there for a good two hours and 15 minutes,” Friedel said. “I raised the heat just at the end to try to crisp up the skin a little bit because at 260 [degrees Fahrenheit], it really doesn’t crisp as much. As long as your smoke’s going, you’ll hit the internal temperature of 165 pretty easy in about two hours.”

Afterward, add more oil and mix the smoked peach sauce and apply it to the hen.

“We added a half cup of hoisin and then a quarter cup of brown sugar to it to add a little bit of sweetness, take out the heat because it was just super hot. It burned me,” Pryor said. “I just wanted to bring a different sweetness to the body of it, something that is more fusion-style than just going completely traditional. And seeing how we were already smoking, it was just like an idea that I’ve had to do like smoke fruits into sauces. Seeing how we’re already getting the smoke here, it’s not going to be as heavy as what you’re going to get on the hen, but I think it would accent it and then still get the sweetness. I wanted to go fruit wood just because stuff like hickory is just a little overbearing, so it was either going to be apple, peach, cherry wood, also kind of different, something that would just give it a mellow woodiness to it and not overpowering.”

Friedel chose the Juicy Fruit strain to use for the infused oil for the recipe.

“As soon as I decided I was going to do Thai-style, I really wanted Thai landrace strain and the closest I could find was a hybrid of it,” he said.

The decision to raise the temperature for the final 30 minutes of smoking pays off with a nice and crispy crust. The marinade is so flavorful that it would be a tasty bird without the addition of the smoked peach kung “pow” sauce, but the sauce puts it over the top. The decision to smoke the peach is inspired, and it comes through in the final product and prevents it from being too sweet. This was my first smoked game hen, and the smokiness helps mask its distinct gamey flavor. Even though the bird was small, I ate about half of it and saved the rest for a second dosage that crisped in the oven for 10 minutes. There was no residual cannabis flavor from the oil, but it provided a mellow body high that does not make you sink into the couch.

Remove the oil from the heat. Allow it to cool.

Strain the oil over a cheesecloth into an airtight container for at least 45 minutes. Do not squeeze the cannabis flower.

Store any excess oil in a dark container in a cool, dry place. Refrigerate it to extend the shelf life to several months.

Take poultry shears or a decent pair of scissors and cut the hen from the neck down along both sides of its backbone. Flatten the hens by pushing down on them with your palm on the breasts. Discard the backbone or use it for stock.

Wash the hen and pat it dry. Set it aside.

Add the cilantro, garlic, chilies, brown sugar, salt, pepper and coriander to a food processor. After processing, add the fish sauce and mix to a paste. Add the cannabis oil and mix thoroughly.

Rub the paste all over the hens and try to work as much of it as you can into any cavity possible. Avoid breaking the skin if possible.

Let the hens marinate for 8-12 hours. 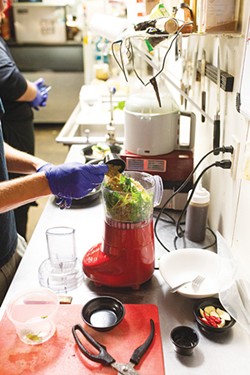 Cut the peaches in half and smoke them for two hours.

In a small pot, add the water, rice wine vinegar and sugar. Cook the liquid until the sugar is dissolved. Next, add the ginger, garlic and Thai chilies. Reduce the liquid by 25 percent. Add the peaches, hoisin and brown sugar. Bring the liquid to a simmer and whisk in the cornstarch slurry.

Take the sauce off the heat and blend it for one to two minutes and then serve.