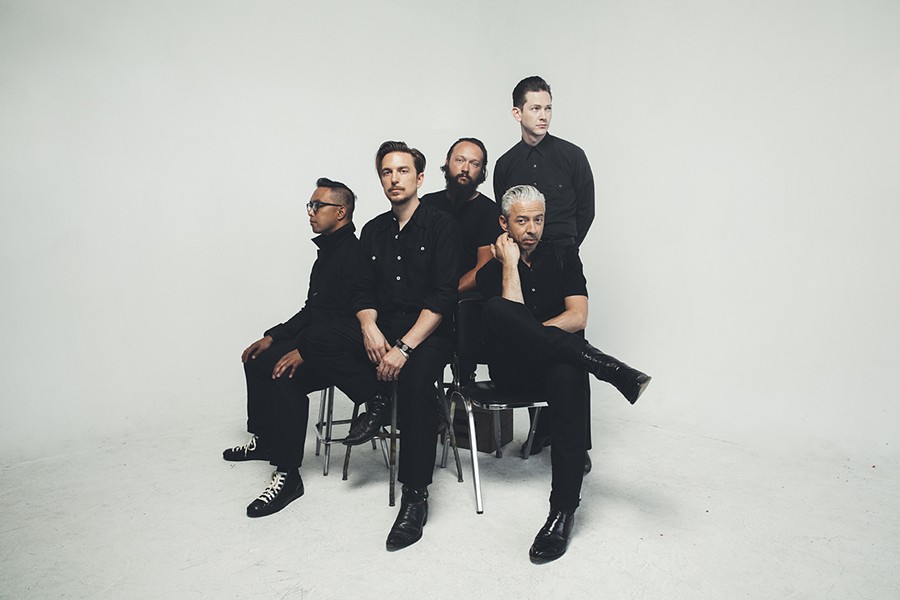 JD McPherson knows you might not like Christmas music, or at least that you pretend not to.

“People say that a lot, but there’s a reason why they still play Bing Crosby’s stuff on the radio,” McPherson said. “People like to play that character of, ‘Oh, I hate Christmas. I hate Christmas music,’ but come on. … [“Christmas (Baby Please Come Home)” by] Darlene Love? I could hear that stuff year ’round. That’s great stuff.”

McPherson, a former Tulsa teacher turned Nashville-based musician, is scheduled to perform with his band Dec. 14 at Tower Theatre, 425 NW 23rd St., in support of his Christmas album, Socks, released last month. When McPherson told other musicians about Socks, his fourth full-length release, he heard a few bah-humbugs.

“For the listening public, it’s not that big of a deal,” McPherson said. “It doesn’t seem out of the ordinary that someone is making holiday-themed material during that time of year, but in bands, I guess it’s almost like a dirty little secret that it’s something that some bands do just to have something to do in between albums or it’s like their label sort of pressured them, saying, ‘Hey, let’s get some McDonald’s commercials.’ For one reason or another, it’s not the highest order of album-making in some people’s eyes.”

According to the press material for Socks, McPherson started thinking about recording a Christmas album after British pub-rock legend and Elvis Costello associate Nick Lowe, working on 2013’s Quality Street: A Seasonal Selection for All the Family, asked for holiday song recommendations. McPherson said Socks is influenced by the work of songwriting team Jerry Leiber and Mike Stoller, who wrote the Elvis Presley holiday hit “Santa Claus Is Back in Town,” along with “Hound Dog,” “Jailhouse Rock” and hits recorded by The Coasters (“Yakety Yak,” “Charlie Brown”) and The Drifters (“There Goes My Baby,” “Fools Fall In Love”). McPherson said recording a Christmas album inspired him to return to the ’50s style that characterized his debut album, Signs & Signifiers.

“The language or the vocabulary of early rock ’n’ roll lends itself to that type of material,” McPherson said. “It just works better. We could’ve done a psych-rock Christmas album, but I don’t really think I would’ve wanted to listen to it afterwards.”

Instead of trying to recreate the sounds of his favorite Christmas songs, McPherson said he spent more time trying not to duplicate the tropes that make some holiday songs sound corny and trite.

“I think I thought more of what not to do than what would make a good thing,” McPherson said. “I think we gain something by excluding because there are a lot of clichés within holiday music, as you can imagine. I think most people are like, ‘Let’s do a Christmas track together, and let’s go to the website where all the Christmas vocabulary is and try to make it all rhyme.’ … And also, ‘Well, we’ve got the song done. Let’s do an overdub of jingle bells.’ The ‘bling bling bling bling bling bling’ that’s on everything. Those are the two things I wanted to avoid.”

Socks has a throwback sound, but the lyrics present unconventional takes on the holidays in songs such as “Hey Skinny Santa” (encouraging Old Saint Nick to tour the U.S. fattening up on regional cuisines including crawfish étouffée in New Orleans and Polish sausage in Chicago to expand his 32-inch waistline before the big day), “Holly, Carol, Candy and Joy” (about “a lucky boy” spending the holidays with four seasonally named women) and “Claus vs. Claus” (a duet with UK singer/songwriter Lucie Silvas describing an argument over household chores between Santa and his wife).

“I have a thin veneer of cynicism, but I’m ultimately a romantic at heart,” McPherson said. “I really do love it every year, and I really enjoy it more now than I ever have. It’s the same with the record. Ultimately, it’s a feel-good record, but there is a bit of sarcasm and snarkiness in it.”

“Bad Kid” is told from the point of view of a juvenile delinquent with a “stocking full of kerosene, matches and wood” and a “permanent spot on the naughty list” who intimidates a department store Santa into running and hiding. “Santa’s Got a Mean Machine” lauds Santa’s slick new transportation in ’50s hotrod slang, while “Ugly Sweater Blues” laments the questionable fashion choices forced upon a child by his mother (“Mama, why can’t you see I feel like a fool? / Green elves with snowflakes and scratchy alpaca wool”). McPherson said getting into the Christmas spirit encouraged him to revert to a more childish mindset.

“I guess I didn’t think about it much, but there’s a very youth-centric point of view on the record,” McPherson said. “I think it’s because we all have these sort of deeply ingrained memories as kids. What’s a more simultaneously exuberant and disappointing time of the year than Christmas? Everybody’s had that traumatic emotional experience of shaking the box and it doesn’t rattle. It kind of shimmies, and you know that’s clothes and you really, really, really wanted Action Man or a Game Boy Pro, and that’s not what you’re going to get.”

Though Socks’ title track describes a crestfallen kid finding footwear wrapped up under the tree (“This is the worst gift I ever got. … Why’d you waste the paper on a lousy pair of socks?”) McPherson said he enjoys receiving them as a present as an adult.

“I love getting socks for Christmas actually,” McPherson said. “I always ask for socks. That’s the time of year when I can get somebody to spend $20 on a pair of socks. I love socks.”

Though children are more readily enchanted by the season’s traditions, McPherson said he also enjoys the grownup’s perspective of Christmas.

“When you’re a kid, you don’t really think about how weird everything is,” McPherson said. “You don’t think about how strange [it is] that suddenly there’s a tree in your living room, and you also don’t think twice that there’s an oversized elfin figure that is in your house in the middle of the night. You sort of expect all this weird magic that is happening, and then as an adult, you figure out that it’s actually adults cultivating all of that atmosphere, and it’s cool to be a part of it.”