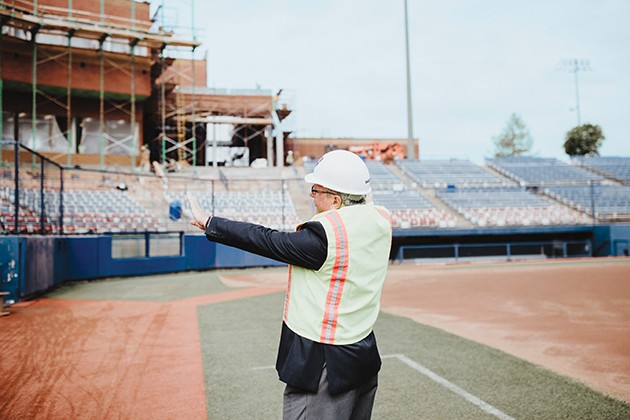 Construction crews are rapidly working to finish renovations to the USA Softball Hall of Fame Complex and OGE Energy Field, 2801 NE 50th St., in time for the first pitch of the Women’s College World Series (CWS) on May 30.

The latest round of renovations, which is focused on the construction of a brand-new press box and a complete overhaul of the facility’s player and media interior amenities, is the third phase of four that strengthen Oklahoma City as the softball capital of the country.

Timberlake Construction is applying brick façade to the new two-story press box that includes an entire level devoted to ESPN’s coverage of the event and space for analysts to do live pitching and hitting demonstrations.

The $19 million project for phases three and four and the $27.5 million total comes out of the general obligation bond approved by the city in 2017 as well as private donations.

After the completion of the CWS in early June, work will begin on the final phase of the project that will add a second level for stadium seating that includes 4,000 additional seats and increases stadium capacity to 9,000, and additional temporary outfield bleachers will add 3,000 seats.

Tom Anderson, the city’s special projects manager, said the series currently brings 70,000 visitors to the city from as far away as Florida, and they contribute $15 million to the city’s visitor-based economy by staying at hotels and eating at restaurants. He estimated that number will increase to $20-$23 million annually with additional seating capacity.

“It benefits private business and spurs a lot of spin-off athletics like youth softball tournaments that want to be close to the first because this is the Super Bowl of women’s softball,” Anderson said.

“It’s a choice OKC made to help advance everyone’s quality of life, our stature as a destination in the country.”
—Tom Anderson click to tweet

The impetus for stadium renovations came up with talks to secure a long-term agreement with the NCAA and its broadcast partner ESPN to keep the CWS in Oklahoma City, Anderson said.

The NCAA and ESPN wanted to see improvements to player facilities like locker rooms and increased setup for media, as CWS media credentials and television ratings continue to increase.

“It’s a choice OKC made to help advance everyone’s quality of life, our stature as a destination in the country,” Anderson said.

Oklahoma City has a long-term agreement with the NCAA that runs through 2035 but is effectively longer because the city has the right of first refusal when it comes to negotiating an extension.

General seating tickets to the CWS sell out every year by March. According to John Miller, USA Softball’s director of membership, approximately 5,000 standing-room-only tickets will be available before the event.

“A lot of the same families return year after year, regardless of who is playing,” Miller said.

To better accommodate fans in the outfield that are not able to see the outfield scoreboard, a new 10-by-17-foot videoboard will keep them in the loop with scores and replay.

The biggest impact for fans at 2019’s CWS is the loss of shade provided by an awning from the old press box. Miller said a new awning will be constructed in the final phase but they can seek refuge from the heat in the new concourse sections of the stadium.

Other improvements being finalized during phase three include media hospitality work rooms and a press conference room, which Miller said will allow for better access than doing post-game interviews in a long tunnel, as was the previous setup.

The USA Softball facility hosts more than 30 events annually, including last week’s Big XII Conference Championship. USA Softball moved to Oklahoma City from Chicago in 1966. Groundbreaking for the museum at its current location began in 1970, and the current stadium opened in 1987 and hosted its first Women’s CWS in 1990.

“This construction project is a complete team effort and includes all of the citizens of Oklahoma City,” said USA Softball board president-elect Rodney Cobb. “They’ve taken on this daunting task. … I’d be remiss if I didn’t say thank you to the citizens who voted [yes] on the initiative to allow this to happen. We’re extremely privileged and proud to have our home in Oklahoma City.”