Menu staples of burgers and grilled cheese anchor Hopscotch in its first-year transition. 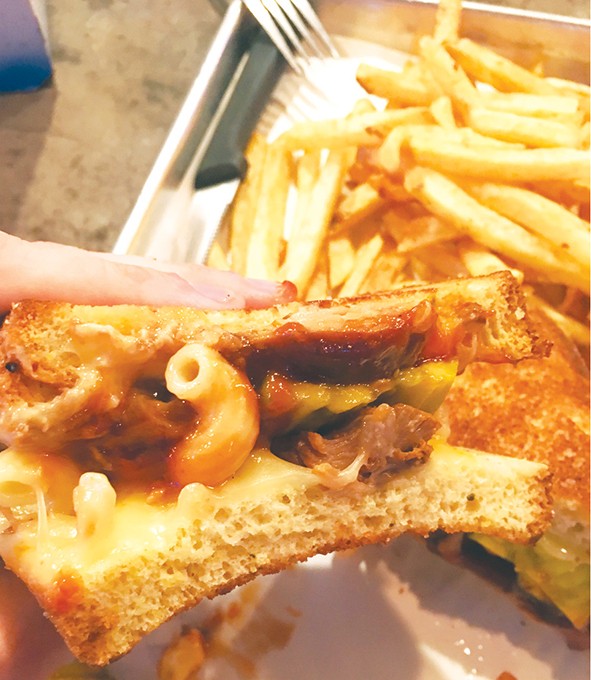 Hopscotch is a game that crosses generations. Whether you’re a 5-year-old or 90-year-old, you’ve had experience with the game that is a lot older than you might realize. Variations of the game existed in ancient Greek, Roman and Chinese cultures.

to promote with the opening of restaurant and bar Hopscotch in the former Dugout location at 10909 N. May Ave. in November 2017.

“Hopscotch is youthfulness, and when I think of playing it as a kid, I was invincible and everything in life was open. It gives me a feeling of hope, and that life is still out there,” Jungmann said, who owns Hopscotch with Dale Cazes and also owns Paseo Grill and Sauced on Paseo.

Sauced on Paseo continues serving great pizza
Sauced on Paseo serves up some of the most delicious, inventive pizzas and sides in OKC.
By Greg Elwell
Food Reviews

Jungmann was a partner at Dugout and guarantor of its original lease but had a falling-out. After he went on to become a successful operator in the Paseo, the property’s owner reached out to Jungmann when the Dugout lease expired. He jumped at the opportunity to bring a more youthful vibe to the location while still retaining its status as a watering hole.

The transformation wasn’t finished even after Hopscotch opened its doors following a two-year complete remodel of the old, smoky bar. Hopscotch opened with an emphasis on counter-service hamburgers and grilled cheese, but the building has since been reconfigured into a seat-yourself full-service restaurant and bar.

“Countertop service didn’t quite work for us as well as we wanted,” Jungmann said. “We have a focus on late-night bar business to work with people who want to come out and play and a lot of service industry side.”

The bar is now open until 2 a.m., and food service continues until midnight. The back of the restaurant that was previously occupied by countertop ordering has now been replaced by a series of arcade games like Skee-Ball, Golden Tee, darts and a combination arcade cabinet featuring the likes of Pac-Man, Galaga and others. A shuffleboard will make an appearance within the coming weeks, and a patio enclosure was recently finished to allow patrons to enjoy food and drinks while being shielded from busy May Avenue traffic.

Jungmann said a few more décor enhancements are in the works, but it’s not the only thing that will get a facelift. The menu staples of burgers and grilled cheese will get additions that will include things like braised lamb shank, Asian-inspired lettuce wraps and a Guatemalan rice dish. Hamburger patties will be hormone-free, and the new menu items will include more organic and locally grown items.

“Some of the food we have coming out is also geared towards keeping you in shape,” Jungmann said, seeming to acknowledge that the menu in its current construction doesn’t leave much room for those looking to cut carbs. “Hamburgers and grilled cheese — everything has bread on it. If you get that much bread over and over again … some people can eat it seven days a week, but it doesn’t work as well anymore.  You need different type of stuff.”

Until the new menu is finished in the coming two months, the breads, which arrive from suppliers Ben E. Keith Foods and Martin Bros. Distributing, are the stars of the menu. There is the brioche bun for eight hamburgers that include requisite Caesar and Theta versions, but the most inventive is The Doctor with grilled apples, cream cheese and Worcestershire drizzle.

Upon my first visit to Hopscotch, I knew burgers were the main attraction. Jungmann said they make up about 70 percent of sales compared to about 30 percent for grilled cheeses that include a Reuben, a turkey-and-ham melt and an American and Muenster cheese sandwich with honey mustard and spicy mayo.

Perhaps I’ve become jaded, but I was surprised the bread packed a nice kick, especially when combined with the spicy barbecue sauce.  While the macaroni and cheese didn’t have much heat, I liked the use of cavatappi pasta, and it provided enough cheesiness that I didn’t notice the melted slice of cheese on the sandwich. 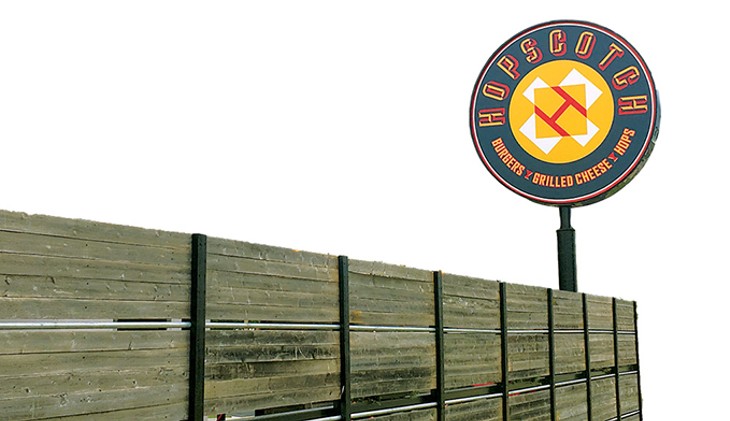 The closest analog in the city to Hopscotch’s Mac Street Boys is the Macaroni Pony at The Mule. As much as I like The Mule, I actually liked Hopscotch’s version more. The pork was well done — firm but juicy.

The Mac Street Boys is at least a four-napkin sandwich with two kinds of sauces spilling onto your hands and face. The accompanying fries were enjoyable. They are fresh-cut and exist perfectly in the middle ground between too crispy and too soft.

Hopscotch has been through a bit of transition in its first year in operation, but the core of its menu is a solid foundation. With a solid operator like Jungmann, that shouldn’t be a surprise. I was expecting a wider list of beers and liquor to be available, but I don’t drink much, so I’m not the target demographic there. I like that there is a place with plenty of televisions to watch a game and have solid food.

Jungmann is honest with plans that he wants the Hopscotch brand to move to more locations. I’m interested to see how it continues to evolve, and I will be back to check out the new menu when it is released later this year.

What works: The jalapeño bread packs a kick.

What needs work:Communication between servers.

Tip: Be on the lookout for non-sandwich additions to the menu in coming months.