Back on solid ground, Falcone’s pizza by-the-slice is worth a visit. 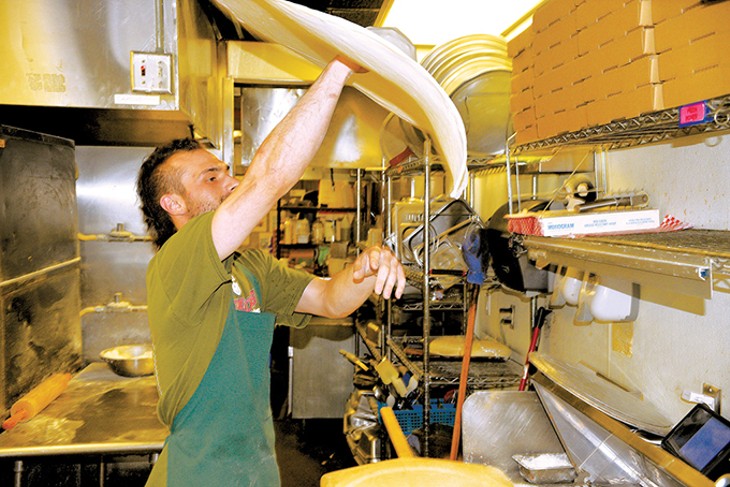 Falcone’s Pizzeria is a case study in the pitfalls of rapid expansion. Six months after founder Danny Falcone opened the original location at 6705 N. May Ave. in 2006, there was a prominent Bricktown location, and by 2009, there were four Falcone’s locations in the metro.

A decade later, only the original location remains operational. J.P. Wilson purchased the remaining location from Falcone’s business partner in 2014 and found that it had strayed from its initial success of serving pizza-by-the slice using ingredients from scratch.

“After they closed the others and kept the original, it was sad to see them change things to try to bring the food costs down to save money,” Wilson said. “When the opportunity presented itself to move in, buy the restaurant and restore things back, a lot of people in the neighborhood were behind us.”

“We restored everything to how it was made originally, and it started to increase business and how it used to be when Falcone’s first opened,” said Wilson, who is an in-demand magician performing at NBA halftime shows across the country, including Thunder games.

Wilson also operates JAM Events and Productions, a catering and event-planning company. He said he was attracted to Falcone’s because of fond memories eating at the original location and its kitchen, which could be used to prepare for JAM events.

Wilson also added a drive-thru window for customers to call ahead and pick up orders without leaving their cars, but it also functions for those in a hurry at lunchtime.

“We have a quite a few people that pull up and just say that they need a slice of pepperoni, and boom, we get it out to them,” Wilson said.

Falcone’s is one of the few pizzerias to offer pizza by-the-slice in Oklahoma City. If you want pizza but not a whole pie, you’re left with the options of Empire Slice House or Easy E Slice Shop  in 16th Street Plaza District, chain buffets like Tulsa-founded Mazzio’s or CiCi’s or driving down to either Sandro’s Pizza and Pasta location in Norman. 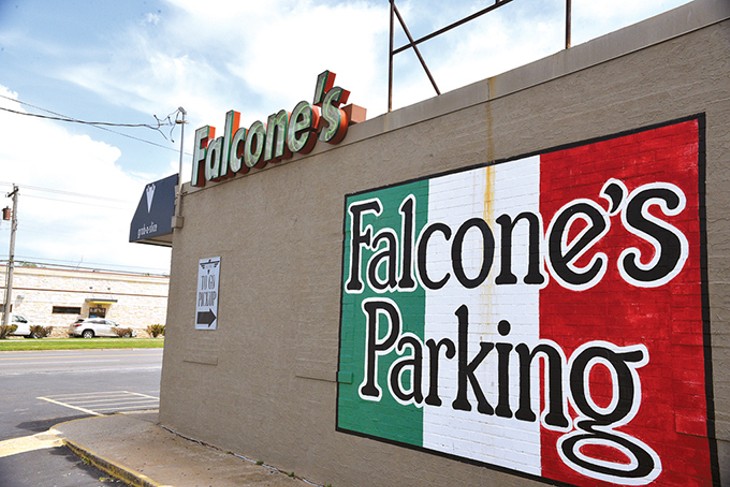 Falcone’s quick operation always caught my attention when driving down May Avenue, but it piqued interest even further when I noticed that Falcone’s website address is bestpizzaokc.com. That’s quite the boast in a city with a lot of good pizza: Empire, The Wedge Pizzeria, Pizzeria Gusto, The Hall’s Pizza Kitchen and, of course, Hideaway Pizza.

I knew I was in for a good experience after I navigated the small parking lot around Falcone’s and made it inside to see chef Matt Spivey tossing fresh dough into the air.

Guests can get a cheese slice for $3.49 or two-topping slice for $4.49. There are also pasta dishes like spaghetti and meatballs and three-meat lasagna that Wilson said are top sellers outside of the pizza. You can also get a calzone, stromboli, toasted sandwiches, hamburgers and salads or order a 14-inch or huge 18-inch pizza ($18.99 for one topping) made to order.

Falcone’s serves large New York-style slices and, according to Wilson “if you can take a slice out of it, fold it half, and there is a droop at the end, it is New York-style.”

It’s like The Office’s Michael Scott’s favorite pizza, Sbarro, that can be found in mall food courts and airport terminals across the country, but exponentially better.

A fresh pepperoni slice bubbles with plenty of mozzarella, but the fresh dough is the star to me. Compared to Empire Slice House, which has more inventive toppings and flavors, Falcone’s crust is much sturdier but still plenty soft when you bite into it. Two slices is enough of a lunch meal to make you want to take a nap under your desk like George Costanza if you have to go back to the office.

In a subsequent trip to Falcone’s, I ventured away from pizza and ordered the chicken Parmesan sandwich with a side salad ($9.49). The best part of the sandwich was the roll, which arrives fresh from the La Baguette bakery in Norman multiple times a week. The overflowing mozzarella made for some fun bites to see how far it can stretch, but I found the underlying chicken disappointing. The chicken breast didn’t take on the sauce very well, and it was dry. The bread and cheese is good, and I would recommend going with the meatball to satisfy the sandwich craving.

Also not to be missed is a slice of strawberry or chocolate cake ($4.99), which comes from Joni’s Signature Cakes in Edmond. The strawberry cake is full of real strawberries and topped with shaved chocolate.

Mother’s Day weekend signified a new addition to Falcone’s menu: brunch, which will be offered Saturday and Sundays going forward. Wilson is excited to expand the offerings that will include eggs Florentine, a house-made English muffin topped with spinach, shallots, mushrooms, bacon or sausage served with red pepper hollandaise, home fries and fresh fruit. Grilled tenderloin filet is used for steak and eggs, and Falcone’s griddle is a piece of grilled sourdough topped with potatoes, bacon, sausage, eggs and tomatoes. The brunch service will also include waffle and omelet bars.

I’m not sure Falcone’s is a runaway best pizza in Oklahoma City like its website boasts, but it certainly deserves to be in the conversation. If it has been awhile since your last visit, it’s worth giving it a try with fresh taste buds.

What works: The chocolate waffle and French Bomber are irresistible.

What needs work: The chicken in the chicken Parmesan sandwich is dry and didn’t soak up the sauce.

Tip: Call ahead to pick up from the drive-thru window.