Leave your worries behind and enter the calm at OKC’s floatation therapy center.

A Marine Corps veteran who served in Beirut, the Edmond resident has long grappled with post-traumatic stress disorder (PTSD). The condition means his fight-or-flight response is always in the “on” position.

“You know, people say, ‘Just relax.’ And I didn’t know what relaxed even felt like,” he said. “Sensory deprivation changed that.”

Smock said the experience inside the tank is designed to remove all stimuli.

“There’s no light, no sound,” he said. “The salt makes the water so dense that it removes the sensation of gravity. The water is heated to 93 degrees.”

Ideally, he said, you stop feeling the water. And there is something in the nothingness.

Listen to the world around you, even when it’s quiet, the air conditioner rattling the ducts, little snippets of conversation and the hum of the computer screen and the tapping of feet on the carpet.

The world is forever intruding on us.

But when the lid shuts, the lights go off and the earplugs block out the sounds of the water, it’s up to your brain to fill the void — or, for Savage, to become the void.

“For me, it’s like a mental reboot,” he said. “Most people with PTSD are ‘on’ all the time. That part of our body is stuck. So when I go in there, it completely resets it.”

Savage uses meditation to dive past feeling his body or hearing his mind in order to let go and truly relax. That is his baseline. 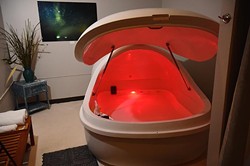 “Now that I know what my body feels like relaxed, I have something to shoot for,” he said. “It has been extremely impactful. I can see the day-to-day difference. I’m not as stressed. And when I am stressed, I’m consciously aware of how that’s different from being relaxed.”

Ligon said he and Smock were skeptics, but after hearing comedian Joe Rogan’s podcast about the benefits of sensory deprivation, they drove down to Dallas on Jan. 4, 2014. The next Tuesday, they were filing out paperwork to become an LLC.

“I have two cracked vertebrae in my back from my time in the military,” Ligon said. “After I finished my first float, I felt like a million bucks. Even a couple of days later, I just felt physically better.”

Experiences in the tanks vary by customer and by visit. Some people have dreamlike experiences or hallucinations. Others use the time for quiet reflection and the space to think. And some leave the lids open, turn on music and just soak up the Epsom salt water, which is said to have its own therapeutic benefits.

Smock said the magnesium in the salt is good for sore muscles and is especially beneficial after a strenuous workout.

After a few appointments, Savage is now experimenting with how to get the most out of the experience. He floated right before a session with his therapist, thinking he might be more open.

“When you come out of floating, you’re not quite grounded,” he said. “So it was an interesting session, but I don’t remember much of it.”

He said he’ll keep going back every other week. For a man haunted by anxiety, the quiet, womblike seclusion of the tank is the best place to find his calm again.