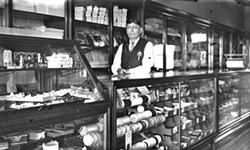 Long before photo albums and curated Instagram feeds came onto the scene, Oklahomans utilized photography as a means to document their lives and, inadvertently, leave a treasure trove of information for future historians (and museumgoers).

We the People: A Portrait of Early Oklahoma features approximately 60 photos of early Oklahomans from the Robert E. Cunningham Collection at Dickinson Research Center.

Borne out of an abundance of archival material, We the People represents a cross-section of early Americana captured by photographer Henry Wantland. Composed of both staged portraits and scenes of Stillwater, the exhibit offers a window into life before and after Oklahoma’s statehood.

Along with his family, Wantland moved to Oklahoma Territory in 1891, two years after the land run. Consequently, Wantland’s photographs reflect the wide range of people living in the region.

“When he set up his photography studio, for the next two decades, he recorded the people in the town around him, and so you get this glimpse at the diverse and vibrant community he was a part of,” said Kimberly Roblin, director of Dickinson Research Center and curator of archives. “We’re fortunate that these exist. A lot of photographs were lost. The detail that’s captured in these is quite remarkable.” 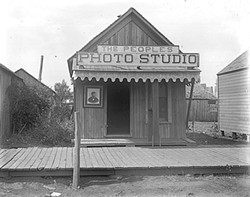 According to Roblin, Stillwater would have been considered a metropolis at the time, and the exhibit features enlarged photos of the town to give visitors a sense of the town’s different elements. Some of the photos also depict the campus of Oklahoma A&M (now Oklahoma State University), Roblin said.

While We the People contextualizes its photos in a geographic way, the focus remains on the titular people: Stillwater’s inhabitants and those who traveled to the town.

Largely centered on the everyday lives of its subjects, the photos document entire families and their most important moments. For Roblin, who went through an extensive selection process for the exhibition, the photos enliven the past in new ways.

“Sometimes, we think of history as just a series of dates and events,” she said. “That’s just a list; that’s not history to me. At its core, history is about people.”

Roblin pored over census records and newspapers from the time period. During the early 20th century, Oklahoma Territory included immigrants from multiple countries and from many other states, and Wantland’s subjects came from a variety of backgrounds, ethnicities, occupations and ages.

“I was struck by the diversity,” Roblin said.

Wantland’s medium provided a fairly accessible way for the residents of Stillwater to preserve their memories.

Some of Wantland’s more prominent subjects, such as bankers, doctors and groundbreaking social worker Fern Lowry, were identified. Others, unnamed by their photographer, remain shrouded in anonymity.

Roblin said the photos represent a microcosm of society, and she included the nameless portraits as part of the exhibit’s holistic approach to history.

“Even though we don’t know the names of these individuals and families, they still tell us something,” she said. “For some of them, I’m sure it was a significant event to come into town and have their portrait taken.”

Roblin said one of her favorite photographs depicts a family standing in front of their house.

“It’s a modest house. … You can tell life is not easy for them; their clothes are worn, their shoes are in need of repair,” Roblin said.

A closer look at the photo reveals an American flag in the background.

“There’s something so moving and significant in that detail,” Roblin said.

Perhaps an interesting precursor to the debates that rage today about the ethics of altering images, Wantland’s work offers a reminder that photographs, often assumed to be realist by nature, are not always what they seem.

Just as modern photographers wield the ability to airbrush and alter depictions of reality, so too did Wantland utilize all the tools of his trade to present the best vision of his subjects, and his images reveal technical prowess and playful editing.

According to Roblin, Wantland manipulated the chemical processes in photo development in order to soften the complexions and features of some of his subjects.

He also conducted what Roblin described as a “Frankenstein Photoshop experiment,” in which he spliced an image of an absent brother into a group photo.

“It just goes to show that technology and tools might change, but photographers have always liked to tweak and improve the image,” Roblin said.

Wantland’s photographs also reveal unintentional traces left by history — scratches, imperfections and thumbprints — that Roblin said she wants to leave as they are.

Despite some touch-ups and splicing, Wantland’s photographs reveal a collective portrait of early life in the newly created state of Oklahoma, which Roblin said was noted for its high rates of literacy and homeownership.

The divergent figures of We the People signify something as American as the Constitution’s Preamble or Walt Whitman’s poetic catalogue of people: a group united by a common thread.

“At the end of the day, these individuals shared something profound,” Roblin said. “Not everyone is going to take a risk and choose the unknown, but they did. Stillwater was a new start for them and an opportunity to forge a better life. Together, they created this community.”

print headline: Pioneering photos, Some of Stillwater’s earliest settlers make their photographic debut in We the People, an upcoming exhibit at the National Cowboy & Western Heritage Museum.

We the People: A Portrait of Early Oklahoma