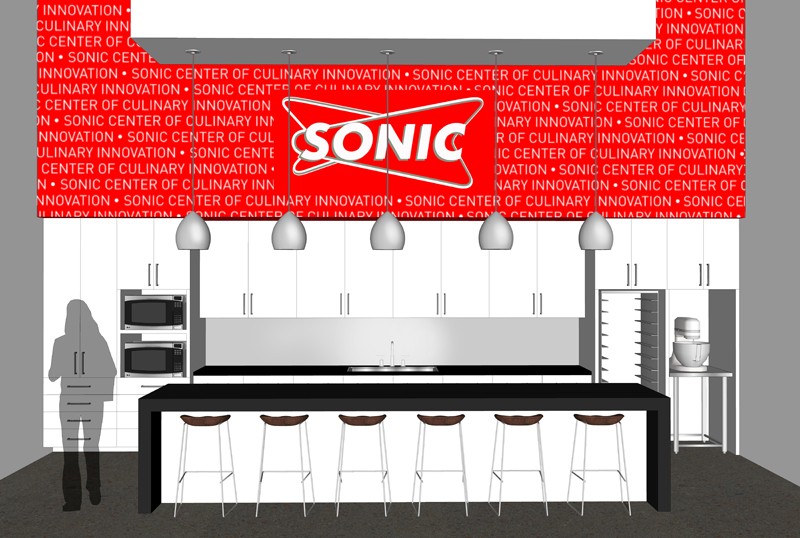 Sonic Corp. breaks ground on a test kitchen at its Bricktown headquarters.

Sonic Corp. is one of those companies that many Oklahoma City natives forget is local — until, that is, one ventures down to the Bricktown Canal and sees the company’s huge corporate headquarters at 300 Johnny Bench Drive. On May 6, the company broke ground for a test kitchen at its headquarters. Previously, new items went from the design stage to a reality in the office and at the retail store next door, 208 Johnny Bench Drive. The company has simply outgrown this way of doing things and wanted a centralized location where creativity can happen. In other words, Sonic now has its own site for culinary creation. “Not only is it a place where our innovators can create, but it’s also a place where they can make sure that what they are making comes out in the drive-in,” said Jason Acock, assistant manager of corporate communications at Sonic. The majority of the space will be for creation, both in food and design. Those on the food team will occupy the kitchen for developing new tastes, and those on the practical side will help with determining the best way to deliver the end results to customers. The Culinary Innovation Center also will feature video cameras to broadcast cooking demonstrations and meetings to any of its stores around the country. A bar in the kitchen will include seating for six with a separate room that can hold 40 people for presentations and discussions. “It’s just not an ideal situation for what we want to do with our innovation team. Having this kitchen is going to be a real treat for them. They won’t even have to walk across the parking lot to test some stuff,” Acock said. Sonic is constantly working to develop and improve its products. The team at Sonic is already creating products for next year’s menu. Sometimes they make small changes to existing favorites, and sometimes they roll out a whole new product line. The company did that last year with hot dogs when it introduced the pretzel dog. On April 1, Sonic made an announcement about its newest flavor of ice cream shake: kale cream pie. It made us wonder if those innovators were using their powers for good. But on the heels of that gag release (and April Fool’s Day) came the announcement of legitimate new flavors, including chocolate-covered jalapeño and salted caramel. Sonic is once again working with Van Hoose Construction on the 3,429-square-foot test kitchen. Van Hoose built the company’s corporate headquarters in Bricktown a decade ago. Completion is set within the next three to four months.