You are what you geek at Oklahoma City’s SoonerCon, and for three days in June, about 2,000 of them celebrate 25 years of SoonerCon fandom.

“SoonerCon started out as literary convention with a hardcore nerd factor going on, and over the years, we have evolved more into a pop culture expo,” said Aislinn Burrows, SoonerCon 25 vice-chairwoman. “It’s definitely more of an old-school convention vibe. It’s a full three-day weekend experience, so it’s complete immersion into whatever your fandom is.”

Last year, the entirely volunteer-run con donated $3,000 to the National Alliance on Mental Illness (NAMI). Now, SoonerCon is seeking nonprofit status so it can expand its charitable giving footprint.

“There is such a need for those services — particularly in our community — and we’ve been proud to partner with NAMI for the last couple of years,” Burrows said. “The whole point of SoonerCon is to be community-focused because community is about developing relationships; friendship is magic, and we all want to be a wizard.” 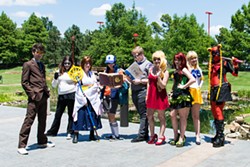 A Saturday costume contest is divided into seven categories, including historical and fantasy. There are first-place awards in each category, and a Bernina OKC sewing machine goes to a best-in-show winner.

“We have people costume and cosplay all weekend long,” Burrows said. “Costuming is one of the creative arts, and people get super excited about it. We want people to feel comfortable, and the costuming community is so body-positive and a very accepting, warm culture.”

With 3,000 square feet of indoor gaming space, guests can participate in Nerf wars, Muggle Quidditch and stick horse jousting as well as tabletop role-playing and board games.

This year, members of the Oklahoma Space Alliance will present a year-in-review talk about space, and an Oklahoma geologist and meteorologist will tag-team a panel called Quakenado: The Earth Science of Oklahoma.

In the exhibitor hall, more than 60 vendors will sell everything from swords to comic books.

“One of the things that’s really important to us is to support the regional creative community,” Burrows said. “In fact, we have over 140 panelists.”

Voice actor, composer and producer Vic Mignogna — known for roles in more than 300 animated series and video games and for creating Star Trek Continues — will hold a Q&A and autograph session.

“One of the things I cherish most about doing convention appearances is it gives you the opportunity to connect with fans and hear what they felt about work that I’ve done,” he said.

Mignogna grew up in western Pennsylvania and then lived in Texas for 20 years before moving to Los Angeles.

“One of the many wonderful things about voice acting is that you are afforded the opportunity to play characters that you would never be cast as on-screen,” Mignogna said.

He has released six episodes of Star Trek Continues with a seventh to follow this fall. The award-winning Web series has earned almost 5 million views.

“The episodes look and feel and sound exactly like the original series,” he said. “I was a very, very big fan of the original series back in the ’60s, and it was canceled in its third season. My desire was to rebuild the entire soundstage and then continue to make episodes as if the series had not been canceled, and we’ve gotten an amazing response.”

SoonerCon offers one of the largest art shows in the region with 3,000 pieces. Its charity live auction, one of NAMI’s primary donation sources, is June 25.

Lon Chaney Jr., who played the titular character in 1941’s The Wolf Man, will be inducted into the Oklahoma Speculative Fiction Hall of Fame, which SoonerCon established to recognize speculative fiction creators who are native to Oklahoma or have strong ties to the state.

Since SoonerCon runs on volunteer power, there are many volunteer jobs — including logistics support, hospitality and setup — available for ages 16 and older.

SoonerCon offers free membership to active duty military members June 24, and children ages 12 and younger are admitted free with the purchase of an adult membership.