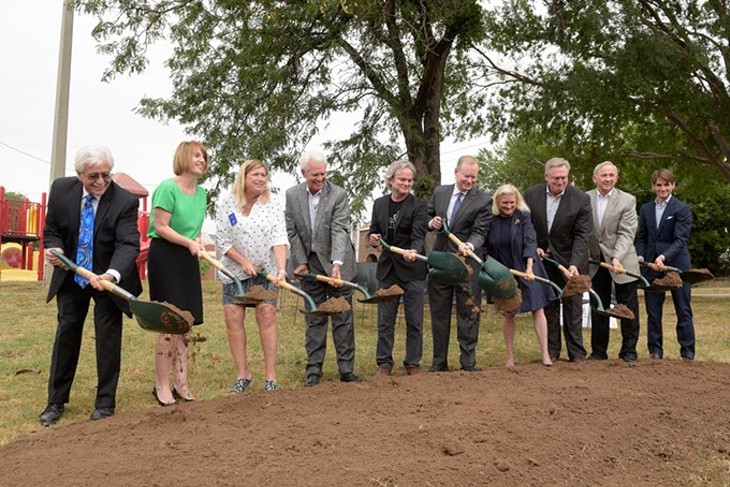 Nearly a decade ago, Brian Fitzsimmons learned city funds slated for renovations of Red Andrews Park involved paving its 68-car parking lot, among other improvements including upgrades to the park’s municipal gym.

The urban park was the only public space in the growing Midtown commercial district nestled in an evolving neighborhood, then called the Cottage District, and neighbor Fitzsimmons believed the park was ready for a redevelopment plan that reflected the neighborhood’s future. The plan, laid out in the voter-approved 2007 City of Oklahoma City General Obligation Bond program, failed to recognize the reshaping of an urban area.

Fitzsimmons, along with fellow neighbor and architect Randy Floyd, began crafting their own park improvement sketch. The end result was a full city block of green space around a gym with 75 on-street parking spots. As Fitzsimmons put it, “The big idea was to make the parking lot a park.”

The two architects, along with their sketch, launched a movement to modernize the park. With more people moving back into the neighborhood, which began to be called SoSA for South of St. Anthony, and attention from Midtown Renaissance and other property stakeholders, the sketch and its concept began to garner support.

“It evolved much differently from the first sketch,” Fitzsimmons told Oklahoma Gazette earlier this month. “The sketch was just to show it could be done. When people got serious, I came up with a whole new design.”

“When the neighbors came forward, they were willing to help,” said Kupper. “As you look around, the neighborhood has changed, and the park should change along with it.”

A unique private-public partnership effectively launched the movement to fruition. On Aug. 1, city leaders, SoSA neighbors, Midtown stakeholders and other community dignitaries broke ground to signify the next phase of a storied park. Through bond funds, tax increment financing (TIF) and private donations, Red Andrews Park and its Johnnie L. Williams Municipal Gymnasium are undergoing a $1 million renovation. The project designed by Fitzsimmons Architects includes plans for a sun lawn, a walking path, a volleyball court, new lighting and landscaping and a covered pavilion with the existing play area and gym as the park’s centerpiece.

“When a really good idea surfaces, people in this city come together and figure out how to make it happen,” Ward 6 Councilwoman Meg Salyer said at the groundbreaking.

The SoSA neighborhood, with its boundaries extending from NW Sixth to NW 10th streets and from Classen Boulevard to Walker Avenue, dates back to the early 20th century with single-family dwellings and multifamily units. A half-century ago, the city constructed a municipal gym on the cleared land south of St. Anthony Hospital, at the corner of NW Eighth Street and Shartel Avenue. The gym quickly became home to numerous recreational tournaments and events, largely basketball-related. In the 1970s, the area was designated as a park and named in honor of former state representative Ernest “Red” Andrews, who is best known in Oklahoma City for his free Christmas dinners. In 2003, the city rededicated the gym in honor of legendary local basketball coach Johnnie L. Williams.

In the park’s storied history, the future wasn’t always so bright. As the neighborhood declined with seedy motels and boarded-up storefronts blocks away, the park became a hotbed of crime and illegal activity. Recent and ongoing investments into Midtown and the surrounding neighborhood put the park’s former years in the past. With the planned renovations, neighbors and community leaders focus on its future.

“As the area continues to develop, it will become what a park is intended to become,” Fitzsimmons said. “The gymnasium will continue with programs and tournaments. With the amphitheater, hopefully, there will be programs and events to come.”