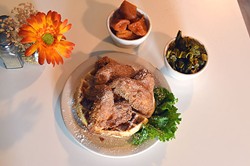 Well-known American chef Thomas Keller has an oft-repeated quote: “A recipe has no soul. You, as the cook, must bring the soul to the recipe.”

This quote could easily be the motto for the soulful food at Mama E’s Wings & Waffles, 3838 Springlake Drive.

Keith Patterson, co-owner and cook with wife Stephanie Patterson, is known to say, “If you cook with love, people taste it.”

It’s true from the time you come in to the restaurant and see a picture of the original Mama E on the door.

Soul is unmistakable in the home-style chicken and dumplings ($10.95). The dumplings are lovingly handmade and are combined with chicken in broth. This is Mom food, and with two sides, it’s a hefty meal.

Along with the chicken and dumplings, I had collard greens with bits of pork seasoned well with black pepper. The baked sweet potatoes were cooked perfectly, not mushy and just sweet enough. The cornbread muffin begged for butter and held up wonderfully without falling apart.

As a mac and cheese aficionado, I was happy to see that the noodles for the side dish were shells and not elbow macaroni. Here’s my time-tested mac and cheese theory: Shells hold more sauce than elbow pasta. While the mac and cheese tasted fine, it was a bit soupier than I like. More cheese for a thicker sauce would have been welcome.

The signature dish, wings and waffles ($11.95), is amazing. The large, plate-size waffle comes with three seasoned fried chicken wings and a dusting of powdered sugar with maple syrup on the side.

I always thought chicken and waffles was a southern dish, but Stephanie debunked that myth.

“The dish actually began in New York City, in Harlem,” she said.

Legend has it that during the Depression, jazz musicians wanted something to eat in the morning hours after playing late-night gigs. Since it was too early for breakfast and too late for dinner, wings and waffles made a perfect combination.

Keith learned to cook from his late mother, Evelyn (Mama E), and the nine-year-old restaurant features all of her recipes, including grilled pork chops ($10.95) cooked to order. The ideal side for these juicy pork chops is spaghetti with home-cooked tomato sauce.

Also cooked to order is the catfish dinner ($12.95). The serving is huge and includes breaded and seasoned catfish and tartar sauce. Louisiana Hot Sauce goes very well with this.

Until this trip, I had never eaten neckbones ($11.95), but I ordered them anyway. The pork neckbones are braised in a seasoned broth, with the meat barely clinging to the bone. Served with rice and collards, it was a true traditional soul food feast.

“It’s traditional among [Southern] families to have Kool-Aid with their dinner — it’s what I had growing up,” Keith said.

The flavors vary daily and often include sour apple, raspberry and grape. Grape is my absolute favorite; just smelling the grape fragrance reminds me of my childhood summers.

“Being on Restaurant: Impossible has really increased our business,” Stephanie said.

With a following of faithful customers, Mama E’s does just fine. As I was leaving, an incoming customer asked me, “Did you leave anything in there for me?” with a smile.

I answered, “I did, but just barely.”

What works: The Kool-Aid served in multiple flavors guarantees a truly Southern-style meal. What needs work: The mac and cheese needs heavier cheese. Tip: Grab the traditional hot sauce to have on hand; it’s authentic to add it.