Oklasoul Cafe provides a rotating menu of options with plenty of sweet treats. 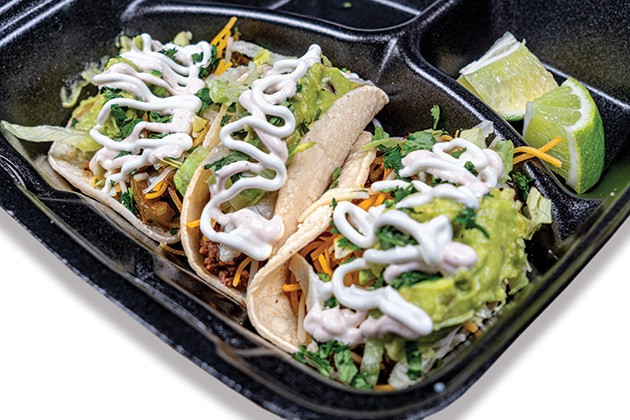 The soul at the heart of Oklasoul Cafe doesn’t mean soul food. It’s the passion its owner puts into creativity for its ever-changing menu.

After seven years in the Navy working as a welder and doing metal fabrication, Zarious Hughes was looking for direction. A Chicago native, Hughes met his wife Raysheeda while stationed in San Diego. The couple moved to Oklahoma City to escape the high rent of Southern California and be closer to her family, but Hughes didn’t know how to fill the post-military career void.

“I struggled for a long time when I got out of the Navy,” he said. “I was 26, and I was like, ‘I don’t know; I feel like I should be doing something.’ The time I was supposed to be figuring it out, I was in the Navy.”

He rediscovered his love for cooking when he got married four years ago, and his wife encouraged him to attend culinary school. He graduated from Francis Tuttle Technology Center a year later and began working in kitchens and as a personal caterer. A chance meeting while catering a wedding laid the groundwork for Oklasoul Cafe, which opened at 1524 SE 15th St. on Jan. 11.

“I was catering a friend’s wedding and talking to her dad about a different opportunity, and God was just like, ‘Here it is; this is what is happening,’” Hughes said. “When your passion and what God wants you to do lines up, you can’t do anything about it.” 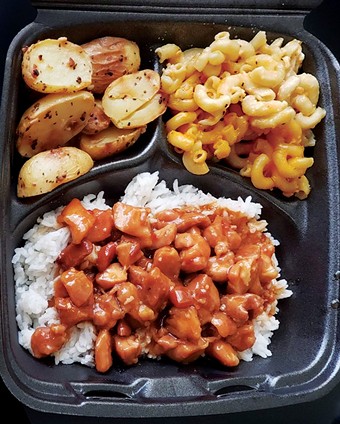 Oklasoul Cafe doesn’t have a set menu. Hughes prefers to rotate offerings by the day and the week. Tuesdays are designated for tacos, and three tacos and a drink sell for $6.50. Customers can choose chicken, beef or a veggie medley of roasted peppers and onions topped with guacamole, chipotle mayo, sour cream, lettuce and cheese.

Hughes plans to mix favorites like fajita, bourbon and barbecue preparations of chicken along with lemon pepper salmon and new, weekly inspirations like mushroom lasagna on the rotating menu.

“I didn’t want to do a steady menu with a wait staff and that’s it,” he said. “I know myself; I would get stagnant and bored. I need change. I need to be able to do different things.”

Other entrees like beef enchiladas, fajita beef and others will make appearances at Oklasoul Cafe. Sides like roasted potatoes, macaroni and cheese, cilantro-lime rice, green beans, candied bacon deviled eggs, cornbread and rolls join them on the menu.

“It’s based on what holds well because it’s cooked every day and then held throughout the day because some things will dry out too quickly,” Hughes said.

While Hughes enjoys making savory entrees, it’s his love of baking that first got him interested in cooking. While in the Navy, he’d often put together something quick to satisfy a sweet tooth. He’s flexing his dessert muscles with offerings like peach cobbler, oatmeal cookies and more.

“The peach cobbler is the biggest hit,” he said. “I use a pie crust on top when a lot of other people use biscuits. When I make it at home, I use double pie crust because my wife says, ‘I don’t need the filling; I just need the crust.’”

He’s planning to add a Neapolitan shortbread cookie to the menu in the coming weeks with vanilla, chocolate and strawberries layered on top of each other.

“It tastes just like the ice cream,” he said.

Hughes is an open book to suggestions for menu additions based on customer feedback. He replied to one five-star Yelp review saying to look out for oxtails as an entrée option. He said he’s open to adding flavor from his hometown Chicago to the menu, like its famous mild sauce, a mixture of hot sauce, ketchup and barbecue sauces, among other ingredients. Another Chicago favorite is the Gym Shoe Sandwich that combines gyro meat, Italian beef and sometimes pastrami on a sub sandwich roll.

“There was a place around the corner from me called Happy Fish & Chicken that had a Gym Shoe Sandwich, and it combines everything into one,” he said. “The one thing I’ll never add is fried food because it’s hard to keep it crispy and there is enough fried foods around. A lot of people want me to. It’s not soul food; it’s cooking with soul.”

In addition to graduating from Francis Tuttle, Hughes is also finishing a business degree from Mid-American Christian University — a program he started before the opportunity for Oklasoul arrived.

“It’s perfect timing,” he said. “It was the right time so that I could understand the money cost of things and business side and not just the food side.”

After four years in Oklahoma City, he’s adjusting to life in a smaller city after living in Chicago and San Diego and being stationed for a year in Japan with the Navy.

“I hated it at first, absolutely hated [Oklahoma],” he said. “I’m not going to lie; I encountered my first up-front racism, and I hated it here. I’ve seen that not everyone is like that. Everyone thinks Chicago is Chiraq, and it’s not like that. Everyone thinks San Diego is hippies and everyone loves the beach, and that’s not it. I was appreciative of how easy it is to start over here.”

He is hopeful that Oklasoul provides the opportunity for more restaurant and catering concepts in the future.

“Let’s keep it going and add the soul all around OKC,” Hughes said. “I still can’t believe it, and it’s really happening. I’m grateful for everything. The business is picking up. Everything takes time, and people have to see that you’ve been open a while and not just fly-by-night.”