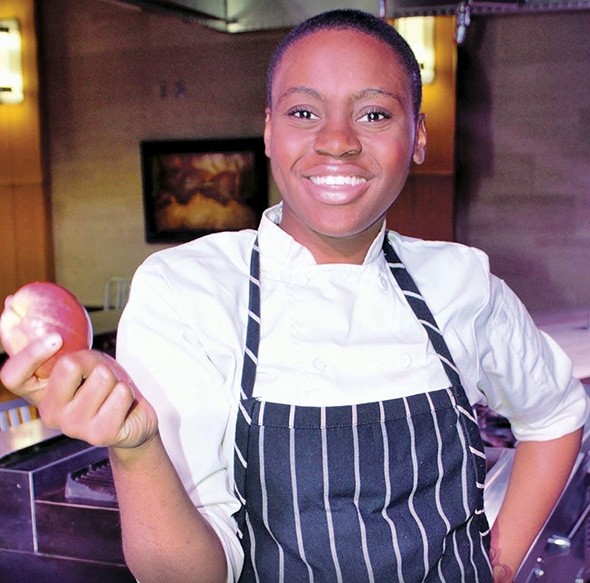 “I wanted to see if it was possible to have a [plant-based] lifestyle and not have it taste like tree bark,” Asali said. “I went through this journey and had a whole new way of looking at food and fell in love with food in a completely different way.”

In advance of the holiday season, Health Koncious wants to make sure meals in the months of November and December will be both delicious and nutritious. For November, the delivery service is offering a family feast that includes a lentil loaf, Cajun seitan bites, green bean casserole, candied yams, mashed potatoes, cornbread stuffing, collard greens with black-eyed peas, baked macaroni and cheese, coconut cabbage and a choice of either fresh yeast rolls or cornbread.

“I don’t know how most people’s holidays are, but we have a feast at our house. We easily spend 400-plus dollars on our food,” Asali said.

A full family feast plan is enough food to serve at least 20 people, and its $339.99 cost can be made over payments, Asali said, but Health Koncious offers multiple meal sizes all the way down to a single meal with either a lentil loaf or seitan bites, two sides and bread for $21.25 (delivery in OKC included).

“I wanted to see if it was possible to have a [plant-based] lifestyle and not have it taste like tree bark.” — Nicole Asali tweet this

Asali’s journey to a plant-based diet began while helping a friend battle the autoimmune disease lupus. Her friend asked if she could prep meals based around the stringent alkaline diet.

“I realized that even though I was a chef, I didn’t know much about food in general and what it does to your body,” she said.  “What is good and bad for you? There are so many idiosyncrasies to know what you should eat and how you should eat. We ate salads for three days and gave up.”

Her friend died due to complications from the disease a few months later, and it sparked Asali to learn more about plant-based cooking.

“I was serving her death bed because it was comforting,” she said. “Food is where we go when we’re going through something like that. I decided that I wanted to play with it more. … I just wanted people to be interested in a lifestyle change. I think it has a really bad rap, especially in the African-American community, where if you talk about not eating meat, that’s blasphemy if you’re not putting ham hock in your collard greens.”

Asali replaces the ham hock with either black-eyed or purple whole peas because she liked the way its natural umami flavor mimicked ham in the greens. 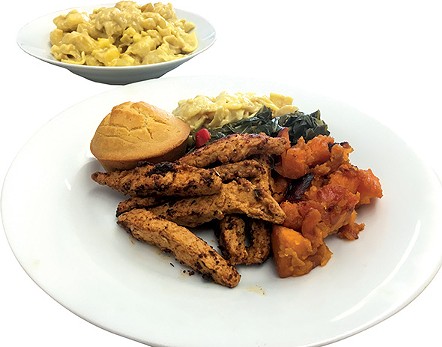 Health Koncious’ candied yams are coconut oil-based, but based on a technique used by her grandmother. The yams are stewed with maple syrup and amber agave on low heat until the mixture reduces down into almost a compote texture but gets a nice caramelization on the bottom.

Seitan is protein-dense wheat dough that has been removed of starch and been used as a meat substitute for more than a thousand years. A 100-gram serving of seitan has 75 grams of protein, 150 percent of the recommended daily intake. Asali is sure to pack her Cajun seitan bites with plenty of nutrient-rich organic herbs and spices from Savory Spice Shop, 4400 N. Western Ave.

“[Seitan] can usually mask the texture, but the flavor is usually missing in the food [in other preparations]. It blows my mind because seasonings are great for you,” Asali said, noting that capsaicin found in cayenne pepper and other chili-based spices has a variety of health benefits, including a boost to metabolism and blood vessels.

With Health Koncious, Asali hosts pop-up dinners and cooking demonstrations and does educational outreach to children. One of her favorite activities is to demonstrate to children how to make vegan cheese sauce made from fermented almonds, nutritional yeast and other spices.

After the holidays, Asali said that Health Koncious is aiming to be able to ship its weekly meals through FedEx to cut down on personal delivery routes from her team of drivers that have had to serve a growing clientele.

She said she gained a lot of potential clients after appearing at September’s inaugural OKC VegFest.

“VegFest was a huge impact,” she said, noting that more people — especially those in the millennial generation — are adopting a “flexitarian” diet and eating vegan multiple days per week.  “Sometimes you doubt if there is a demographic in Oklahoma, and the VegFest proved that there is a huge demand for it. … Most of my clientele aren’t [full-time] vegans. It’s people trying to transition, people who have diabetic problems, thyroid problems.”

Asali said that the hardest part of transitioning to a plant-based diet comes in the first few weeks, but slowly, the body begins to crave new types of food.

“My mind had shifted,” she said. “I would want a big ol’ plate of greens before I would want a big brontosaurus [steak]. I’m not a militant vegan. I just want people to be open to it or to go vegan three days of the week.”