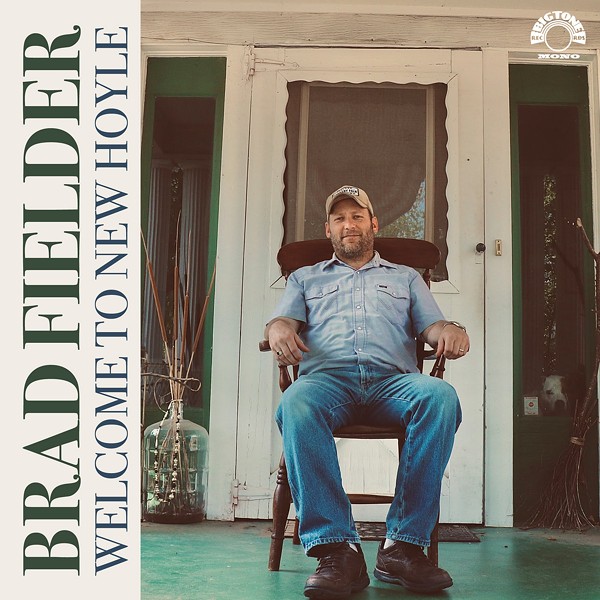 Old-fashioned doesn't necessarily mean outdated, as Brad Fielder continues to prove on his new full-length album, Welcome to New Hoyle. Sure, there are hokey tunes in the bunch that seem like silly nostalgia at first blush, but many of them have strong notes of relevance behind their yokel veneer. These Fielder originals speak to more than mere farmstead tomfoolery.


With a percussion-less band comprised of Kansas City duo The Matchmakers and Normanite sousaphonist Charley Reeves, Fielder presents 12 tunes in glorious mono. Guitar, banjo, mandolin, and fiddle fill out a style he has been fine-tuning for years. When Oklahoma Gazette last checked in with Brad Fielder for 2016's The Banjo Tapes, he was nearing the end of his lo-fi solo period, characteristic of cassette tape hiss and homebrew DIY mixes. Since then, he has tried on the full studio treatment (2018's Country Folk), the quartet jug band approach (2020's Brad Fielder & the Empty Bottles Boys), and a thinly-veiled political solo record (2017's Vernacular Songs). All of these EP releases inform the comfort zone he's struck with Welcome to New Hoyle, which combines everything that worked about his previous efforts into a definitive LP.


Along the way, he has also modified his vocal style, which now yodels, growls, and chuckles through his songs. This might ring false if he wasn't such an earnest entertainer, and his songwriting does plenty to sneak in thoughtful ideas amidst novel concepts. "Some Old Fart's Toolbox," for instance, is about the obscure findings in its namesake, but it's also a rare celebration of clutter and resourcefulness in the forgotten recesses to which elders are often relegated. These little unspoken messages are all over the album, and they don't see any need to lean into metaphor when nuts-and-bolts storytelling does the job more efficiently.


Some songs in the new collection like "Little Man" and "Old Brown Dog" have been in the Brad Fielder repertoire for years and have seen many renditions over time. Fielder also includes an eerie new arrangement of a lesser recognized iteration of "Roll on Buddy," a traditional mountain tune from around a century ago. For all of the older tunes, which continue to evolve with Fielder as an artist, there are also new never-before-recorded songs like "Forgetter's Prayer" and "Moteezie Blues." Welcome to New Hoyle is a splendid mix of new and old, just like its title — Fielder invented "New Hoyle" as a fictional place that his music represents, harkening back to an old town in which his Okie grandparents once resided. That town was called Hoyle before it was renamed Ames in 1902.


There's a reason that many of Fielder's musical heroes have recordings painstakingly documented by the Smithsonian. It's not just because he draws inspiration from the common-person stories in anything from Appalachian folk to Delta blues (which he admirably incorporates into his work without appropriating it). It's not just because he believes in the preservation of this historical art form. No, what really resonates in this connection is the timelessness of it. When an American song is of the people, by the people, and for the people, it endures.