“It gives us the ability to cook 100 eggs and have them ready to go,” Desjarlais said. “It’s just a more efficient way of cooking.” 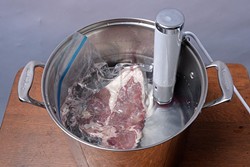 Sous vide is not the next Slap Chop.

Every Christmas, home chefs are inundated with “useful” gifts that are supposed to make cooking easier and more enjoyable but instead end up as clutter.

This year’s must-have food gadget is an immersion circulator or sous vide machine, and it has a much bigger impact on how people cook, said Geoff Adleman, Sansaire vice president of operations. But it isn’t really a new technology.

While the words are French — sous vide literally translates to “under vacuum” — the method was somewhat accidentally invented by Massachusetts native (and British loyalist) Sir Benjamin Thompson, Count von Rumford, in the early 1800s when he tried to cook a leg of mutton at a precise temperature to prove how poorly kitchen fireplaces worked.

French scientist Bruno Goussault, who spent much of his career perfecting the technique, resurrected it in 1971.

Sous vide cooking is similar to poaching in that a chef slowly brings the cooking medium, in this case water, up to a steady cooking temperature. Cooking on the stove or in the oven is usually done at high heat in order to cook the center of the food, requiring precision timing to make sure everything is cooked without being overcooked.

In contrast, sous vide cooking is done at an exact temperature for longer periods of time. Food is either vacuum-sealed in plastic or simply cooked in food-grade plastic bags with as much air removed as possible to keep water out and flavor in.

Vacuum sealing technology found its way to home cooks in the 1990s, but commercial-grade sous vide cooking equipment only recently became affordable for residential use. 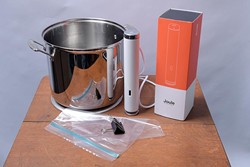 Chae Modern Korean executive chef Taylor Desjarlais had read about sous vide cooking before, but his hands-on experience with the technology came as part of the Coach House Apprenticeship Program when he worked with The Hutch on Avondale executive chef David Henry.

“David taught me how to use it properly,” Desjarlais said. “He showed me what it could do.”

“The main thing we use it for is the eggs that go in the bibimbap,” he said.

Chae’s popular iron bibimbap is a base of toasted rice covered in tender beef short rib and seasoned vegetables and topped with a sous vide egg. The white of the egg is perfectly set while the yolk is creamy, almost like fudge.

“It gives us the ability to cook 100 eggs and have them ready to go,” Desjarlais said. “It’s just a more efficient way of cooking.”

Much like a barbecue pit, sous vide cooks foods at low temperatures for a long time, but the constant temperature of a water bath is much easier to control than a smoker fueled with wood and coal.

“Something like a pork shoulder or a whole leg of lamb would have to braise for hours. And you have to take care of it while it’s cooking,” Desjarlais said. “Sous vide lets you look up times and temperatures online. You can cook it for the minimum amount and it’ll be done or you can leave for hours after and it won’t overcook.”

It takes some advance work, but he said sous vide is ideal for home chefs who worry about over or undercooking meats. It’s even great for making sauces, such as hollandaise, that intimidate some cooks. (See the recipe at the end of this article to make your own.)

The technology for home sous vide cookers has been available for a while, but someone had to make the leap and trust the consumer would be there.

People like Sansaire founder Lukas Svec brought it to home kitchens. Svec dropped out of a Ph.D. program and used a Kickstarter crowdfunding campaign to help bring a consumer-friendly sous vide cooker to fruition.

The company is readying its second-generation device, Sansaire Delta ($199), for a 2017 debut. In the meantime, other companies have created their own versions. ChefSteps released Joule ($199) earlier this year, and Anova sells both Bluetooth ($149) and Wi-Fi-enabled ($199) Precision Cookers.

“The idea of cooking something perfectly never goes away,” he said. “Steaks are probably the gateway food for sous vide. That’s what gets people hooked.”

Though it takes planning, a two-inch-thick T-bone cooked to a perfect medium-rare in about two and a half hours. While the meat cooks unattended, Adleman said, home chefs can focus on making side items or creating a special cocktail.

Dejarlais said it’s a pretty impressive feat for a machine that’s basically a fish tank pump with a thermometer.

“When we were at [The] Lobby [Cafe & Bar], we used to do 72-hour short ribs. They were the most tender things on the planet,” he said. “Every piece is perfect.”

Dice the shallot and add it and the champagne vinegar to a pan and reduce by half. Strain out and discard solids. Add the shallot-infused vinegar and all remaining ingredients into a gallon-size resealable zipper storage bag. Place in a water bath at 167 degrees Fahrenheit or 75 degrees Celsius for 30 minutes. Blend the contents of the bag at a high speed in a food processor and serve immediately.