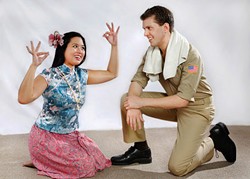 Around 2005, long before Angela Prock was directing the classic Rodgers and Hammerstein musical South Pacific at Jewel Box Theatre, she made her community theater debut as part of the ensemble cast for the same show at the same theater. Her role as Nurse McGregor wasn’t a huge one, but she was thrilled about it anyway.

“Really what was on my mind was, ‘How can I better myself as an artist so that I can go out to the world and be a good performer and a good part of the community?’” Prock said.

The popular World War II-era musical is set on a small Polynesian island where members of the military and resident islanders confront issues stemming from prejudices as they relate to interracial relationships.

Prock directs South Pacific, Jewel Box’s last production of the 2016-17 season. The show runs Thursday through May 7 at the theater, 3700 N. Walker Ave.

South Pacific was one of three shows Jewel Box presented Prock with after she expressed interest in again directing with the company. Prock said she knew she wanted to do South Pacific because of the emotional connection she has with the production.

“It’s really near and dear to my heart because it’s what launched my career as an artist and as a director,” she said. “It all just came together and made sense.”

She actually returns to South Pacific with some of the same faces that appeared in her 2005 debut. Twelve years ago, Scott Hynes played Seabee Luther Billis in Prock’s debut. Now, Hynes plays Emile de Becque, the French expatriate who falls in love with United States Navy nurse Nellie Forbush (played in the 2017 production by Katie Sperry).

Other cast members include Jeremy Small, who portrays Lieutenant Joseph Cable, a young Marine who falls in love with Tonkinese woman Liat, portrayed by Hannah Descartin.

Prock said the current political and social climates make South Pacific as relevant as ever.

“South Pacific is a show about not judging a book by its cover and not being prejudiced,” she said. “I think Nellie and Cable both struggle with understanding someone else’s walk in life and finding a way not to be prejudiced or not letting your life suffer because of other people’s views.”

The production is expected to be one of Jewel Box’s most popular shows of the season and, at press time, was close to selling out.

One of the director’s favorite things about working in theater is forming a tight bond with a new group for each new show she’s involved in. She has especially enjoyed working with the South Pacific cast and crew.

“We’re lucky as theater artists to create a new family every three months,” she said. “That creates a really nice world for us.”

South Pacific closes out Jewel Box’s 59th season. As the company heads into a landmark 60th year, Prock said a family atmosphere is what has come to define Jewel Box for her.

“It’s more than 10 years later, and I’m working with people I worked with 10 years ago,” she said. “I think that is one of the most beautiful things. Their family is connected; they all come back.”