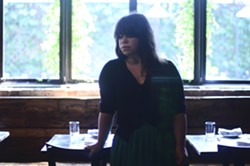 Music — especially the folk and roots sound emanating out of the South during the past half-century — has always been more than chords and lyrics to Oklahoma City native Josh Stratton.

It’s an undeniable truth fundamental to who and what we all are, and with the Southern Sound Concert Series, he’s intent on reminding everyone who will listen.

“What I like about it as a whole is the honesty of its mistakes and acceptance of its failures and attempt to grow from them,” Stratton said. “It’s important to remember that we all fail at times, and this genre of music does a great job of breaking down the barriers and creating an honest encounter with the listener. That’s a beautiful thing that isn’t spoken about enough.”

Working as a booking agent and tour manager for nearly a decade before returning to Oklahoma in 2013, Stratton helped spread that message as part of his job description.

He can’t help but feel the itch to do the same even now, and he found the perfect partners in Hunter and Blake Merritt (owners of presenting sponsor Prairie Wolf Spirits in Guthrie).

The team seeks to shine a spotlight on local and national touring musicians in different venues across the city in a six-concert series that will unfold over the course of 2015.

“This style of music is really important to the fabric of America,” Stratton said. “And there’s such a rich history of incredible musicians in Oklahoma. You look at the days of Leon Russell and J.J. Cale — there’s always been something about the spirit of the state that’s inspired musicians to create music that is truly organic and represents the honesty of struggle.”

It brings new voices in modern, Southern-bred music into the conversation from across the country in small to mid-sized venues Stratton sees overlooked and identifies OKC as a market poised to support more of this art than it has.

“They’ve done the hard work. They’ve made Oklahoma relevant again at a national level,” Stratton said. “We want to magnify that to people here that might not know.”

And in a way, the team behind Southern Sound believes the series is a thank-you to the voices that have restored Oklahoma’s place on the throne.

“We’re going to cater to the needs of the artists,” Stratton said. “If they can’t support their way of life, their music dies, so we want to facilitate their growth as artists.”

Rubbing elbows with touring acts is one part of that equation, too.

“I think it’s really important, connecting to those touring artists,” Stratton said. “From what I’ve seen in my experience, stuff like this can be a stepping stone for all parties involved.”

Of course, it’s also about the fans. Stratton and the Merritt brothers want to create one-of-a-kind listening experiences, special, multi-layered events that celebrate music and camaraderie of fans and creators alike.

“For scenes like this to work, they have to work in equal parts for the artists playing and the people attending. We want to create an environment that is better than what they are used to,” Stratton said. “It’s a concept that I don’t think Oklahoma has really seen before, and we’re excited to share it with them. It’s going to be different from what most concertgoers are accustomed to.”

The second show is in March. The venue and lineup will be announced in February.

The rest of the series will follow in two-month increments that Stratton said will bloom into something special.

“My experience overall has shown me what works and what doesn’t and how to grow something from a grassroots level to something that the whole city can be proud of,” Stratton said. “Really, what we are looking for is something that inspires people to slow down and stop the hustle and bustle and join other like-minded individuals to celebrate great music.”