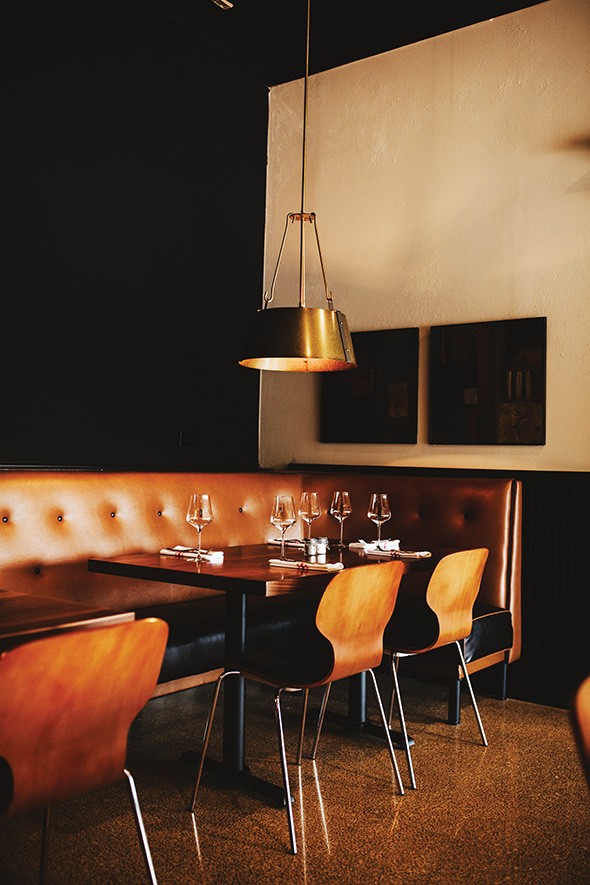 Sparrow Modern Italian represents a new era for Holloway Restaurant Group, but its successful foundation set with Cafe 501 and Boulevard Steakhouse still plays a role in its newest venture.

Sparrow, which takes its name from the national bird of Italy, opened at the end of May at 507 S. Boulevard St. in Edmond in the former Martini Lounge space that Peter and Sheree Holloway operated for 17 years.

The lounge closed at the end of 2018 and went through a renovation process that brought the windows all the way to the floor and did away with its awnings and window shades to brighten up the previously dark-by-design lounge.

“It was time for a remodel, and we thought that instead of just doing alcohol sales at the lounge, we felt an Italian restaurant was the way to go,” said Peter Holloway, who opened Pepperoni Grill, Oklahoma City’s first brick oven pizza restaurant, in the early 1990s. “[Pepperoni Grill] was modern in that it wasn’t typical meat sauce and spaghetti; it was on the cutting-edge, but Sparrow has taken it to another level.”

Sparrow offers modern Italian food in a space to match; its interior is cosmopolitan with new seating and a bright color palette.

Holloway’s son Jeffrey is executive chef at Sparrow, where he worked with Cafe 501 executive chef Joel Wingate to create a menu built around housemade pasta, salads, entrees and pizza.

One of Cafe 501’s signature bakery items is its 501 rustic bread, featuring a sourdough starter that Sheree Holloway has kept alive for 25 years, and it played an important role in the development of Sparrow’s pizza crust.

“I kept playing with the dough, and I wasn’t thrilled with it,” Wingate said. “I decided to use the rustic starter in the pizza dough, and every since then, it’s been light and crispy; it’s everything you want in a really good pizza. It’s cool how it’s all connected. Sheree’s baby is that rustic bread, and we’re paying homage to her in as many ways as possible.”

Sparrow offers five types of pizza with familiar ingredients like pepperoni, but the restaurant makes them unique with style and preparation. The crispy pepperoni pizza tower features a layer of pepperoni as it goes into the oven, but it is then topped with a handful of fried pepperoni.

“The pepperoni wasn’t our top seller until we put up a photo on social media, and now a ton of people are ordering it,” Wingate said.

It also offers gluten-free and cauliflower crusts for its pizzas. A giant chicken Parmesan is pounded flat and served “pizza-style,” finished with arugula and pink peppercorn honey that is meant to share.

“The pomodoro sauce is very herbaceous and full of acidity that helps cut through the heavy dish on the chicken Parmesan,” Wingate said.

At its launch, Sparrow is making its stuffed pastas — mushroom agnolotti and blistered tomato ricotta ravioli — in-house, while the rest of its pasta — rigatoni with Bolognese sauce and spaghetti as a vehicle with pomodoro and meatball and cacio e pepe — comes locally from Della Terra.

“We’d eventually like to make more pasta in-house, but we didn’t want to overload the staff at the opening,” Wingate said. “[Della Terra owner] Chris Baker’s reputation speaks for itself, and if we’re not going to make it, we might as well use the best.”

"It was time for a remodel, and we thought that instead of just doing alcohol sales at the lounge, we felt an Italian restaurant was the way to go."—Peter Holloway tweet this

“It takes three hours to assemble and then sits under tin cans for three days so that the extra compression makes the layers smaller and it doesn’t fall apart,” Wingate said. “That was a hard dish to make because [the Holloways] are so picky about it because they love it so much.”

Gnocchi didn’t make the final menu at release, but while working with potatoes for a potential dish, Wingate said they came up with a new appetizer that deep-fries potato skins and serves them on top of pomodoro with gremolata topping. 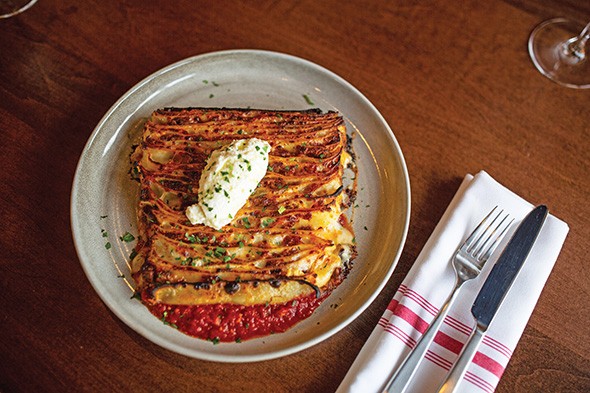 Sparrow wants you to save room for dessert and gives you plenty of reason to do so with its takes on classics like cannoli, tiramisu and meringue. It offers a DIY cannoli, where customers get to fill and coat the pastry shells with a variety of sauces, cream, fruit, nuts and sprinkles. The baked Italian meringue with lemon curd allows customers to crack open the outer crispy later and dip fruit into its gooey interior.

The restaurant prepares its tiramisu in small batches in the morning for service that day.

“You can see the ladyfingers individually,” Wingate said. “Sometimes when you get tiramisu, it is all mush because it’s made a couple of days in advance. We make it fresh so that there is still a bite to it, which is nice to have texture because tiramisu always lacks on texture.”

Wingate gained experience with Italian restaurants while working in Dalla and is excited to be back working with his favorite cuisine at an organization he enjoys. He has worked with Holloway Restaurant Group for six years.

“I couldn’t be more grateful,” Wingate said. “I feel like my experience is good, and I don’t want to run around from place to place like a lot of chefs. It feels good to be in a place that you’re comfortable, but also continue to learn; it means the world.”