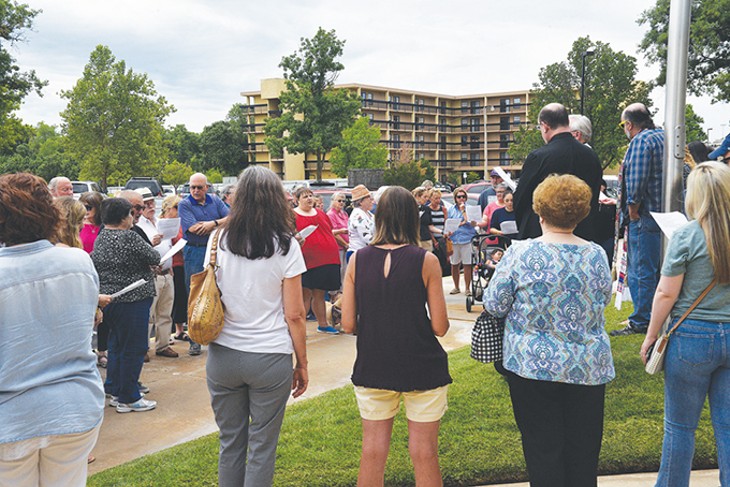 Michelle Stearnes was unable to attend a rally earlier in the week outside of U.S. Sen. James Lankford’s Oklahoma City office, but she could not let the week go by without being heard.

Stearnes, carrying a red sign reading “FAMILIES BELONG TOGETHER,” was one of several dozen people who showed up for June 20’s Vigil for Immigration Justice. The multi-congregational vigil — organized as part of the national New Sanctuary Movement by more than 800 faith communities in support of immigrants facing deportation — have been held weekly since January outside an alleged, unmarked U.S. Immigration and Customs Enforcement (ICE) office near the intersection of NW 56th Street and N. Portland Avenue.

While the vigils — which include hymns, prayer and words of encouragement from several faith and community leaders — have been going on for the past six months, there was a renewed sense of urgency among those who gathered June 20 related to reports of undocumented immigrant parents being separated from their children on the country’s southern border. Many of those children were kept in immigration detention centers.

“We need massive crowds now,” Stearnes said. “We need to fill this parking lot up with people who are upset about it.”

A few hours after the vigil, President Donald Trump signed an executive order halting border family separations. However, in accordance with a 1997 court settlement, the order only applies to the first 20 days of parents’ incarceration, and Congress will need to find a permanent fix. The order also does not describe how or whether children currently in detention center will be reunited with their parents.

Both Lankford, R-OK, and U.S. Sen. Jim Inhofe, R-OK, have voiced their support for the Keep Families Together and Enforce the Law Act, which would keep children with their parents as they progress through their legal proceedings.

Stearnes, who grew up in a farming community with exposure to several migrant families, said her initial reaction to hearing of the family separations was sadness and intense anger. She has long been against Trump’s harsh public stances against immigrants but is disturbed by the most recent developments. Stearnes committed to work on the weekend so she could take off to attend the vigil.

“It’s gotten so much worse, if that was even possible,” she said. “I was just like, ‘I’ve got to come down here.’”

The crowd gathered for the vigil was larger than had been gathered in previous weeks, but Stearnes said she would like to see an even stronger presence going forward.

“I think everyone needs to get out here and let it be known how they feel about this,” she said. “It’s not right, it’s not acceptable and it needs to stop right now.”

HollyAnne Weaver, a deacon-elect from Holy Spirit Eastern Christian Church (Orthodox), offered a prayer at the gathering. She said Hispanic people were being unfairly targeted by the policy and other groups who enter the country illegally are not subjected to the same treatment.

“It’s a policy that is completely flawed,” Weaver said after the vigil. “These children are going to be raised with separation anxiety and abandonment issues.”

Before the executive order was signed, U.S. Attorney General Jeff Sessions cited the biblical passage Romans 13 as justification for the separations while speaking with law enforcement officers in Indiana.

According to the New International Version translation, the first verse of the chapter reads, “Let everyone be subject to the governing authorities, for there is no authority except that which God has established. The authorities that exist have been established by God.”

Weaver took issue with Sessions’ scripture citation, saying that scripture also indicates that the law should not violate the will of God and that the separation of children from their parents is not Christ-like. She said she has no tolerance for the use of the Bible to justify inhumane acts.

“That’s what blasphemy is,” Weaver said, “and they’re doing it every day.”

"We know there are families who are being torn apart right under our noses in our neighborhoods." —Serena Prammanasudh tweet this

Trump’s executive order might have put a momentary stop to family separations at the border, but Dream Action Oklahoma (DAOK) executive director Serena Prammanasudh said the move left the local immigrant empowerment organization with lot to be desired.

“We don’t think the E.O. absolves the government from implementing an inhumane policy that separates children from their parents,” Prammanasudh said, “and it doesn’t change the fact that due process is a constitutional right for citizens and non-citizens.”

DAOK is organizing a Keep Families Together rally 1 p.m. Saturday inside the state Capitol, 2300 N. Lincoln Blvd. The rally was planned before the executive order as part of a national day of action by the national MoveOn advocacy group, and Prammanasudh said it will continue as planned because the order does nothing to reunite detained children with their parents or acknowledge a non-citizen’s right to seek asylum at the border. In addition to DAOK, the event is being locally co-sponsored by March On Oklahoma, Black Lives Matter OKC and Indivisible Oklahoma.

Prammanasudh said DAOK has not been contacted by any families affected by the family separating policies. She has heard rumors that some detainees might be moved to a facility somewhere in Tulsa, but DAOK had not been able to confirm that by deadline.

Still, Prammanasudh believes the impact is just as local. Many local migrant families live in fear of having their own family lives suddenly uprooted.

“We know there are families who are being torn apart right under our noses in our neighborhoods,” she said. “That’s just less visible to the American public, and that’s actually one of the main messages we want to get across at our rally.”

The highly covered and highly unpopular (only 28 percent of respondents approved in a local CNN poll) family separations moved a lot of people to demand action. Prammanasudh is happy for the fresh wave of momentum in support of immigrants but wishes it could have come in another way.

“These cries and the audio recordings of children crying out for their parents are definitely pulling at the heartstrings of Americans,” she said, “but it took that immorality and inhumane treatment for people to realize that it’s time to stand up for the immigrant community in this country and in this state.”

DAOK hopes increased interest in immigration can be channeled into interest in extending the Deferred Action for Childhood Arrivals (DACA) program that gives those brought to the United States illegally a two-year renewable permit granting them the opportunity to apply for a work permit and avoid deportation. The future of DACA has been in doubt since President Trump announced last September that the program would be ending, and the president’s requests that Congress find a solution have not made much progress so far.

Prammanasudh remains focused on DACA renewals at the local level. In fact, the Keep Families Together rally had to be scheduled at 1 p.m. because DAOK has Know Your Rights and DACA clinics already planned for earlier in the day.

Despite uncertainty in the future, Prammanasudh is optimistic about immigration issues going forward.

“I think that’s really the only option you have as a concerned resident of this country,” she said.

While it might seem like immigration issues are things that can only be hashed out in Washington, D.C., DAOK wants Oklahomans to realize that progress starts at home.

“That’s really what we want to highlight, that immigration is a federal issue,” Prammanasudh said, “but it can be attacked at the state level.”