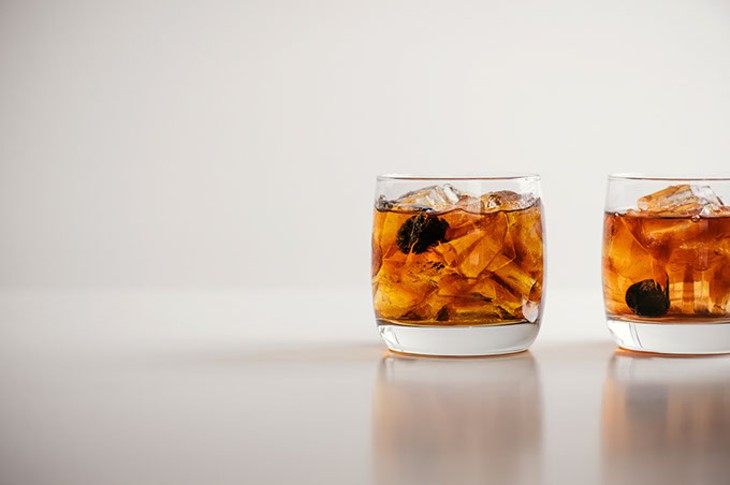 The last episode of Mad Men might’ve aired two years ago, but the era of bourbon and whiskey cocktails that it helped usher into the zeitgeist can still be felt, especially at Mary Eddy’s Kitchen x Lounge at 21c Museum Hotel, 900 W. Main St., which has a special dinner and drink menu in honor of National Bourbon Month in September.

As recently as 2002, the export market for all whiskey was $326 million and had fallen steadily for three decades, but now the export market annually tops $1 billion of the total $2.9 billion industry, which grew by 7.8 percent in 2015, according to Fortune magazine.

“The Old Fashioned is really popular, and we can be very thankful to Mad Men,” said Michael O’Hara, Mary Eddy’s assistant food and beverage manager. “I’ve worked in fine dining for awhile now, and after work, people would drink wine or scotch and it became, ‘I know more about scotch than you.’ A lot of people aren’t drinking scotch anymore, and a lot of people aren’t drinking wine. Bourbon is becoming extremely popular in our state and across the country.”

Bourbon plays a big role in the legacy of Mary Eddy’s owner, the 21c Museum Hotel chain, which was founded in Louisville, Kentucky, and co-founder Laura Lee Brown is the great-granddaughter of the founder of Brown-Forman, the largest American-owned liquor company.

It’s a common misconception that bourbon must be distilled in Kentucky, but the state does produce 95 percent. According to federal regulations, bourbon must be made with a minimum of 51 percent corn content, distilled to a maximum 160 proof and barreled in charred oak containers with no mention of location.

The bar at Mary Eddy’s stocks over 60 varieties of bourbon, some of which can be difficult to find. For a variety like a 24-year-old Parker’s Heritage Collection, the entire state of Oklahoma might only get six bottles, and Mary Eddy’s has two.

“A lot of these products are never posted in market,” O’Hara said. “It’s about making a call and knowing the right people.”

Bourbon is the feature of the month at Mary Eddy’s, where the spirit is the star of a special drink menu and the restaurant’s second Fork + Bottle dinner 6:30 p.m. Sept. 21 with a five-course special menu that includes six bourbon pairings. Tickets are $89 (plus tax and gratuity), and reservations are required.

“We’d don’t make a whole lot of money on these events. We try to make it as special as possible for the guest,” O’Hara said. “We want guests to feel like they ate way too much, drank too much bourbon and had too much fun.”

Executive chef Jason Campbell said he began to appreciate bourbon after living in Kentucky while working at a 21c hotel in Cincinnati.

“When [the temperature] starts to get cooler, you can start to smell the bourbon,” Campbell said with a laugh.

When preparing the Fork + Bottle dinner, Campbell was weary of cooking with bourbon because adding heat to the spirit denatures the flavor, negating the difference between 12- and 20-year-old varieties. Instead, he focused on highlighting individual flavor notes of bourbon in each dish.

The dinner opens with crispy Brussels sprouts with hot honey, feta cheese and lemon; a pork rillete; and crab hushpuppies in a mustard green aioli.

The second course, a beef tartar, mimics the smoky and citrusy notes of bourbon with burnt orange and a bacon fat crouton. The dish is served with an Old Fashioned featuring Old Forester 1870.

A squash panzanella salad arrives third and uses rye croutons as a nod to the rye used in bourbon. The drink pairings for this dish are a Sonoma-Cutrer chardonnay and a Woodford Reserve rye.

The main course is a cold smoked duck breast with a foie gras pierogi, cacao nib vinaigrette and charred cabbage.

“Duck and bourbon go so well together,” Campbell said, noting that the duck is smoked to mimic the characteristics of the charred bourbon barrel. “I’m Polish, so I have to do a pierogi. Using foie gras is an example of what we can do at the one-off dinners. It’s a high-end item that we might not get away with putting on our menu with the labor and everything, but it’s worth it to do it.”

“It’s almost a food cocktail because it has all of the same ingredients as an Old Fashioned,” Campbell said.

Coming up as a young chef in Orlando, Campbell said working in the hotel industry was frowned upon because chefs didn’t have much opportunity to experiment, as menus were often controlled by corporate to keep costs down. 21c gives Campbell a blank slate with which to experiment.

The same applies to its bartenders, who are tasked with creating six special cocktails available for the entire month of September. From the light and sweet Kentucky Rose, which combined Four Roses Bourbon’s yellow label and cucumber bitters to the Faint of Heart cocktail, which adds absinthe to Bulleit Bourbon, the drinks go from refreshing to heavy.

As a nod to the Presidents of the United States of America song, the Moving to the Country cocktail adds peach syrup and bitters to Maker’s Mark bourbon surrounded by a red wine float, which is all hidden under an amaretto foam.

For the harvest cocktails, bartenders concocted their own cider-cayenne syrup, and for the .357, like a more potent Revolver cocktail, they made a banana and coffee syrup.

“We’re trying to be funky and elegant,” O’Hara said.