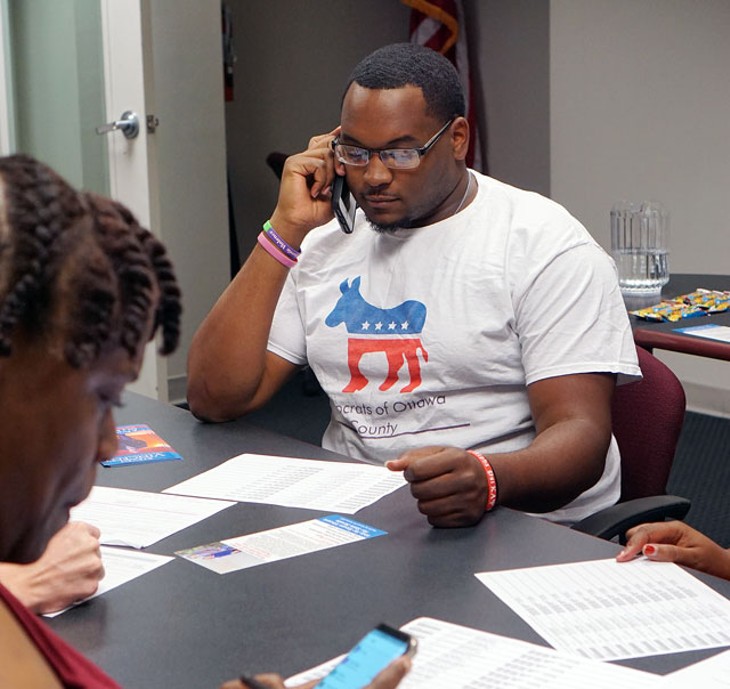 Not long after Rep. Jacob Rosecrants, D-Norman, arrived at the Capitol in September, legislators began asking the newly elected representative about what he saw and heard on the campaign trail from voters.

“What is the pulse?” Rosecrants asked, repeating the line he heard often from fellow lawmakers after they convened for a special session. “The questions were not just coming from my party.”

Over the summer, Rosecrants said he knocked on thousands of doors in Cleveland County’s House District 46. The door-to-door campaign marked the second time Rosecrants had canvassed the district to speak to voters. The educator first sought the seat during the November 2016 general election, losing to incumbent Republican Rep. Scott Martin. When Martin resigned to lead Norman Chamber of Commerce in the spring, Rosecrants filed again. He won the seat in a special election 60 percent to 40 percent, flipping the results in his favor after losing 10 months earlier.

“I can tell you straight-up what it is,” Rosecrants said while sitting in his Capitol office, which he shares with newly elected Rep. Karen Gaddis, D-Tulsa. Like Rosecrants, she flipped a Republican-held seat after the former seat-holder resigned amid sexual harassment allegations.

“It’s easy,” he said. “I am no politician. I am a teacher who got fed up with what’s going on with funding for public education. People agreed with me, both Republicans and Democrats.”

That aspect of Rosecrants’ victory didn’t make the headlines when the national press picked up the election results. Instead, what dominated the news was a Democrat flipping a Republican-held state legislative seat in a district President Donald Trump won by double digits.

Indeed, Trump won House District 46 by 11 points. Rosecrants does believe there was a “Trump factor” to his election as he heard frustrated and unhappy comments about the president at some doorsteps. However, he listened to more constituents who were discontent with state leaders over the state’s budget crisis, which served as his opening to proposing solutions.

It’s an interesting time in Oklahoma politics. In the November 2016 general elections, state voters rejected a sales tax increase to fund a teacher pay raise and a constitutional amendment to protect the rights of farmers while endorsing reforms in areas of criminal justice and alcohol.

Going into the 2017 Legislative Session, Republicans controlled 117 of the 149 seats as well as all statewide offices.

Everything can change in an instant, especially in politics. In February, state lawmakers arrived at the Capitol with knowledge of a near $900 million budget shortfall. This was the third consecutive year for a budget shortfall. It was a tumultuous legislative session that later went into an overtime stretch this fall to fill a $215 million hole. Over the past 11 months, nine state lawmakers submitted their resignations — four due to various sex and malfeasance scandals. So far, three of the four special elections proved to be big prizes for Democrats.

Next Tuesday, voters in Senate District 45, which includes portions of south OKC, Mustang and Yukon, elect a replacement for former Sen. Kyle Loveless, who resigned under a criminal investigation over allegedly embezzling of campaign funds. Also, voters in northeast Oklahoma will fill one Senate seat and one House seat.

The state’s budget situation has and will likely continue to play a role in special elections, explained Richard Johnson, a political science professor at Oklahoma City University (OCU).

“The Legislature’s inability to function well over the past three years during a down economic cycle, there are some very frustrated individuals about that,” said Johnson, who stated he had not seen exit poll data and his conclusions were based on anecdotal evidence.

Frustrated voters don’t equate to an “anti-Republican wave” sweeping through the state, Johnson said. In recent elections, Democrats have tapped into voter frustrations by campaigning on resolving the state’s budget crisis and restoring school funding. The three most recently elected Democrats — Rosecrants, Gaddis and Sen. Michael Brooks — had run before.

“A lot of these folks develop name recognition by running once with credible campaigns, which drives up their voter recognition,” Johnson said. “For Democrats, it has been a good strategy and luck has fallen to their laps a little bit.”

A political trend to watch is the Democratic tilt growing in the urban centers of the Oklahoma City metro, explained Johnson. In 2016, Democrats won two GOP-held legislative seats in OKC: House District 87 in northwest OKC and House District 93 in south OKC. Johnson also pointed to the 2016 presidential election results of Oklahoma County, where Trump earned 51 percent of the vote compared to Hillary Clinton’s 41 percent.

“As Oklahoma City continues to grow at a quick pace — as we get more people from the outside and millennials — that does help the Democratic Party out,” he said. 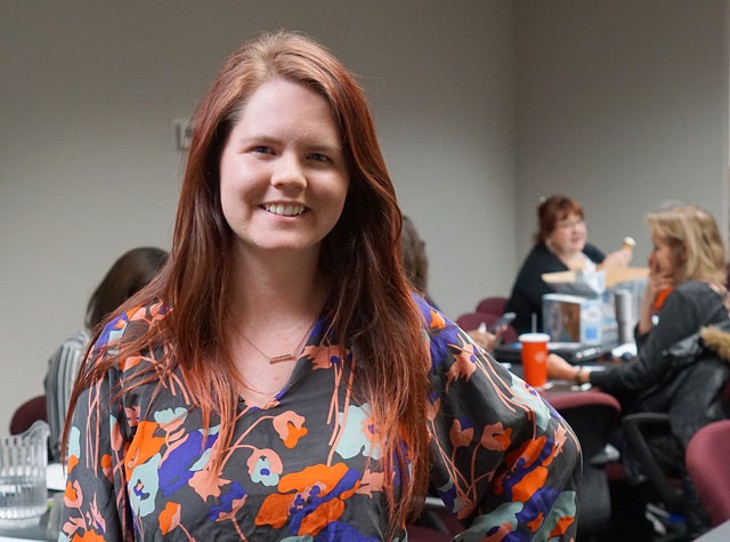 Months before talks of special elections, the state’s Democrats were stirring and reenergized. The main reason was the 2016 presidential results.

“We’ve had a huge influx of participation,” said Anna Langthorn, chair of the Oklahoma Democratic Party.

“There is definitely something happening where people are waking up to the fact that things are really bad, but they can do something about it,” Langthorn said.

When lawmakers began handing in resignation letters, not only were volunteers ready and eager to get involved, but also the party had strong, community-focused candidates ready to jump into campaigns. With grant funding from the Democratic National Committee, two field organizers were placed in the state to work with special election candidates.

“I think one of the biggest advantages we have in special elections is the opportunity to talk about state issues,” Langthorn said. “Our candidates, who are uniquely situated to their districts in one way or another, built meaningful relationships with their constituents and talked to them about the day-to-day issues of their lives. I think that’s what made the difference.”

As the party has concentrated on special elections, its attention is also drawn to next year’s elections, where all statewide offices, including governor, lieutenant governor and attorney general — as well as many Legislative seats — will be on the ballot.

“We’ve done a really good job focusing on what is the most pressing [issue], which is the budget,” Langthorn said. “We are pushing for restoring the gross production tax at 7 percent, which we know is fair and meets the needs of Oklahoma families, as opposed to shifting the tax burden on low-income and middle-income families.”

In early 2015, the state’s voter registration rolls showed that for the first time, Republicans outnumbered Democrats. Republicans’ edge in voter registration continues to grow. Pam Pollard, chair of the Oklahoma Republican Party, links the party’s growth with its message of efficiency and accountability in government.

Over the past seven years with Republicans controlling the governor’s office and both chambers, the focus has been to reform government, which has included tort, pension and workers’ compensation laws as well as dropping the income tax rate, Pollard explained.

“We have done the reformation of the infrastructure [of government],” she said. “Now, we are focusing on the people and the services of our state: our health department, DHS, mental health, higher education, lower education and corrections. We are going to be focused on doing the same reform.”

“Democrats have something to fight for right now,” she said. “They feel they are under-represented in the state Legislature, and they want to get more Democrats in the Legislature. They have an incentive to get out there, whereas Republicans think everything is going great. Yes, we do have some issues we are facing right now. Generally, Republicans think everything is going good, and now the mindset is Republicans always win.”

Under such a mindset, Republican voters don’t show up at the polls like Democratic voters.

When voters know the GOP’s message and when their voters turn out, “[they] win elections and … win them by a majority,” Pollard said. 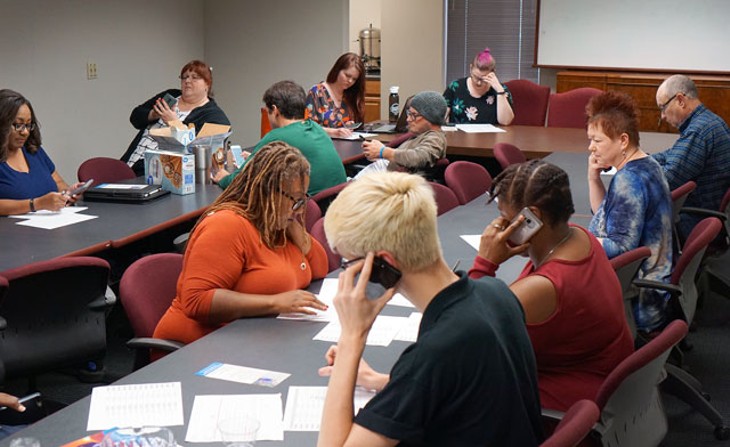 All eyes are on Republican Paul Rosino, a real estate agent, and Democrat Steven Vincent, a first responder for the Oklahoma City Police Department, as their campaigns enter the final stretch of the election for Senate District 45. Polls are open from 7 a.m. to 7 p.m. Tuesday.

Taking a play from Rosecrants and Brooks, who flipped a Republican-held south OKC Senate seat this July, Vincent has knocked on thousands of doors, which has granted him a front-row seat into the lives of every day Oklahomans.

“I think people in Oklahoma are waking up and seeing a direct correlation between the extreme cuts the majority party implemented over the last five years and a direct result it has had on them, their family members, their schools and their communities. They don’t like it,” said Vincent, who believes the special election win has reclaimed pride in Democrats.

Will voters’ frustrations over the state’s ongoing budget crisis translate to success at the ballot box for Democrats? In some House and Senate districts, it already has. The question now is, Will it continue?

Print headline: Vote swings; Special elections offer a glimpse into Oklahoma’s political battles only a year away from statewide elections.