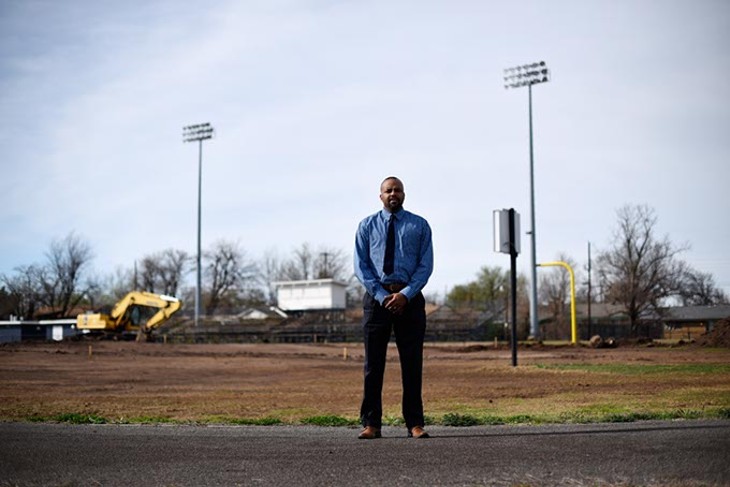 Here’s to the school we love,

In the mid-1990s, as a student wearing the Bobcat blue and white, Anderson heard the song countless times on the basketball court, especially during the 1995-96 season. That year, Star Spencer earned a state basketball championship.

Winning a state title stays with a person, as does loyalty, pride and commitment. In Spencer, those life lessons resonate among the 3,912 residents. The community’s environment and its people have a profound effect on shaping youth character.

“Spencer is a loving community that embraces the sense of community,” said Anderson, who graduated in 1997. “We strive for excellence. We want to set the bar high and then exceed it. … There are a lot of good people in Spencer.”

Anderson’s love for Star Spencer runs deep. It’s also the alma mater of his mother and uncle. His passion ignited upon his return as a volunteer coach and mentor with the school’s basketball program during the 2007-08 season.

“I am advocating for the entire community,” Anderson told Oklahoma Gazette. “It was on my heart to build a relationship [with the district]. People had done it before me, but I wanted to be consistent. I felt like I could bring things that [district leaders] might not be aware of.”

Nicknamed “The Good Neighbor City,” Spencer is located 10 miles from downtown Oklahoma City, and its residents have close ties with their schools, said Cindy Van Kley, president of the Spencer Chamber of Commerce.

“Contrary to most of the other school areas in the Oklahoma City district, Spencer really does have a sense of community,” said Van Kley, a resident since 1979. “It is a town, not a suburb and not a neighborhood school. Families go back generations. The city just celebrated its 113th birthday. You get the sense that most people who live here went to school here.”

After a public vote in 1960, Star Spencer joined the OKCPS district. More than 40 years later, residents fought to keep their schools with OKCPS and not join other neighboring districts. Loyalties lie with the schools as well as the district, but at times, the community feels left out when it comes to education facilities, school supplies and resources.

On a mild and breezy late February evening, hundreds of parents, students and community members made their way into the Star Spencer auditorium for a presentation by the district and The Foundation for Oklahoma City Public Schools. Fliers displayed around the school shared a special announcement concerning the Star Spencer Athletic Complex and Partners in Action, a joint program between the district and foundation.

The presentation by Tim McLaughlin, founder of Fields & Futures, brought roaring applause. The nonprofit organization has helped rebuild more than a dozen OKCPS athletic fields, and its sights are set on Star Spencer. This summer, students will find a rebuilt football field in Carl Twidwell Stadium. More improvements will follow with reconstructed baseball and softball fields, and the stadium’s track will have new asphalt.

McLaughlin told the crowd that the mission of Fields & Futures extends past green fields.

It’s welcome news to the Spencer community, known to pack stands during home football games and exercise on the track. Principal Chris Gardner said the athletic complex has needed a boost for years.

Fourteen years ago, Star Spencer welcomed back Gardner, who also is an alumnus, to serve as assistant principal. He spent the last eight years as principal of the school of 376 students.

“This is well overdo, and I am excited. … My first year at Star Spencer, during the last home football game, we had to play the football game with a vehicle [with headlights on] parked in front of the ticket sales,” he said of the aging facilities. “The score clock ran out. We had to keep time manually.”

Others see the Fields & Futures partnership as a catalyst for more to come. At the Feb. 25 event, foundation leaders presented Partners in Action, a program that gives business, organizations and individuals an avenue to support specific classrooms and schools.

“We have a unique opportunity on our hands,” said Spencer Mayor Earnest Ware. “It will take everyone — parents, the city and churches — to make this move into fruition.”

In this small community, many residents already rally to build strong school programs. As a Star Spencer volunteer, Van Kley knows many who help the schools. She named the school’s active athletic booster club and parents who volunteer with its fine arts program. However, there is always a need for more community volunteers.

“So much of the extracurricular activities at the schools require volunteers because there is not a lot of funding from the district,” Van Kley said. “A lot comes out of teacher pockets or parent pockets. That’s just the way it is.”

Anderson believes it’s a different dynamic as communication lines open between district leaders and the Spencer community. Anderson is a staple at the district’s board of education meetings. He said he likes what he hears when it comes to decisions impacting the Spencer schools, but it will take time, especially as the district works with fewer state dollars.

“We are working to get there,” Anderson said as he viewed a bulldozer parked near Carl Twidwell Stadium.

He stood about 20 yards away from the school’s sign, which read, “Be a part of the change you want to see.”

“We have partners, like Fields & Futures and Partners in Action,” he said. “The district is making investments. We will get there. … Our kids deserve this. Our community deserves this.”