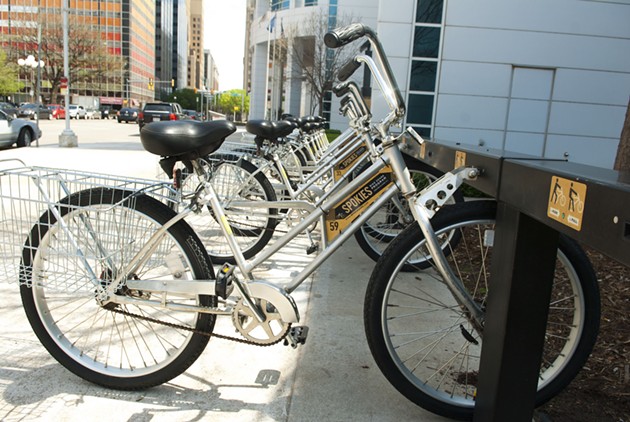 Spokies, the two-year-old bike share program, has demonstrated a steady rise in ridership and will be managed entirely by the City of Oklahoma City this fall.

The city currently oversees the Spokies program, which is managed day-to-day by Downtown OKC, Inc. The Oklahoma City Council approved a proposal during Tuesday’s meeting to bring the bike share program under control of the Central Oklahoma Transportation and Parking Authority.

“[Downtown OKC, Inc.] did an incredible job,” said T.O. Bowman, the city’s sustainability director. “Bringing it under COTPA makes sense because of the relationships [bikes have] with transit.”

Launched in May 2012, Spokies’ ridership reached 7,328 in its first year. Year two saw over 11,000 riders, according to ridership figures from the city. The Spokies program is also expected to finish in the bl

Mayor Mick Cornett cast the first fishing line to dedicate the opening of the park, which includes a new entry drive and parking lot, two picnic areas and other enhancements. The majority of funds for the improvements came out of the 2007 general obligation bond.

Tax breaks for Cabela’s  A green light was given by the Oklahoma City Council for negotiations to take place between the city and Cabela’s for tax incentives to develop a new store in northwest OKC.

In a report to the council, the city manager’s office recommended $3.5 million in tax breaks for the national retailer.

The council voted 7 to 1 to have the Economic Development Trust negotiate the details of the tax incentives, but Ward 2 Councilman Ed Shadid, who was the lone dissenting vote, accused Cabela’s of extortion in its push for tax breaks.

“This [deal] is to keep them within the city limits with the explicit threat that [Cabela’s] would go to another municipality like Yukon [without the tax incentives],” Shadid said. “How would that not fall within the d

efinition of extortion?” Shadid has regularly questioned the city’s use of tax breaks to attract business and said Cabela’s would come to OKC even without tax incentives.

“I think at some point you’ve got to resist,” Shadid told the council. “This is basically bullies on the school ground wanting our money.”

Ward 1 Councilman James Greiner voted in favor of the incentives but expressed similar concern for the practice.

“I am certainly not a fan of incentivizing retail,” Greiner said. “This is basically where cities get into the private market and influence private companies to do what we want them to do.”

However, Greiner said the practice was a necessary evil and said the state Legislature should address the issue.

“The state is forcing municipalities to compete for retail because our general fund dollars come largely from [sales tax],” Cornett said. “It’s making cities reliant on sales tax that is forcing this.”

City Manager Jim Couch said Cabela’s was expected to generate nearly $2 million in additional tax revenue to the city, even with the proposed tax breaks.