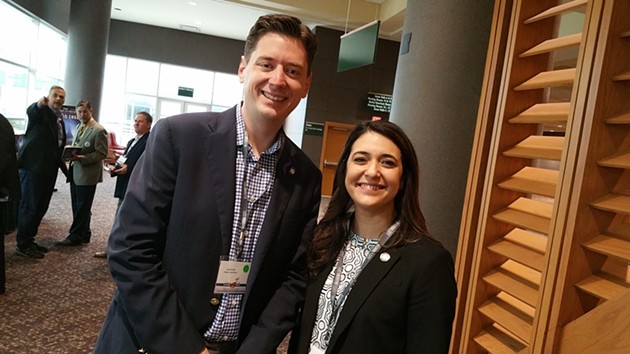 “We are ceding the cities to our opposition," Holt, R-Okla. City, said during a short speech at the Southern Republican Leadership Conference on Friday. “Why should you want to compete in cities? Because that’s where the voters are, that’s where people live.”

While Republicans celebrate majorities in the U.S. House and Senate, and hope to make a run at president in 2016, Holt told the crowd just 15 of the nation’s largest 100 cities have Republican mayors. Urban cores tend to lean Democrat at the polls and two thirds of the nation lives in those 100 largest cities, Holt said.

“Most [of America] looks up and sees a Democrat providing their community’s core services,” Holt said. “This is a missed opportunity.”

Earlier in the day, Oklahoma City Mayor Mick Cornett welcomed SRLC attendees and remarked that his city was on a nearly 28 year run of Republican mayors. Cornett received applause when he said Oklahoma City had invested millions in capital projects without debt through the MAPS sales tax program.

Holt said cities should be a stronghold for Republicans because it's about providing core services and getting out of the way.

“[Cities] bring you drinking water, they pick up your trash, they build your roads and provide you with police and fire protection, and then they get out of the way,” Holt said. “That’s what we as Republicans believe in; bringing you the core services that only government could and should provide and then get out of the way.”

Sen. Stephanie Bice, another Oklahoma City Republican, also addressed the conference and said the party should do more to reach out to potential female candidates for office at every level. Bice said studies have shown that contributing to a lack of female candidates is a feeling of being unqualified to serve, not understanding the election process and needing to be asked multiple times.

"Instead of working behind the scenes, women need to come out front and lead," Bice said.