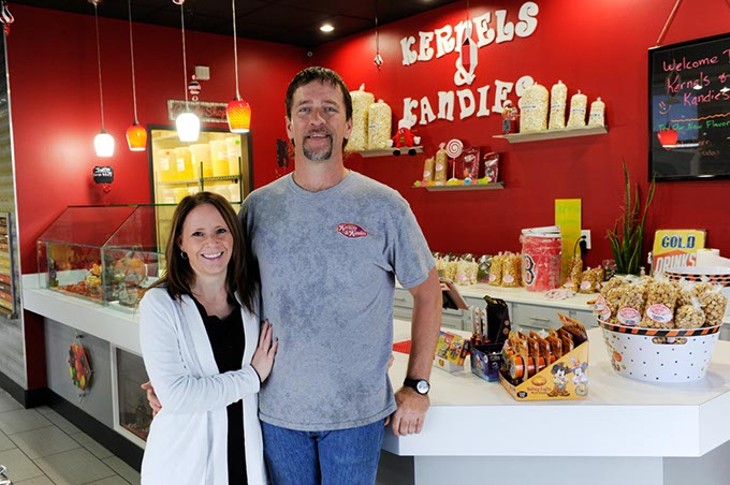 Every once in awhile, a new business resonates with its patrons to such a degree that they wonder how they lived without it. For many, Oklahoma City’s Kernels & Kandies, 7002 Northwest Expressway, Suite B, is that place.

Founded in April 2014, it offers more than 50 flavors of homemade, award-winning popcorn. Co-owners Stacey Mott and Ron Lynch (currently engaged) said they spent more than a year researching and testing their recipes to weed out wax-containing chocolates, vet vendors and build their selection.

They said the shop’s clientele has recognized their dedication to craft.

During a recent visit, Mott and Lynch engaged guests as they handed out popcorn samples. Customers, Mott said, often make flavor recommendations to each other, too.

At least six Midwestern cities (Ridgway, Illinois; North Loup, Nebraska; Marion, Ohio; Valparaiso and Van Buren, Indiana; and Schaller, Iowa) claim the Popcorn Capital of the World crown, and Kernels & Kandies owners might have unintentionally entered Oklahoma City into that realm, too. They admitted they created a cheese-and-caramel recipe with a flavor that resembles a version that, until recently, they imported from Illinois.

“Most can’t tell a difference,” they said.

Fifty-four color-coordinated cylinders, each containing a different flavor, line what they call The Wall of Popcorn. Vintage candy brands like Abba-Zaba, Slo Poke and Black Cow adorn the venue’s other walls, along with sodas and Mott and Lynch’s assortment of homemade fudge.

In the shop’s center is an island of mix-and-match hard candies, gummies and chocolate-centered sweets assorted by color.

The couple also will custom-make flavored fudge upon request.

Mott and Lynch make time to connect weekly with current and prospective candy vendors to keep the selection quirky and on-trend.

When they find sweets that pique their interest — like Jelly Belly’s BeanBoozled game — often, they interest their customers, too. The game allows players to try flavors of jelly beans that may or may not represent their lookalike counterparts, such as Tutti-Fruitti (stinky socks) or lime (lawn clippings).

“It flies off the shelf,” Mott said. “We can barely keep it in stock.”

Mott and Lynch said they also create “promotional tie-in,” limited-run popcorns. There was a Frozen flavor last year, and they plan a Batman v Superman: Dawn of Justice mix in March to coincide with the movie release. Seasonal and sports-themed flavors are popular, too. They said their winter-only peppermint popcorn is the fastest-selling recipe in the shop’s short history.

Kernels & Kandies popcorn is popped and prepared in-house. Caramel is made from scratch; cheeses are melted, not powdered; and chocolates are premium, wax-free Asher’s and Marich varieties.

Mott and Lynch arrive at the shop three hours before it opens each day and make fresh popcorn. Customers often hear about their shop by word-of-mouth, they said, and visit from Lawton, Enid and Edmond.