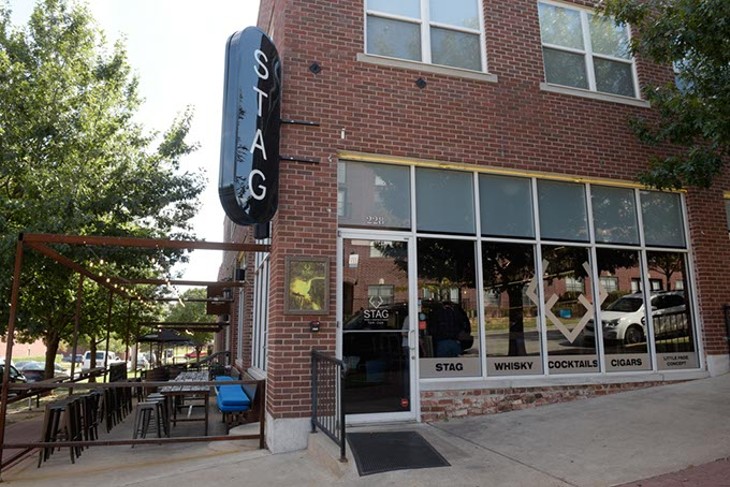 A little over a year since Deep Deuce’s WSKY Lounge eliminated smoking, much to the chagrin of Oklahoma City area cigar aficionados, cigars returned at the beginning of September when the high-end bar rebranded as Stag Lounge.

A month since re-opening at its 228 NE Second St. location, Stag Lounge is seeing the benefits of bringing cigars back, which was a staple before the April 2016 overhaul.

“The cigars have been a smash,” said Alton Wright, executive chef and general manager for Stag Lounge and Slaughter’s Hall.  “We’ve noticed sales going up and a lot of people, about half, are either bringing their own or buy a cigar.”

As part of the revamp from WSKY to Stag Lounge, ownership installed five air purifiers to combat the onslaught of cigar smoke and added to an already impressive collection of whiskey.

Stag Lounge is the only bar in the world to have a flight of Glenmorangie Pride (1974, 1978 and 1981), thanks to co-owner Dwayne Poor, who Wright said is one of the top whiskey collectors in the world. A bottle of 1974 Glenmorangie Pride sells for over $7,000 at online retailer Master of Malt. A tasting costs considerably less at Stag Lounge, which has over 300 selections of whiskey on premises.

“We wanted the concept of shareable plates,” Wright said. “We want to be an upscale whiskey bar with nice food to accompany it. The crab artichoke dip and tostadas have been very popular. Everyone can help himself or herself to plate. It’s like a heavier amuse bouche.”

Stag Lounge serves more alcohol than just whiskey, but it is the focus. Bar manager David Hodges said new seasonal drink menus will be finalized next week. It will include five classic whiskey cocktails, five versions of an Old Fashioned and five seasonal cocktails that will change quarterly.

The commitment to whiskey comes as it is increasing in popularity in the country. Domestic whiskey sales overtook vodka in 2014 and have continued to increase its market share, according  to Quartz.

Hodges said Stag Lounge harkens back to a time when America dominated the cocktail industry.

“Before Prohibition, America was the height of the cocktail world,” Hodges said. “American bartenders were being sent overseas to run bars. They disappeared or went underground during Prohibition. In 2010, it started coming back to craft cocktails. Distillers have been designing better quality spirits to keep up with the demand for these quality experiences.”