Many associate the beauty of stained glass with churches and cathedrals, but the art form dates back to ancient Egyptians. However, local artist James Rogers King’s interest took shape in the 1990s.

“My mom and I were checking out a craft mall she was thinking of renting a booth in,” King said. “One of [them] sold stained glass, and I thought it was too cool to pass up. The following week, I purchased some supplies and a book.”

The first technique King taught himself, the copper foil method, “uses a copper tape that is wrapped around each piece of glass,” he said. The pieces are then soldered together.

Later that year, he took a part-time job in a local shop and learned the leaded method to create larger projects, where lead strips are “cut to size and placed between each piece of glass,” King explained, and then the joints are soldered afterward.

King has always enjoyed hands-on projects, and he has tried just about everything, from sewing and woodworking to rebuilding classic cars before learning from artists at Oklahoma City-based Glasshaus Design Studio.

“When I got a part-time job at Glasshaus Studio, Lyn [Holmes], the owner, taught me a lot more … like painting on glass and fusing,” he said. “It would be years later that I would again teach myself some glass painting and fusing with books and an old ceramic kiln I bought.”

“My favorite project is a folding screen I made years ago of a Frank Lloyd Wright design,” he said. “I took a woodworking class just so I could make the frame myself.”

He has been working to finish expanding his shop to give metro area stained glass and ceramics artists a space where they can work. King also started teaching classes in the stained glass medium. The small workshops are limited to six people, and the next one is noon-4 p.m. July 22 at his studio, where guests will learn basic glasscutting, foiling and soldering in a project they can then take home with them. Materials and tools are provided.

“Even with all the tips and techniques in books, some techniques are easier learned by watching,” he said. “Also, having someone there with experience is nice to have.” 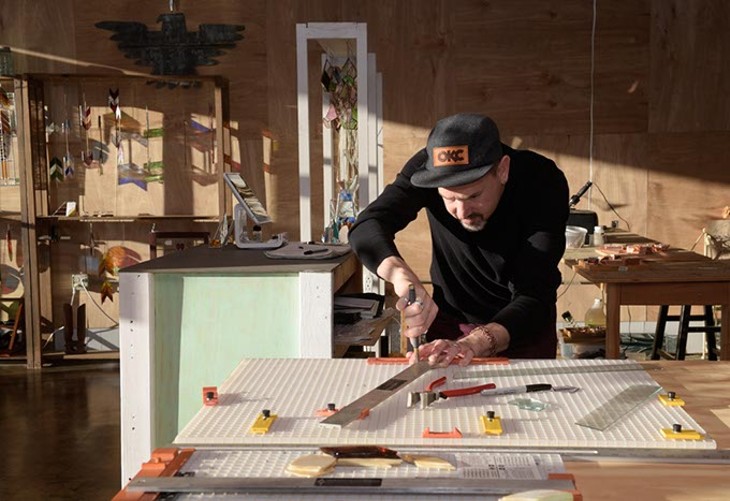 While working, King takes precautions to reduce his exposure to lead, such as using a tabletop high-efficiency particulate air (HEPA) filter in front of his soldering station and wearing a respirator.

He said that his custom order prices vary depending on square footage and project difficulty. Smaller items such as the suncatchers begin around $20, and premade art like six-inch decorative glass arrows and small terrariums are $10-$30.