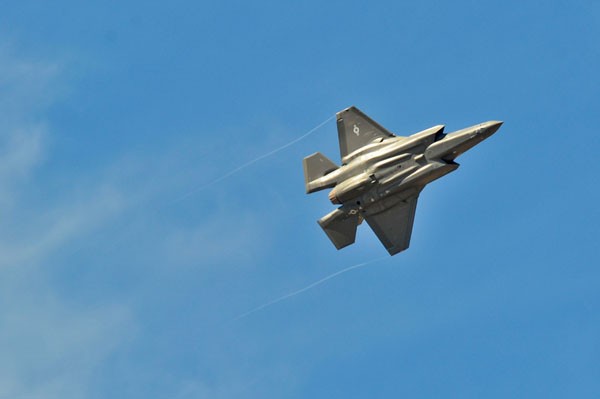 Visitors to this year’s Star Spangled Salute Air Show in Midwest City will be treated to the aerial acrobatics of some of the world’s finest stealth jets and historic aircraft as they revel in several historic milestones.

Aerial demonstrations are 11 a.m.-4 p.m. both days and feature Thunderbird and F-35 jet performances, along with World War II and Vietnam War reenactments with historic fighters and bombers.

The event honors both Tinker and the Midwest City community. The two have been entwined from the beginning.

Oklahoma businessman, builder and newspaperman W.P. “Bill” Atkinson founded Midwest City in 1942 after hearing about plans for a large military base within 10 miles of downtown Oklahoma City. Atkinson purchased thousands of acres around the proposed site and began planning what he hoped would one day turn into a model American city.

The founder always had an interest in supporting the military base, said Cindy Mikeman, Atkinson’s granddaughter and Rose State College executive director of foundation and resource development, during a recent Oklahoma Gazette interview.

“Everything he did from the very beginning was to support Tinker and the military presence in Central Oklahoma,” she said.

The 75-year anniversary has been a special time for Mikeman and the Atkinson family. For years, they have watched as Rose State College became a respected institution and as areas within Midwest City have seen significant economic growth.

“For my family, it has been an incredible journey,” she said. “We’ve been able to watch history unfold with a front row seat to the incredible growth of a community.”

Mikeman said Midwest City was built around families. The community combines big-city amenities with a friendly, small-town ethos. Everyone seems to know everyone.

“Neighbors are friendly, and the parks are packed with kids still on the swings, playing,” she said. “It’s a diverse population with a sense of honor for each other and for the men and women who support us on the homefront. It’s not uncommon to hear an airplane flying low, and while visitors might think that’s loud, residents of Midwest City will tell you that’s the sound of freedom.”

Every Sunday afternoon, the founding Atkinsons invited the community to their home and let children ride their Shetland ponies or pick flowers from their garden to replant in theirs.

Mikeman knows her grandfather would be proud of where the city is today.

“My granddaddy would be so thrilled to see it,” she said, “his vision for what it could be now a reality.”