Are you tired of superhero movies yet? The number of costumed crusaders per film grows like the housing bubble waiting for audiences to finally revolt and ask “Who are all these folks, anyway?”

Somehow, the X-Men films, those centered on a team of superhuman mutants, always suffer the most from this sort of fatigue. They’re always saddled with the campiest approach, the most heroes and the sloppiest creative forces.

It’s a shame, because these films attract talented actors playing big, fun roles — remember when we didn’t immediately think “Wolverine” when we saw Hugh Jackman? Apocalypse falls into the same pattern, only worse. The biggest downside is that it spends so much time trying to be serious.

We’re introduced to the world with some legitimately fun and oddball revisionist mythology in Egypt as a purple-skinned mutant and his apostles inside a pyramid attempt to transfer his consciousness into the strapping young body of Oscar Isaac. Things, of course, go wrong, and we flash forward to the next logical step in this timeline, the 1980s.

Newly minted demigod Apocalypse (Isaac, all his talent buried beneath makeup and fourth-rate dialogue) begins shaking up the world, but only after we painstakingly meet each and every new mutant in the universe.

Professor X (James McAvoy, quite good), Magneto (Michael Fassbender, slumming), and the telekinetic Jean Grey (Sophie Turner, charismatic) hold the film together far longer than it deserves. Teenage Nightcrawler, who looks like an emo demon, is a shining German gem played by Kodi Smit-McPhee, though he is often relegated to an accented punchline.

But these actors manage to take the drivel they’re given, an introductory hour of exposition and dialogue written with a lower reading level than the ’90s cartoon series and still dig up something fun.

Yet somehow, we are thrust into the perspective of the least fun character, the young Cyclops (Tye Sheridan). Even in a movie with a purple villain and a cast chock full of mutants, we’re saddled with a personality-deficient white guy. 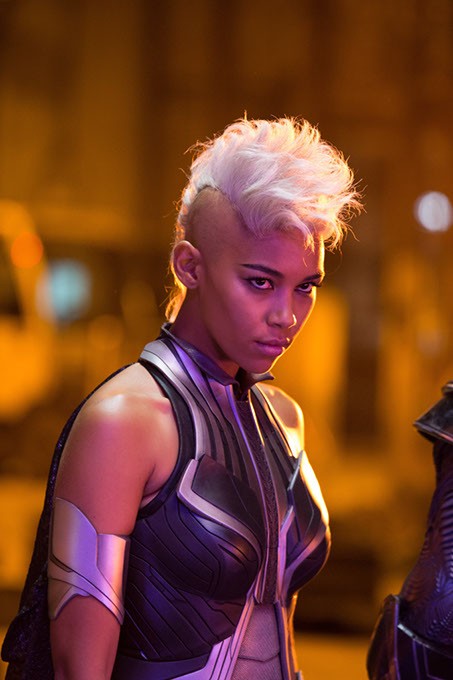 The X-Men have tons of great female characters, and the advertising has promised us Storm, Mystique, Psylocke and more. Instead, we get a visibly bored Jennifer Lawrence as Mystique; Olivia Munn standing around, grimacing in latex like she’d broken loose from a Power Rangers movie; and various other inept representations. Storm, the character we’re most familiar with and who has the most potential, is relegated to being a mohawk prop that the narrative actually intends us to forget about.

Director Bryan Singer seems like he listened to the reception of his last entry in the series, X-Men: Days of Future Past, as blithely and briefly as he could. You enjoyed that movie’s slowed-down scene for speedster Quicksilver to strut his stuff? Well, that’s extended to a 10-minute enterprise, dragging on until we’re worried that the film will never be in regular time again and we’ll be stuck in the theater until our hair is as gray as Quicksilver’s.

The other lesson Singer seems to have taken away was about violence, including that toward obviously doomed new characters. Superhero movies, like sitcoms, operate on cycles of introduction, tension and status quo resumption.

This is not meant to spoil, but to recognize. Pains are taken to remind us that death and violence are inherent in this universe, which is momentarily refreshing from the often clinical kung fu movie violence we often see in superhero fare (a few punches and they spin away facedown on the pavement, bloodlessly out of commission).

Realistic death still fails to register when the narrative comes packaged like a snippet caught between Saturday morning cereal sips.