As a boy, a Bob Dylan poster held a prominent place in Steve Ripley’s Glencoe room. Back then, Ripley, who grew up to become a noted musician, producer, engineer and founding member of double platinum-selling country rock band The Tractors, never imagined that he’d tour alongside America’s most revered living songwriter and perform with him in front of 20,000 people. Yet there’s a sense that it was all meant to be.

Ripley, a Tulsa legend in his own right, was the natural choice to help honor Dylan musically after George Kaiser Family Foundation and the University of Tulsa announced they recently acquired the Bob Dylan Archive, which includes 6,000 items from the artist’s music career that spans almost six decades.

Ripley leads an all-star lineup in On a Night Like This, an official Dylan tribute show celebrating The Bob Dylan Archive and paying respect to the iconic musician’s deep, celebrated catalogue. Thirty artists, including John Fullbright, Jimmy LaFave, J.D. McPherson, John Moreland and The Red Dirt Rangers, will perform many of Dylan’s greatest hits 8 p.m. May 20 at historic Cain’s Ballroom, 423 N. Main St., in Tulsa.

Ripley stopped short of saying he and Dylan are pals, but they are familiar with each other. The guitarist spent a year touring and playing with Dylan on Dylan’s Shot of Love tour in the early ’80s. They have run into each other a few times,  and those instances were always cordial.

One of those run-ins occurred after a concert at Tulsa’s Brady Theater. The two caught each other up on their lives and families before Dylan imparted an unexpected nugget of wisdom.

“He just kind of looked off and said, ‘You know, we’re just out here, serving these songs,’” Ripley recalled. “It was a little uncharacteristic of him, and it stuck with me. That’s the M.O. here, to let [his] songs stand on their own.”

The decision to house Dylan’s personal archive at the University of Tulsa surprised some. In a prepared statement, the Minnesota native and resident of California said his love for Oklahoma-born folk icon Woody Guthrie was an important factor.

“I’m glad that my archives, which have been collected all these years, have finally found a home and are to be included with the works of Woody Guthrie and especially alongside all the valuable artifacts from the Native American Nations,” Dylan said in the statement. “To me, it makes a lot of sense and it’s a great honor.”

When Ripley first heard the news, he did not believe it. He recalls Dylan mentioning in the ’80s the massive amount of stuff — handwritten manuscripts, notebooks, photographs, instruments, unreleased recordings — he saved through the years.

The first thing Dylan spoke to Ripley about was his relationships with Oklahoma musicians and friends Leon Russell and J.J. Cale.

“I call him Oklahoma Bob,” he said. “He does love Oklahoma. Whether that was a little or a lot or none of the influence, I have no idea. But I don’t think it hurt.”

Organizers started laying the groundwork for On a Night Like This before the archive news was made public.

Ripley was contacted by Tulsa’s Woody Guthrie Center and George Kaiser Family Foundation officials about The Bob Dylan Archive while the news was still a secret. Together, they worked on the On a Night Like This event. The Tractors founder lives on a farm outside of Tulsa and has lowered his public profile in recent years, but he could not turn down an opportunity to organize an event like this.

“I usually say no to all of that stuff, not because of any reason, just simply because I don’t do that anymore,” Ripley said. “I haven’t played a gig in quite a while.”

John Fullbright reminisced about the dark, curly haired silhouette on the blue cover of Bob Dylan’s Greatest Hits, the most coveted album in his mother’s record collection.

“It’s kind of what lit the fire for me to get into songwriting in a large way,” he said. “I played that record nonstop and learned a handful of songs.” 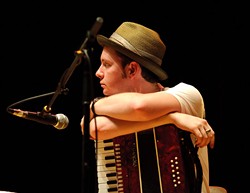 Fullbright, who released his most recent album, Songs, in 2014, grew up just outside of Okemah, Woody Guthrie’s birthplace. In addition to playing his own solo Dylan tribute, Fullbright also will be a contributing member of Ripley’s house band.

Fullbright didn’t hesitate when Ripley asked him to participate. Hearing Ripley speak passionately about Dylan and the event made the decision an easy one.

“It’s his creative genius that’s kind of putting everything together,” Fullbright said. “I’m just along for the ride and the really cool experience that will come from it.”

Fans can expect more than just live versions of Dylan’s greatest hits. Fullbright said there will be a surprise visual component to the show. He also added that all the performers have their own histories and bonds with Dylan’s music. There will be no shortage of passion in Cain’s Ballroom that night.

The biggest challenge Ripley encountered while putting the show together was finding a way to pare down Dylan’s massive body of work into a single, defining tribute.

“I’ve always said in art it’s what you leave out, not what you put in, but this runs contrary to that because leaving out some key songs — you just can’t play them all,” he said. “We whittled and whittled, and it’s still too many and I’m still whittling today.”

In a music year that has seen the deaths of icons like David Bowie, Merle Haggard and Prince, Ripley said he’s glad they’re taking the time to appreciate a legend like Dylan while he’s alive and healthy.

“It’s an important thing, but not to be dwelled on because of impending doom,” he said, “but to give weight to the stature of a few of these people in the cosmos and the universe I think we’re extremely lucky to be among.”