Science Museum Oklahoma upgrades its planetarium to provide a better experience for audiences. 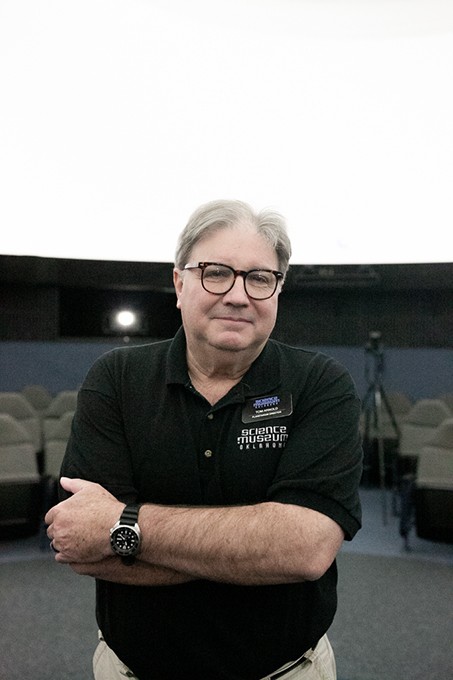 Thanks to an anonymous donor, the stars in the sky are shining brighter at Science Museum Oklahoma’s (SMO) Kirkpatrick Planetarium. The planetarium, which closed to the public on Aug. 6, will reopen with upgraded technology and equipment on Saturday. Before the recent renovations, the museum had been using the same equipment, manufactured by the Minolta camera corporation, since 1978.

“At the time, it was certainly cutting-edge technology,” said planetarium director Tom Arnold, “and even now, the sky was still halfway decent, but it was getting old. The stars were dimming. The planets didn’t work anymore. Literally, it had one foot in the grave and the other on a banana peel, so we had to do something.”

The operating system previously used to control the planetarium’s lights and slide projectors was an antique installed in the early 1990s.

“We had to retrofit people’s knowledge back to DOS in order to be able to handle the application that we were having to babysit every day,” Arnold said.

When new information about the cosmos was discovered, Arnold and his staff still attempted to incorporate the latest knowledge into the planetarium’s presentations, but the process was difficult and time-consuming and the results were limited by the old equipment.

“We tried to keep up with the technology in terms of what we were learning in outer space,” Arnold said. “We kept updating the slides, but they were slides and that’s pretty much it.”

Clint Stone, vice president of programs at the museum, said the planetarium staff’s efforts gave visitors an enjoyable educational experience but the new renovations will allow them to provide a more interactive and impressive show.

“It was pretty common to come in to the planetarium to see Tom and crew working on things, keeping things going and changing out slides very often on all the projectors,” Stone said. “What Tom and we’ve been able to do through this planetarium is to give everyone who comes here a great experience, a wonderful live show. And we were able to do that with the Konica Minolta and the system that we had in place with the slide projectors, but what we’re able to do now is take that a step forward. … We listened to what our guests wanted, what we’ve heard back and spent a long time looking at possibilities and what we thought would fit our guests’ needs most but give us opportunities to grow as well and challenge ourselves in new ways.”

The biggest challenge the planetarium faced once the decision had been made to upgrade the equipment, Arnold said, was determining which system to install.

“We wanted to make sure that we had something that was really cutting-edge today,” Arnold said, “because when you buy technology of any kind, whether it be a computer or anything else, you buy the best that you can at any given point in time because in a few years, it’s going to be obsolete. That’s the philosophy that I used when I started first looking for these things, to try to find the best technology that would be the most expandable over time. Digital is certainly going to be expandable. It’s going to be around from now on. So that was a key factor in the decision-making process.”

The other major challenge, Stone said, was planning a major renovation without keeping the planetarium out of service for any longer than necessary.

“From the small things like redoing our console to the big things of removing the star ball and preparing a lot of the conduit, air conditioning, wall painting, floors, there was a lot of work that needed to be done,” Stone said. “So we worked backwards from when we wanted to open to when we needed to start preparing and tried to minimize the amount of time we would be closed to our guests. We have 70,000 folks who come through every year to see a star show, and we don’t want to let anyone down. And by doing this, we’ll be able to make everyone’s experience even better.”

The new system, an Evans & Sutherland Digistar 6, features Sony high-resolution digital projectors controlled by 12 computers. By upgrading to digital graphics, Arnold said the planetarium shows can now include “literally anything [he] can dream up.”

“Anything you would see in any science-fiction movie, any fantasy movie, we can do that same kind of thing here,” Arnold said.

Stone said the new system will allow the planetarium to create its own customized shows specially designed for audiences in Oklahoma.

“Our guests love seeing a night sky that’s not only specific to our area and what they’ll be seeing that evening, but our stories and our own culture that we’ve developed here as a museum, so we’re continuing that,” Stone said. “They will see new things, they will see stories about their own sky, they will have an enhanced experience from what we were offering two months ago.”

Updating the system and equipment will allow the planetarium to offer up to seven shows per day where it could previously offer three or four. In addition to pre-recorded programs, visitors will be able to choose from a variety of different options for customized shows.

“One thing we like to do is to ask the audience, ‘Where would you like to go? What would you like to see?’” Stone said. “So if the audience wants to visit Mars — maybe there’s been a lot of news about Mars that day — we can travel to Mars and not only see Mars but see Mars as it is at that time and address questions. … If they have interest in the rovers, we could do something with the rovers as well. Pluto is very popular. Kids always want to go to Pluto, and we can take them. Things that guests may have heard about in the news, we’ll be able to shift the show and focus on those things.”

The old equipment, including the outmoded star-ball projector, has been removed from the planetarium, but Stone said the museum will still retain it because of its historic value and it might eventually end up in its own exhibit.

“It’s been with us 40 years, since the planetarium was in this space in 1978,” Stone said. “We have plans for growth in the future and sharing that with our guests in some kind of context, possibly a historical context … so it’s being well taken care of right now.”