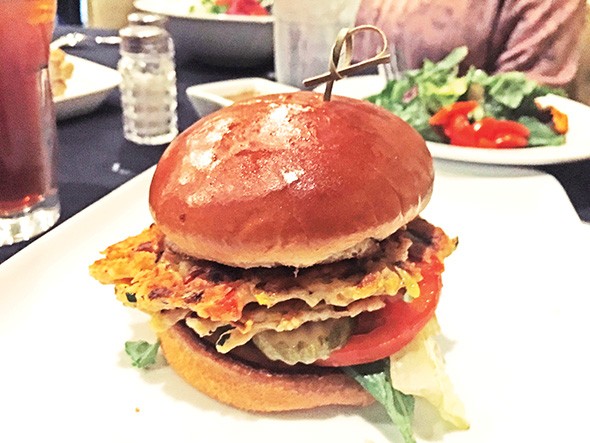 What works: The chicken-fried steak is tender, and the shrimp and grits are creamy.
What needs work: The pork belly needs more caramelizing.
Tip:The unique veggie burger patty is also offered on Ned’s Benedict.

Even though the interior looks like a snapshot of a lounge from the late 1960s, Ned’s Starlite Lounge opened at 7301 N. May Ave. in the second half of 2018.

The gold flocked wallpaper and bathroom tile are from the 1960s while the restaurant’s barstools and high-walled gold booths are reproductions from the era. You might think you had stepped into a time portal if you did not look at a menu or notice that no one is smoking indoors.

The concept is the brainchild of Ned Shadid Sr., an institution of Oklahoma cooking, having operated the successful Ned’s Catering for decades and served as past president of Oklahoma Restaurant Association.

Outside of wanting to attract a larger lunch and brunch crowd, Shadid is more than pleased with the reception of Ned’s Starlite Lounge in its first eight months of operation.

“People love the vibe, the cocktails and people rave about the food,” Shadid said. “The only thing we might hear is that the portions are too big, but that’s the kind of complaint that we like to hear.”

Starlite’s chicken-fried steak comes with traditional white gravy or smoky Poblano gravy with either fries or mashed potatoes, and it is huge. It is not quite as big as Kendall’s Restaurant or Jimmy’s Round-Up Cafe and Fried Pies, but it is every bit as tasty. Starlite pounds the steak tender, and it retains its tenderness after a crispy deep fry. In a city known for serving some great chicken-fried steak, Shadid’s version is up there with some of the best.

I attended a family-style meal at Starlite Lounge a few weeks ago and got a chance to sample most of its weekend brunch menu. My favorite bite was its shrimp and grits. An entrée portion features 12 jumbo shrimp with four-cheese grits so smooth and creamy that you might not even realize they are grits. It is all topped with a roasted honey habanero reduction that is equal parts sweet and spicy.

Instead of using English muffins as a base for Benedicts, Starlite Lounge substitutes a split yeast roll that is browned on the flattop. Country Chic places a pork sausage patty on the roll with a poached egg and a garlic tomato reduction that is a nice twist on the regular hollandaise sauce.

The rolls make another appearance on Ned’s breakfast sandwich, served open-faced in the case of the loaded option, which was my least favorite item on the brunch menu only because of the inclusion of pork belly with eggs, bacon, sausage and country gravy. The pork belly was not caramelized enough and was like chewing warm gristle.

“We try to caramelize our pork belly,” Shadid said. “So many people serve it with too much fat on there. We let it render the fat off. It’s something you either love or you don’t love. Of course, if I get a big, fatty piece, I’m not much of a fan either.”

Pork belly, which is the part of the pig that yields bacon, started to become more ubiquitous on menus in the last 10 years as the country’s bacon obsession hit a second gear. I love bacon, but can we all just admit that it can be overkill sometimes? Give me carnitas crisped on the flattop over pork belly.

It should be noted that the national bacon craze did not happen organically. Following the trend to reduce fat intake in the 1980s and 1990s, leaner cuts of pork like tenderloin became more en vogue (Remember the campaign “Pork: The Other White Meat?”), leaving the fatty belly to be thrown away.

Pork lobbyists targeted fast-food franchises to add bacon to their menus, even subsidizing recipe development, according to Bloomberg Businessweek, and beginning with the rollout of Hardee’s Frisco Burger in 1992, set us on the craze that led to bacon-themed restaurants.

Beyond the pork belly misstep, Starlite Lounge is really firing on all cylinders. Its half-pound beef burgers are caramelized and served medium. The top-selling burger is the Nomad, which pays homage to the space’s former occupant, Nomad II, with its fried pepperoni that was a menu staple.

It uses a similar formula to make steaks on its chophouse feature, as they are cooked in a skillet for even caramelizing.

Ned’s makes an excellent burger, but on a recent dinner trip, I ordered the veggie burger because I needed a lighter option after a lot of heavy eating and was pleasantly surprised by Starlite’s unique preparation. It uses a hummus base for the veggie patty and adds red bell pepper and zucchini before it is put on the flattop to crisp. I was surprised when Shadid told me the kitchen staff does not batter it because that is what it tastes like.

You can get the veggie patty substituted on the veggie version of the Benedict at brunch, as well.

Shadid said Ned’s is rolling out new menu additions at the beginning of June, which include some new pastas like a beef stroganoff made with tenderloin that has been a popular special feature as well as a few lighter items.

“I could be here for 15 hours per day,” Shadid said. “Being in the catering business is a wonderful thing. You get to see clients and occasionally talk to them, but here, you’ll get the same people who come in all the time and you really get to know them. I didn’t realize how bad I missed the restaurant business.”