Oklahoma is host to the world’s largest outdoor Furry convention, Oklacon, this weekend. 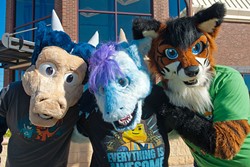 Fall means a lull in activities, cooler weather, pumpkin-carving and Halloween parties. For other people, it means six-foot-tall foxes, wolves and dragons converging on one of Oklahoma’s state parks.

This isn’t your typical Halloween costume party. In fact, it has nothing to do with Halloween at all. Oklahoma is host to the world’s largest outdoor Furry convention, Oklacon. The convention has been held each year at Roman Nose State Park, just outside Watonga, since 2003.

According to BlueOtter, one of the founders and current organizers of Oklacon (who only wanted his furry pseudonym — or fursona — used), “Furries are fantasy animal characters that have human characteristics and can vary in definition from realistic werewolves to cartoons like Garfield.”

He added that people within the Furry community and those who attend Oklacon share common interests in anthropomorphism, or animals taking on human characteristics, but the level of interest can differ from person to person.

From those who just like to create Furry-related artwork and stories to those who don fursuits, he said there’s a wide variety of different people that the event brings in.

A common misconception is that Furries wear costumes and all desire to actually be the animal they portray. BlueOtter said that while this might be accurate for some of those who come to Oklacon, it is not necessarily representative of all of those who attend the event.

He said that Oklahoma has long had a large Furry community and what started as small gatherings would later lead to the beginnings of Oklacon. He added that the early 2000s were the start for many of the Furry conventions that take place around the country and draw in thousands of visitors each year.

When planning a convention for Oklahoma, he envisioned a different experience than those found in a crowded convention center.

“Walking into a 5,000-person convention can be daunting and disappointing if you’re trying to connect with a lot of other Furries you know primarily from online who are also doing the same,” he said.

Among the key aspects of the convention, apart from the scheduled daily events, are the contributions made to charities over the years. Oklacon has partnered with WildCare Foundation of Noble this year. The foundation takes in injured animals, rehabilitates them and releases them back into the wild, including federally protected species such as golden and bald eagles.

Oklacon 2014 runs Thursday- Sunday. For more information on scheduled events and everything else Oklacon, visit oklacon.com.