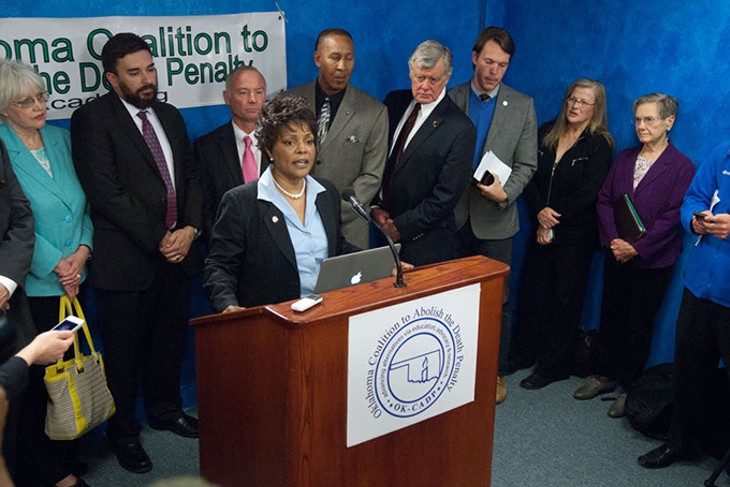 When former state Sen. Connie Johnson began speaking out against State Question 776, she knew she would encounter death penalty advocates.

And that’s exactly what happened in mid-August when Johnson spoke to a group gathered at Langston University.

“There was one prominent gentleman in the audience who said he was for the death penalty,” Johnson said.

The three-time elected state senator emphasized that the November ballot question doesn’t ask Oklahoma voters to support or oppose the death penalty. This is a repeated message of the Say No to SQ 776 Campaign, of which Johnson is chairwoman.

“Whether you are for or against the death penalty, this is not what the state question asks,” Johnson said. “It is about putting it in the state constitution or not.”

If passed by voters, State Question 776 — a legislative referendum — would change the state constitution to allow the Legislature to determine methods of execution not expressly outlawed by the Eighth Amendment of the United States Constitution. Among other details, it would declare the death penalty — “as distinguished from a method of execution” — shall not be considered cruel or unusual punishment, the bill summary states.

The constitutional amendment would situate capital punishment within the Oklahoma Constitution’s Bill of Rights, which enumerates the rights of all Oklahoma citizens.

During her decade in office, Johnson was known for repeatedly sponsoring anti-death-penalty bills. Since her retirement, Johnson has persisted, serving as a member of the Oklahoma Coalition to Abolish the Death Penalty.

She said she believes that the state question is a waste of time, especially following the 2015 passage of House Bill 1879. That legislation affirmed that executions would continue even if Oklahoma’s lethal injection policy were deemed unconstitutional or during a lethal injection drug shortage.

Johnson warned of what she calls a hidden agenda behind the state question, which will be the first question on the seven-question general election ballot Nov. 8. According to Johnson, the measure attempts to place the state’s execution process beyond judicial review, removing the checks and balances system provided by the judiciary. If affirmed, she said the measure would almost certainly face costly litigation and legal challenges, with taxpayers footing the bill.

A large, double-paned window allows visitors of the Oklahoma State Penitentiary in McAlester to view the execution chambers where the condemned speak their last words and inhale their final breaths. A silence has befallen the chambers in the 20 months since the state’s last execution, when Charles Frederick Warner uttered, “My body is on fire,” as life-ending drugs were administered to him on Jan. 15, 2015.

Between 1915 and 2014, the state has killed 191 men and three women at Oklahoma State Penitentiary. Records show that one person was hanged, 82 were executed and the rest died by lethal injection.

Until its 2015 moratorium, Oklahoma had the highest number of executions per capita in the country, according to Washington D.C. nonprofit Death Penalty Information Center.

A report released earlier this year by an Oklahoma multicounty grand jury into the executions of Warner and Clayton Lockett and the scheduled execution of Richard Eugene Glossip found the state’s execution protocol was “vague,” “poorly drafted” and “woefully inadequate.” They also reported negligence resulting in an unapproved drug being used in the procedures and an “inexcusable failure to act on the part of a few individuals,” among other things.

As the state further reviews execution polices and procedures, executions are on hold due to a moratorium, which began in October.

The 2015 legislation called for ennobling the death penalty within the state Constitution. Additionally, the amendment provides for the change of execution methods, such as firing squads and electrocution, and that the death penalty was not cruel and unusual. The measure cleared both houses and is slated for the Nov. 8 ballot as State Question 776.

Sykes, an attorney, stated in April 2015 that the legislation would preserve capital punishment for the worst criminals.

Sykes, a Moore Republican, did not answer an Oklahoma Gazette request for comment.

If voters approve SQ 776, the Sooner State would join four other states with death penalty measures inscribed into their constitutions, said Abraham Bonowitz, a longtime opponent of capital punishment who has helped repeal death penalty legislation in a handful of states.

“This is the first time a state has proposed adding it to the constitution in a way that is just a waste of time,” said Bonowitz, a campaign strategy and tactics consultant and former director of affiliate support for the National Coalition to Abolish the Death Penalty.

More than four decades after California voters wrote the death penalty into their state’s constitution, voters in that state will have the opportunity to repeal the measure in November.

“I think the most important thing people need to understand about SQ 776 is it is an attempt to subvert the traditional checks and balances of the three branches of government,” Bonowitz said.

Lawmakers cannot circumvent judicial review of their laws in the view of the federal Constitution.

Unlike many other state questions dealing with criminal justice reform, farming rights and education, SQ 776 has failed to garner a strong interest among voters. Media coverage includes only a handful of reports online.

That troubles death penalty opponent Rev. Don Heath, who has worked three years with Oklahoma Coalition to Abolish the Death Penalty. The vice-chairman worries that voters will arrive at the polls unaware of the state question and its implications.

“The ballot wording does a poor job of explaining it,” Heath said.

Heath hopes voters realize the issue at stake is a constitutional amendment, specifically to the Bill of Rights.

Earlier this month, the Say No to SQ 776 Campaign launched as volunteers canvassed critical Oklahoma City and Tulsa neighborhoods. Voters are receptive to the message of the campaign, Johnson said. She has engaged in conversations with people on both sides of the political spectrum as well as for or against the death penalty.

“Once you share the message with people, they get it,” Johnson said. “Without fail, they agree to vote no. They know it is not right to put the death penalty in the state’s constitution.”

Print headline: Bill of Rights, State Question 776 has little to do with whether or not voters support the death penalty and everything to do with the state Constitution.