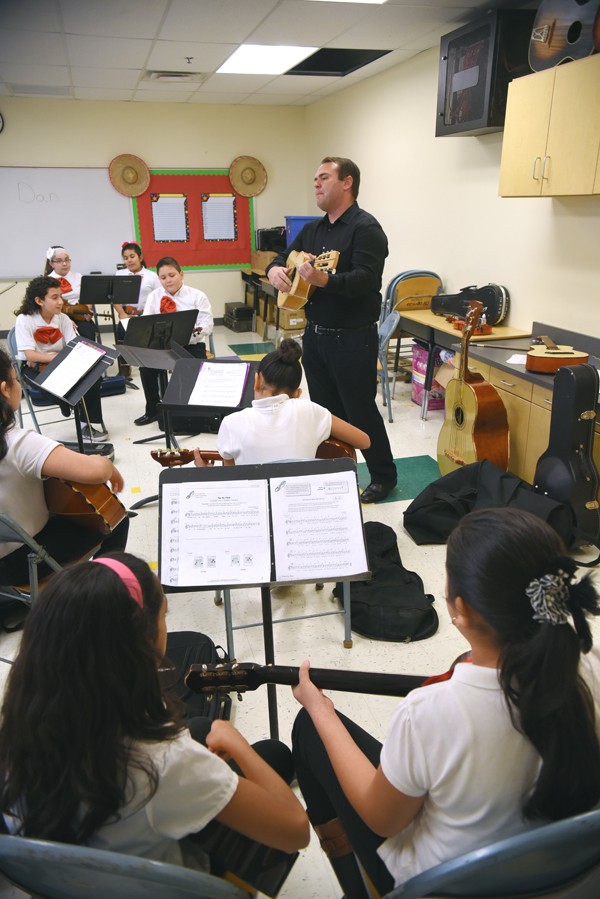 Down the hall, another handful of students wrapped colorful streamers around cardboard rolls. Students shook them and heard the sound of their newly created rain sticks, small percussion instruments.

The activities were just a sample of February’s Celebrate the Arts, an event hosted by the Cleveland Elementary Parent-Teacher Association (PTA) and a highlight of the year for students and parents alike.

“Our families are very focused on the arts in their children’s lives,” explained Falisha Melott, Cleveland PTA president and mother of a Cleveland student.

In addition to offering music and visual art programs, the school invites arts groups like Oklahoma Children’s Theatre to campus for special events.

“All of the parents at Cleveland believe art is a fundamental part of our children’s education,” Melott said. “The children wouldn’t be able to achieve as much as they do without having access to these arts programs and activities.”

Parent-teacher associations, commonly referred to by their initials, are well-known for supporting their local schools. Such groups build strong working relationships among teachers, parents and school leaders.

Cleveland PTA, along with other PTAs in the Oklahoma City Public Schools (OKCPS) district, see their roles shifting, as the state’s largest school district expects to operate with $30 million less in the 2016-17 school year. In the wake of state budget cuts, OKCPS recently announced 208 classroom teacher and 92 administrative layoffs.

In the weeks following, parents learned of elementary fine arts teachers who wouldn’t return for the coming school year. The Cleveland PTA was told its school stands to lose music and visual arts teachers.

In late April, Melott penned a letter to parents and community members asking for help to raise $45,000 to fund Cleveland’s visual arts program. Days later, the PTA created a GoFundMe page. Community donations could be a solution to saving arts in their school.

District leaders are formulating guidelines and procedures for groups that wish to raise funds to support specific programs that were cut after rounds of budget cuts. Associate Superintendent Aurora Lora first previewed such plans during the April 4 Oklahoma City Board of Education meeting.

Fifteen days later, Lora gave more details on her district equity fund proposal, which she plans to present to the school board for a vote.

“Unfortunately, not all schools would have the ability to [raise funds],” Lora said. “Every school has dire needs and things they would love to put back into their schools. … We want to make sure every school is getting what they need.”

District officials have not disclosed the exact classroom positions and schools affected by the cuts. Following the district’s typical attrition process, which includes retirements, relocations and resignations, the specific impact to each school and positions eliminated will be determined, said Mark Myers, district spokesman. The effects of attrition will be finalized Sunday.

During the 2014-15 school year, 266 visual and performing arts programs were offered and 15 elementary schools participated in the Oklahoma A+ Schools arts integration program.

A 2012 study by the National Endowment for the Arts found that students who have access to arts in or out of school tend to have better academic results, better workforce opportunities and more civic engagement. More specifically, low-income students who receive high school arts education were more likely to complete a high school calculus course than those without exposure to the arts.

Many educators contend fine arts education — including music, theater, dance, drawing, painting or sculpture — is part of a well-rounded curriculum. Fine arts courses provide students with a creative outlet, increasing their self-confidence and building teamwork skills and self-discipline. Additionally, they provide youths opportunities to engage outside of school with performance and art shows in their community.

“Arts education is another avenue for learning which helps to grow the gifts of kids in our schools,” said Julia Kirt, executive director of Oklahomans for the Arts, an arts advocacy organization.

Various community arts groups, Kirt said, approached her about possible OKCPS arts education cuts. As a Cleveland parent, Kirt was only familiar with what she heard from her children’s school. She started a Facebook group, OKCPS Parents & Supporters Concerned About Arts Education, and an online petition for supporting arts in all Oklahoma schools.

“I thought, ‘If this is happening at Cleveland, where one-third to one-half of the arts is getting cut, what’s happening at other schools?’” Kirt said when asked what prompted her to create the page.

“If this is happening districtwide, it will change arts education for thousands of kids,” Kirt said, “and arts educators will be out of work.”

Typically, community arts organizations are asked to fill the void left when fine arts programs are eliminated. Given the state’s financial crisis, those organizations also are experiencing funding hits.

“Now, [community arts groups] are going to be called on to do more in the midst of cuts from private and public donors,” Kirt said.

With the state facing a budget shortfall in excess of $1.3 billion for the coming year, dire cuts to public education were prompted by early numbers from the Capitol. OKCPS joins other districts in discussions and actions on staff reductions, program elimination and calendar changes.

“The impact on all students will be less one-on-one time with teachers,” Hime said. “This budget crisis is proof that we need to bring everyone together to work on long-term solutions for public schools.”

As a parent and school advocate, Melott called it heartbreaking to strip arts from Cleveland students and other schools in the district and state.

“We think all Oklahoma City children should have arts programs in their schools,” Melott said. “Hopefully, in the future, that will be the focus of our school system.”