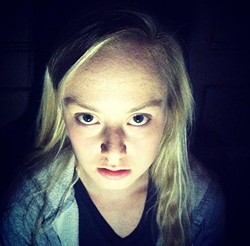 There are those who must have been at least a little trepidatious about the idea of Stephen King’s first novel being made into a musical. There must have been jokes comparing it to Silence of the Lambs the musical, those imagining Hellraiser with dance numbers.

The story of a teenage girl with an incredible psychic power and a domineering and hyper-religious mother getting her ultimate revenge is not exactly the kind of material that Rogers and Hammerstein would have been chomping at the bit to adapt.

However, while on the surface the book is about these subjects, it’s an allegorical cautionary tale. When you take this into account, it becomes clear why Lawrence D. Cohen would want to adapt into a musical.

The Weitzenhoffer School of Musical Theatre and University Theatre (both at the University of Oklahoma, OU) are collaborating to bring the show to Norman.

“The world is finally ready to be receptive to this cautionary tale of the dangers of insensitivity and ambivalence,” director Jonathan Beck Reed said.

With the universal idea that all people essentially want love and acceptance for who and what they are, this is a story that could be ripped from today’s headlines.

This role is a challenging departure for her, as she most often plays more comedic, lighthearted roles. She did a lot of homework to pin down Margaret, who is one of the more nasty antagonists in theater. Ross’ challenge was finding some way to relate to her and make the audience sympathize with her cruel treatment of her daughter, or at least her motivation.

“My role is tricky,” she said. “You learn that in theater — villains are most often not villains in their minds. I had to focus on her not as a villain.”

She instead sought out stories about mothers who have done horrible things out of religious insanity. Andrea Yates, a young mother from Houston, heard voices in her head that told her to kill her children. In 2001, she did.

“I went through a process of ... finding ways to justify making her a real person, making someone that mothers can relate to,” Ross said.

It was harrowing work. Early in the process, Ross described “just going numb” in order to get through the grueling emotions that Margaret goes through.

“I’ve only ever played super, super goofy roles — over-the-top, so happy about life, so emotional,” she said. “[But with] this show, that’s what makes this a musical, too. The space is so intimate, and everything is real and relatable.”

Thankfully, the cast had each other for support.

Reed, who more often takes his place on the stage rather than behind it, made every effort to cast the play based on chemistry between the actors.

“He gave us a lot of freedom in how we approach our characters and how we built the story,” Ross said.

She also stressed how helpful it was to have the books on hand, as the musical pulls more from the book version than the 1976 film directed by Brian De Palma. The film, with Sissy Spacek in the iconic role of Carrie and Piper Laurie as the hateful Margaret, has almost no emotional subtlety, especially between the mother and daughter. There is also very little in the way of metaphor.

The musical is much more about the themes in the book.

While King gets criticism for generally writing about the boogeyman, he’s more often writing about spiritual struggle or how humans can be the ultimate boogeyman with no help from the spirit world.

For her take on the tortured and lonely Carrie, Audra Bryant struggled with getting into her role as well, but for completely different reasons. She was really afraid of taking on this iconic role and making it hokey or over- the-top, so she approached it from a different angle.

“I started with reading the book, and I really tried to understand I’m playing a real person, and while there are crazy circumstances, just like in real life, there are different sides to her that they may not show all the time because they’re nervous and scared. But she’s funny and compassionate and smart. I really tried to look at her like I would a friend,” Bryant said.

“To be honest, we always joke that every musical is about love, but it really is the story of a girl who is struggling to find a source of love and compassion from somebody, who it should come from ... for some reason, she can’t find it. To put it simply, that’s all [this story] is.”

Note: This play is rated R, and there is heavy gore.