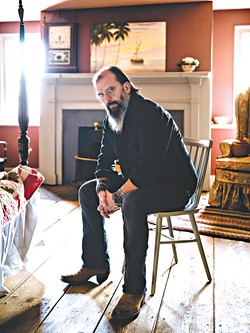 For many, the year-end holidays are a time to wind down and reflect on the past 12 months. Steve Earle is no different, and what a year it has been for him.

The outlaw country guitarist and simultaneously gritty and sweet lyrical songsmith has spent most of his time touring the world with his recently revived band The Dukes, which debuted at Willie Nelson’s Fourth of July Picnic this summer in Austin, Texas.

The band put out the album So You Wannabe an Outlaw in June. It is Earle’s return to country music after polished forays into blues, as heard on the 2015 album Terraplane, and folk on his collaborative record with Grammy-winning Americana singer-songwriter Shawn Colvin.

Since the release of the new album, Steve Earle and the Dukes has been touring nearly nonstop. Before a recent phone interview with Oklahoma Gazette, Earle said his sleep schedule was still adjusting after returning from a run of shows in Australia just a week prior.

Earle, who turns 63 next month, said his holiday plans include spending a few days with his mother in Nashville before flying out to Hawaii with his 7-year-old son John Henry (whom he had with his former wife singer-songwriter Allison Moorer) for Christmas. He said the trip has become like a holiday tradition for him in the last few years. Though his primary focus is recreation, he is scheduled to perform a solo set Dec. 29 in Maui.

So You Wannabe an Outlaw has been hailed as Earle closely channeling the upbeat country-rock sound of his early career and his breakout 1986 album Guitar Town.

Earle said there were a variety of reasons he felt like it was time to return to his vintage sound, but chief among them might be the self-reflection that often comes with experience and loss.

“When you get older,” he said, “you kind of get back to looking at where you’ve come from, to some degree.” 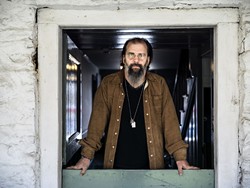 Though at the time he was taking a break from recording country albums, Earle was commissioned to write a few country songs for the drama series Nashville. He said that process helped put him back in the country frame of mind.

He was further pushed in that direction after completing a long tour for the 30th anniversary of Guitar Town last year and relistening to some of his favorite work by friend Waylon Jennings.

“Waylon was always a really big deal to me,” Earle said. “He’s been very supportive of me. [The album] is me unapologetically channeling Waylon Jennings to the best of my ability for most of the record.”

The front half of the album is particularly loaded with rough-and-tumble throwbacks. The opening title track is enhanced with an appearance by Willie Nelson, who shows he is still capable of delivering great bandit bravado.

One of the more rollicking tunes is “The Firebreak Line,” which Earle said he wrote as a tribute to the rural laborers who painstakingly chop through forests to prevent the spread of wildfires.

“A lot of times, they’re risking their lives to save a rich-ass old house that shouldn’t have been built there in the first place,” he said.

But the other half of the album features more reflective songwriting. “This Is How It Ends” is a breakup duet with Miranda Lambert. Both have experienced high-profile divorces. Lambert divorced Ada-born country star Blake Shelton in 2015.

“Goodbye Michelangelo” is a tribute to country and folk legend Guy Clark, who died in May 2016. Earle said Clark was a mentor and near-father figure to him when he moved to Nashville. Earle met Clark through his existing friendship with Townes Van Zandt. For a while, Earle played bass in Clark’s band and on his 1975 album Old No. 1.

“He seemed venerable even when he was 33 or 34 when I met him,” Earle said. “It’s kind of weird; I was looking at all of these pictures at [photographer] Jim McGuire’s studio at the wake, and that’s what shocked me was how young he looked, because I don’t ever remember him being young.”

There were many lessons young Earle learned from Clark, including the mechanics of song structure and performing. But the most important lesson was not a technical one.

“The main thing,” Earle said, “was that songs aren’t finished until you play them for people.”

Earle is known for being socially and politically outspoken, so it might be surprising to some that So You Wannabe an Outlaw is not more overtly political, given the relentless news cycle the country has been subject to for the past several months.

The songwriter, a supporter of Vermont Sen. Bernie Sanders in the 2016 presidential election, said most of the album’s songs were completed well before the election results came in.

But don’t expect Earle to stay silent on the topic. He is already working on his next album with the Dukes.

“The next record will be just as country as this one, just as electric as this one,” he said, “but way more political.”

Whatever record Earle comes up with is likely to make more of a conscious statement than the majority of today’s “mainstream” country often themed around sex and alcohol. In a recent interview with The Guardian, Earle said a lot of radio country is essentially “hip-hop for people who are afraid of black people.”

Earle told Gazette that his comment did not mean that he has any interest in defining what country music should or can be.

“I don’t need country music to be one thing,” he said. “I’m not like that. They finally found a youth audience they have been looking for for years, and that’s how they did it.”

Even when technically leaving country for other genres — be it rock, blues or folk — Earle’s music has always felt like it kept loyal to some degree of country truism. It is a quality that might be more intrinsic than intentional for the Southern troubadour.

Print headline: Duking it out, Steve Earle and the Dukes wrap up 2017 with a show at Tower Theatre.

Steve Earle and the Dukes with The Mastersons