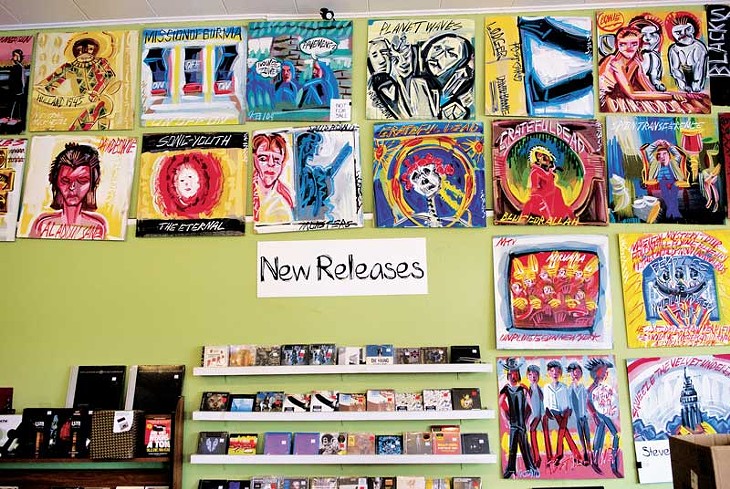 If you wander into Guestroom Records in either Oklahoma City or Norman and aren’t too focused on the jaw-dropping amount of vinyl on display, you’ll notice a particular artist takes up a lot of space on the walls. Steve Keene’s vibrant paintings are frenetic renderings of beloved records, from Nirvana’s MTV Unplugged in New York to Mission of Burma’s ONoffON. They are, without a doubt, one of the store’s best-selling items, with hundreds of his paintings sold to local music and art fans.

Justin Sowers, one of Guestroom’s owners, said stumbling upon the New York artist was happenstance.

“We ran into a lot of them on eBay,” Sowers said, “a bunch of his little bitty ones that were selling super cheap, and we bought them all and sold them all.”

Part of Keene’s charm is that his works are painted by hand yet still affordable, selling for $25 each. After Guestroom’s owners saw how quickly the first collection sold nearly eight years ago, its management got in touch with Keene and began ordering from him directly.

“We haven’t gotten a lot of his [paintings] this year,” Sowers said. “It’ll be kind of a flurry of them and then nothing for a while.”

Keene’s art is part personal creativity and part fan art, loving tributes to some of the biggest and smallest artists of today and yesterday. If a glance at the wall at Guestroom is any indication, Keene is a big David Bowie fan. He’s also partial to The Velvet Underground, The Beatles and Sonic Youth.

“You would go to record stores or book stores and you would see fanzines where they talked about their favorite band or their favorite record or something like that, and I tried to mimic that,” Keene said. “My paintings are dirt cheap, and they’re treated as something that you could pick up and take them anywhere and drop them off.”

“I have been doing art for 20 years, and it started in the music community,” he said. “I would do my paintings and then I would bring them to bars or shows, and it was kind of amazing to get my work all over the country. A band would buy my pieces and then give them to friends hundreds of miles away. I really didn’t know how efficient it would be.”

Keene can knock out a dozen or more paintings in a day. And while it gives them a somewhat manufactured appeal, there’s no hint of mass production. Each painting is unique, varying in some way from those before it and those after it.

There’s a manic excitement in the making of his pieces, which shows through in the finished works. They are colorful and a little messy, yet they capture the spirit of the bands he admires.

Keene has never been to Oklahoma, but he is not convinced of New York’s superiority when it comes to art or lifestyle.

“Most places are just as cool as New York — especially now,” he said. “I’d like to come to Oklahoma someday. It seems like a cool place. I mean, they buy lots of my art.”