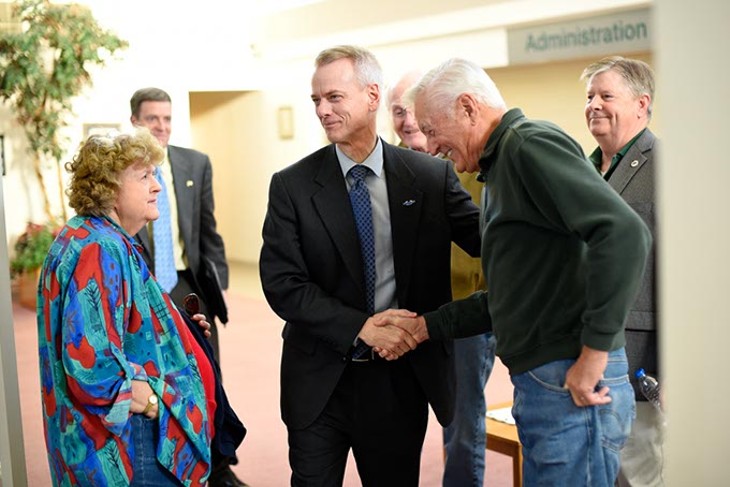 Days after the Nov. 13 Paris terror attacks, an Oklahoma freshman congressman delivered a heartfelt speech on the U.S. House floor. He called the American Security Against Foreign Enemies (SAFE) Act of 2015 “xenophobic” and a “kneejerk” reaction to the tragic events in Europe.

“America is a lamp that lights the horizon of civilized and free mankind,” Rep. Steve Russell, R-Choctaw, said in the Nov. 19 speech. “The Statue of Liberty cannot have a stiff arm. Her arm must continue to keep the torch burning brightly.”

Russell’s four-minute speech caught the attention of his Republican Party colleagues who were pushing for the bill’s passage. The SAFE Act called for adding extra security procedures to restrict admission of Iraqi and Syrian refugees into the country. Shortly before the Nov. 20 vote, Russell agreed to exchange his vote for a seat at the table. Months later, the act failed in the U.S. Senate.

During a town hall with constituents in The Village, Russell detailed what he learned at the table where decisions are made about the government’s policy toward refugees. When he began his U.S. Congress career representing Oklahoma’s 5th District in January 2015, the U.S. Army veteran brought with him his knowledge of military operations, veterans’ affairs and refugee encounters.

Fourteen months into his term, Russell now holds unique insight and context from a trip to the Middle East, where he visited refugee camps on the Syrian border. He said the refugee resettlement process is solid.

“I got out and saw those places,” Russell explained to a crowd gathered March 8 at The Village municipal building. “Why? Because I learned as a solider if you want the ground truth, it’s closest to the ground.”

As a combat veteran, Russell has witnessed Middle East conflicts and refugee resettlements firsthand. He said he believes in honoring the international treaties that call for protecting war victims and enacting refugee resettlement programs but agrees with proper refugee vetting protocols. His trip, which included stops in Syria, Lebanon and Turkey, confirmed his belief.

At a Turkey refugee camp, Russell heard about a toddler named Kauthar who was critically injured when a barrel bomb struck her northern Syrian home. A Galveston, Texas, hospital offered Kauthar lifesaving treatment, but she and her mother faced obstacles obtaining travel visas. Russell intervened and asked the U.S. Consulate in Turkey to allow them to leave the country. Last month, Kauthar underwent surgery at Galveston’s Shriners Hospital for Children.

“I looked at the 18-month-old girl who was burned by a barrel bomb. It burned her eyelids off and burned her body severely,” Russell said. “There is a difference between people trying to attack us and little girls.”

To Russell, the visa waiver program poses a greater terrorist threat than refugee admission. He backed Rep. Candice Miller’s, R-Michigan, measure to reform and tighten the rules with 38 countries whose citizens can visit the U.S. without U.S. visas. The Visa Waiver Program Improvement and Terrorist Travel Prevention Act of 2015 also calls for restricting travel of those who visited Syria or Iraq. Russell was one of 407 U.S. House members who voted in favor of the bill, which was first proposed in September. The bill, which passed in December, moved to the U.S. Senate, where no vote has been called.

“That was our biggest, most single vulnerability, and that’s what we focused on,” Russell said.

Before the Syrian Civil War and the Syrian refugee crisis, Russell had concerns about the country’s immigration policy. He supported a bill from Rep. Michael McCaul, R-Texas, calling for spending an additional $10 billion for border security. The Border Security Results Act of 2013 supported adding more border agents and new technology to track people who enter the country illegally.

The bill never made it to a vote, despite its large collection of cosponsors.

Russell said securing the border is the first step toward any type of immigration reform legislation. He said both parties are ready to tackle reform, but it’s unlikely under President Barack Obama’s watch.

“Here is the problem: We have an unsecured border,” he said. “How do you heal a wound when you are not going to stop the bleeding? You aren’t going to stop it. Right now, we want to come up with some immigration policy before we fix our border. You can’t do that.”

Russell said building a fence or a wall, like Republican presidential candidate Donald Trump suggests, is not the answer.

“The problem with a fence is they will go through it,” he said. “It makes sense to have it in certain places where you can watch over it and protect it. As an infantryman, you know what obstacles are? Something to bypass.”