Hamilton: An American Musical lives up to the hype at Civic Center Music Hall. 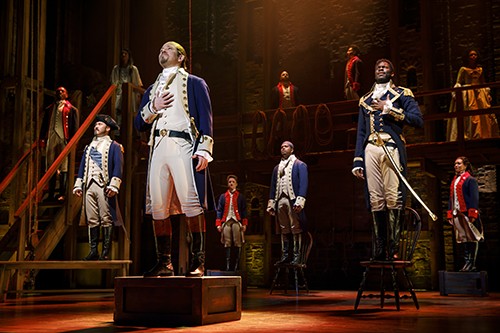 Hamilton fever is still going strong years after the popular musical’s Broadway premiere.
This was evident in the multitudes of Oklahoma City fans who came to the touring production of the show July 31 at Civic Center Music Hall’s Thelma Gaylord Performing Arts Theatre, 201 N. Walker Ave.

Eager groups waited their turns in front of a Hamilton-themed step-and-repeat, where a volunteer was gamely snapping their photographs. This was just across the lobby from the merchandise table, which had lines too thick to traverse. Inside the theater, more fans posted pictures of their playbill, their views and their faces.

I came to this whole phenomenon a little late—by about four years, I guess. I missed the tour that came through Los Angeles and never even tried for tickets the last time I visited New York in 2017.

But I was well aware of the show’s popularity when it exploded on the scene in 2015. I even had a girlfriend who, through most of 2016, dropped everything to move to New York City and study the real letters sent between Angelica Church and Elizabeth Hamilton (Alexander Hamilton’s supposed unrequited love and his wife, respectively).
So I settled into my seat at least sort of familiar with the show and the fervent love it inspires in fans. I also already knew its premise as a hip-hop/rap telling of Hamilton’s life, written by Lin-Manuel Miranda from an extensive biography by Ron Chernow. I just didn’t know how good it would really be.

When the 10-minute call rang, the woman sitting next to me asked if I had seen the show before.

She introduced herself as Patricia Burket. She said this Oklahoma City performance was her eighth time at Hamilton.

The surprise must have shown on my face because she laughed and said the fact was a little embarrassing but then explained that her son Austin Burket has served as first-chair violin and concertmaster in the show’s orchestra for the past year and a half.
Although the show is too popular for cast and crew to get complimentary tickets, she said, she still enjoys joining her son for some legs of the tour and getting in when she can. She was hopeful I’d like it.

Simply put, everything you’ve probably already heard is accurate. The music and orchestration are incredible. The scenic design by David Korins is impressive, utilizing two turntables within the stage floor that result in gorgeous movement and staging.
Every element in the show works together with stunning precision. It has to because from the very beginning, the narrative takes off like a train. For nearly three hours, the cast is constantly in motion, rapping and singing lyrics that are spectacular in their sheer complexity and sense of humor. Lighting, music and choreography merge in ways that are frequently surprising.

It would be impossible to carry off this feat without capable performers. Joseph Morales as Hamilton imbues the role with a youthful exuberance, which contrasts with the silky confidence of Nik Walker as political rival Aaron Burr. Erin Clemons provided some of the show’s most emotional moments as Eliza Hamilton. And of course scene-stealing King George (played by Jon Patrick Walker) was a big hit.

It’s easy to see why Hamilton continues to delight audiences. It takes the stage musical to a new and exciting place, provides a space for performers of color to shine and imparts timely messages, even in a story about America’s founders.

And you probably do need about eight viewings to catch it all.