The idea to open a restaurant with your sisters might be a difficult scenario for some families to imagine, but at Stone Sisters Pizza Bar, sisters Sheli Reynolds, Tami Lake and Traci Stone have a bit of friendly competition.

“What pizza did you order?” Lake asks a customer after he takes a seat in the restaurant located at 2124 N. Broadway Ave. in the former Borden Dairy building.

“She only wants to know because her pizza sells the best,” Reynolds chimes in.

Lake’s pizza, Misunderstood Middle Sister, features smoked Lovera Caciocovera cheese, sausage, pepperoni, olives, onions and red peppers. All of the ingredients are organic, but what sets Stone Sisters Pizza Bar apart is what they refer to as a “miracle crust” made from the ancient grain spelt.

“We’re the only place in the world that we know of that serves the sprouted spelt crust,” Reynolds said. “When you sprout something like a grain, it turns it from a bread carbohydrate to a vegetable carbohydrate.”

The darkest time of Reynolds’ life led to the light of a career focused on healthy living.

Her husband Joe died in 2011 following a six-year battle with brain cancer. The desperate attempt to find a cure led Reynolds, a former pharmaceutical salesperson, to explore the opposite end of the spectrum: holistic medicine and clean eating.

Following his death, Reynolds needed an outlet and went full-bore into benefits of food, becoming a certified nutritionist.

“When you have something happen like that, I just needed a new focus,” Reynolds said.

Reynolds enlisted Lake to start the business Healthy Journey, which helped clients convert their kitchen pantries and provided healthy cooking demonstrations. During once such demo, the sisters showcased three traditionally unhealthy meals with healthy recipes, one of which was pizza. 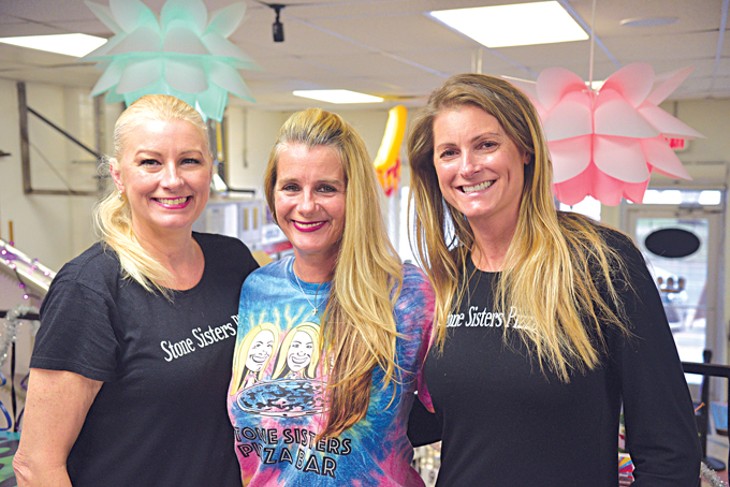 The pizza featured the spelt crust designed by Reynolds and an organic sauce developed by Lake. Their clients encouraged the sisters to pursue a restaurant for pizza.

They resisted until they were put in contact with Jim O’Steen, the owner of the old Borden building, who had purchased pizza ovens and wanted to convert the building’s original ice cream shop.

It seemed as if the universe was telling them to take a leap, so they brought in their older sister Stone to help run the business and hired chef Cally Johnson to take their ideas into a fully formed menu. Johnson co-founded Big Truck Tacos, where she is still part owner, but she’s in the sparkling-white pizza kitchen most days.

“She made our ideas blossom, and she knows how to build a pizza so that each flavor comes through,” Stone said.

The menu features pizza piled high with organic meats like grass-fed beef, pasture-raised chicken and pork and three vegan pizzas. Customers can also choose their own ingredients and watch it be built right in front of the entrance, thus making it a pizza “bar.” They can choose either the sprouted spelt or an organic unbleached white crust.

Reynolds said she developed the spelt crust to help combat her own gluten insensitivity, which she said affects more than 86,000 people in Oklahoma City. The crust is classified as gluten-friendly instead of completely gluten-free.

“Ninety-nine percent of people with gluten insensitivity are only allergic to the processed version,” she said.

The specialty pizzas are a nod to friends and family, just like most of the restaurant. There are pictures of the sisters’ mother from a 1960s movie filmed in Oklahoma. There is what they refer to as the “angel table” that features pictures of all of those who helped them along the way, including Reynolds’ late husband Joe.

The Front Yard Rumble (With a Side of Hair Pulling), a vegetarian pizza, refers to a real-life fight between sisters. There is also the Thanks Gramps, a barbecue chicken pizza with organic barbecue sauce, chicken, smoked cheese, red onions and banana peppers. It’s topped post-bake with a coleslaw of purple cabbage, green apple and cilantro.

“It’s named that because our grandfather walked around with a bottle of barbecue sauce at all times,” Lake said.

The menu also includes soups, salads and desserts, a few of which are vegan-friendly. Refrigerated cases house enchiladas and lasagna made from the sprouted spelt flour. Taps pour wine, beer and hard cider, and PepsiCo installed a Stubborn brand soda machine that features sodas without artificial ingredients in flavors such as orange hibiscus and black cherry with tarragon.

Since Stone Sisters opened in May, they negotiated lower prices with suppliers for cheese and sprouted spelt, which has enabled them to lower menu prices.

“A lot of people can’t afford organic, and we want to have a product that everybody can afford, not just rich people,” Stone said.

Reynolds said they are trying to increase takeout and catering to make up for what is a low-foot-traffic area. A new area of marketing the sisters are entering is frozen pizza.

“My end goal was to never have a restaurant; it was to distribute, and this is just a way to get our name and brand out,” Reynolds said. “The restaurant isn’t big enough for us.”