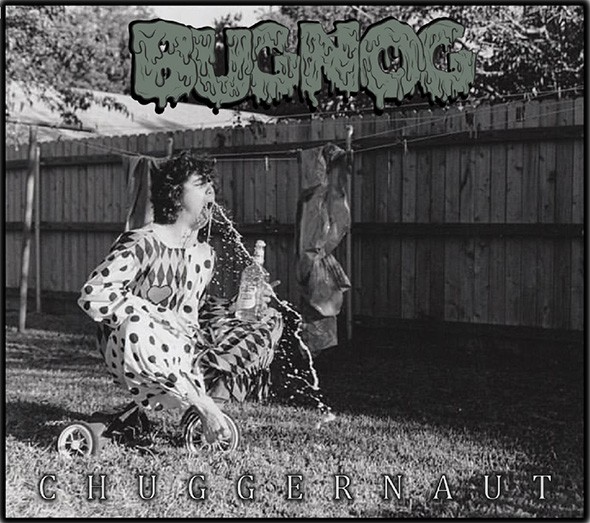 Bugnog celebrates the release of debut album Chuggernaut 9 p.m. March 14 at Blue Note Lounge, 2408 N. Robinson Ave. At the time of this interview, the “two-dude” Norman metal band was still finishing it.

“In past projects, we’ve had outside help,” guitarist Nog said, “and it just never came out the way we wanted it to come out, so this outing, we decided total DIY, total do-it-by-yourself, and that way we can get the sound that we’ve been, kind of, I guess maybe chasing for this project.”

The album is “a long time coming” collaboration that began a little over a year ago.

“We always joked about … ‘We need to get together and form this doom band and just play really heavy, trudgy, slow stuff,’” drummer Bug said. “We always laughed, and then both of us got freed up, and we were like, ‘You know what? Let’s just do this thing.’”

Nog said he’s influenced by “typical doom metal bands” Sleep and Black Sabbath as well as The Mars Volta and jazz bassist Charles Mingus, while Bug listens to deathcore, black metal and childhood favorites such as Metallica and Megadeth. Vinnie Paul’s “big drum sound” in Pantera is a “huge influence” as well, but the duo doesn’t necessarily want to sound like any of those things.

“We were trying to not try to emulate bands that we liked too much,” Nog said. “While we were in this band, for me at least, a lot of times I’ve been trying to listen to not metal stuff.”

Bug and Nog, who have played together in other bands under other names, have “kind of a love-and-hate relationship sometimes,” Nog said, but the two have an easy time communicating.

“I would say it’s our ability to compromise, our ability to straight up look each other in the face and say, ‘Dude, that sucks,’ or ‘Dude, that’s boring,’ or, ‘This is just not going to work together,’” Nog said. “I think it’s just this ability to not get butt-hurt about the other’s input.”

Though their abilities to play each other’s instruments are limited, they both accept suggestions.

“We’re both willing to try something, to take direction,” Bug said. “That way, we can both hear it and be satisfied that we heard the idea.”

“I wanted to have like a bell type of thing at the beginning of one of our songs, ‘Inquisitor,’” Bug said, “and he deemed it to sound to much like a messenger app dinging.”

“Bug is a sucker for explosions,” Nog said. “There might be less explosions on the album than he wants, but — ”

“I’ve got a couple buried in there,” Bug said. “I try to keep them hidden and don’t tell him what I’m up to, but I know they’re there. They’re buried enough to where nobody can hear them. I don’t even know if I can hear them, but it makes me feel good.”

Bugnog, according to the band’s bio, is both a metal duo and “a delicious and intoxicating drink made from booze, bud and bugs.” If anyone has a recipe, Nog offered to taste it at the album release show.

“If people want to bring out some bugnog, their own homemade bugnog concoction for us to test to see if it’s up to our standards,” Nog said, “they’re more than welcome to.”

“We have our own version, which is not to be disclosed,” Bug said.