This documentary chronicles a proto-punk band in the 1970s that formed to rebel against Detroit’s slick Motown crooning. 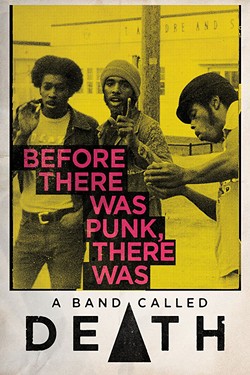 Directed by Jeff Howlett and Mark Covino, this documentary chronicles a proto-punk band in the 1970s that formed as a rebellion to Detroit’s slick Motown crooning.

Like just about any magical-thinking musician, guitarist David Hackney was sure his band was onto something. It was going to be huge.

His family-slash-bandmates weren’t so sure, but they decided to back him — and the macabre name.

But it wasn’t. The African-American band was booted from record companies time and again for their race (implied) and the band’s moniker, which it refused to change.

Flash forward to the late-aughts, when a kid listening to underground radio heard music like none other: revolutionary and punk and formidable. The agape listener was the son of Death member Bobby Hackney, and the young man recognized his family’s voice.

From that moment, Death is reborn.

Decades earlier, David Hackney had holed away all those early demos, sure that Death was a band bent for fame, eventually, and forced his reluctant brother, Bobby Sr., to take over the collection before his death from cancer in 2000.

Soon, Bobby Sr.’s own kids are playing Death’s music as the band Rough Francis, and a family also is born again.

It’s a story almost too authentic to be believable. If it was sold as fiction, it would be a loser Lifetime Network melodrama. But people, this is real.

Death was (and is) the future of true do-it-yourself, be you, fuck authority punk, before it even had a name.

Hear the Rough Francis record on Spotify, and buy the Death soundtrack at your local record store.