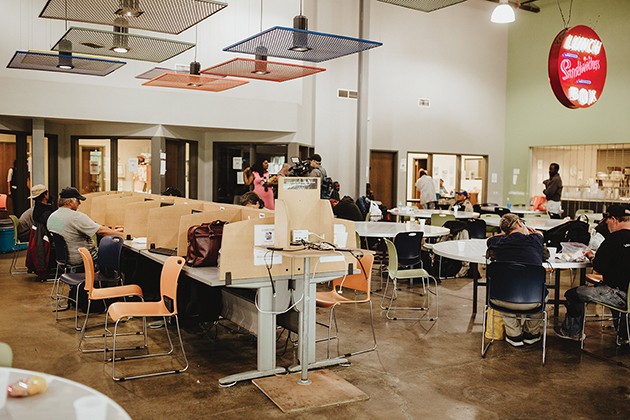 Oklahomans in a packed Tower Theatre got a detailed look at homelessness statistics in Oklahoma City. Speakers presented the results of the Point-in-Time count, and city leaders discussed how OKC could better address the issue at the State of Homelessness address June 4.

The Point-in-Time count is an annual one-day count of people experiencing homelessness in transitional housing, in emergency shelters or completely unsheltered. It provides a snapshot “not designed to be a complete analysis.”

“The reason we do it every year is because, with that kind of trend analysis, we can better track basically the areas that we’re having a lot of success in and the areas where we need to make some changes,” said Jerod Shadid, OKC’s homeless services program planner.

Shadid attributes this year’s slight increase to the fact that the count was on a cold night when shelters open up overflow beds to house more people, which made it easier to count people. Almost 60 percent of those counted this year were living in emergency shelter, with 12 percent in transitional housing and 30 percent completely unsheltered.

Along with the Point-in-Time count, organizations collaborate through other programs to share information on their clients, said Dan Straughan, Homeless Alliance executive director.

“One of them is the Homeless Management Information System. All that is is a giant networked computer database that allows agencies that serve people experiencing homelessness to share data on shared clients. The Homeless Alliance hosts that system,” he said. “It’s in broad use across the community today, and in fact, in 2018, the Oklahoma City Homeless Management Information System recorded 11,278 unique individuals receiving homeless services in our community.”

Another tool is the Vulnerability Index — Service Prioritization Decision Assistance Tool (VI-SPDAT), which OKC made the required assessment tool for any agency serving people experiencing homelessness. It is a prescreening tool with 27 questions that essentially assesses each person’s experience.

“You can put everybody that’s been assessed all on the same list and then work together as a community to get people in housing,” Straughan said.

The community has used the tool since 2017, and now there are over 4,000 VI-SPDATs in the system. To better understand the data, Homeless Alliance has partnered with quantitative analysts from Oklahoma City University. They are volunteering to analyze all the information using artificial intelligence.

The largest group had 674 individuals, most of whom said they had never been attacked, did not have legal issues, were not homeless because of a broken relationship and could take care of themselves. However, 100 percent of them said they had no planned activities that made them feel happy or fulfilled.

“They don’t have anything to do or look forward to; they’re saying that this is a huge driver for their homelessness,” he said. “So now that I’ve identified this group of 674 people, what can I do differently? … What services might suit them best? Is it housing? Or is it an engagement program, just getting them involved?”

Through their analysis, Bivens and Spencer are able to make recommendations to Homeless Alliance, and as more people come to homeless-serving organizations, they can be easily placed into one of the eight groups, allowing organizations to be much more proactive.

“We’re getting to the point where, once they actually have someone put in the system, we have something for them that immediately tells them what’s going on and makes recommendations,” Bivens told Gazette. “We do this as a volunteer thing, on our own time, but the university is letting us use their resources. … It’s definitely like a partnership between us, [Oklahoma City University] and the Homeless Alliance because we want to be community service leaders.”

The initial analyses are only step one in the partnership. Bivens and Spencer will continue to track the changes in people who take the VI-SPDAT multiple times. They will also begin to analyze how each group reacts to different services in order to make better recommendations.

“This is a really big deal because that 4,000 number is huge,” Bivens said. “We were talking to someone at United Way, and there are very few studies done — this is a really big sample size for statistics — in the U.S. that have that number. The closest to our study that we did is one in Australia, so it’s a huge thing.”

They said if there are other nonprofits that possess a “goldmine of information,” they can reach out for help.

One of the most successful methods to help people experiencing homelessness, Straughan said, is through the Housing First model. Unlike Housing Readiness, which gives people preconditions to meet before getting housed, Housing First provides housing immediately and gives people support services to address their needs. Housing First has been used by agencies in OKC since 2013; last year, more than 750 people were housed through this model.

“[People experiencing homelessness] use $9,500 worth of emergency services — that’s ER, that’s community crisis centers, police, fire, ambulances, hospitals,” he said. “For almost half — $5,500 — we can put a person in housing and provide the supportive services they need to sustain that housing and avoid those costs on the front end. It’s the smart way to do the right thing.”

Deborah Jenkins, Oklahoma Housing Finance Agency executive director, spoke about affordable housing. She said in 2015, a person would need to earn a little more than $14 an hour to afford a two-bedroom apartment in OKC.

A solution to the problem would be more access to what Straughan calls “truly affordable housing.”

Mayor David Holt also spoke at the event, saying that as a community, OKC has never been as invested in addressing homelessness. He discussed the prospect of addressing the issue in MAPS 4.

City Care will open a low-barrier, harm-reduction night shelter in December to serve 200 people per night.

Pivot started building tiny homes near its property for transition-age youth. Three will be completed this month with another three by the end of the summer.