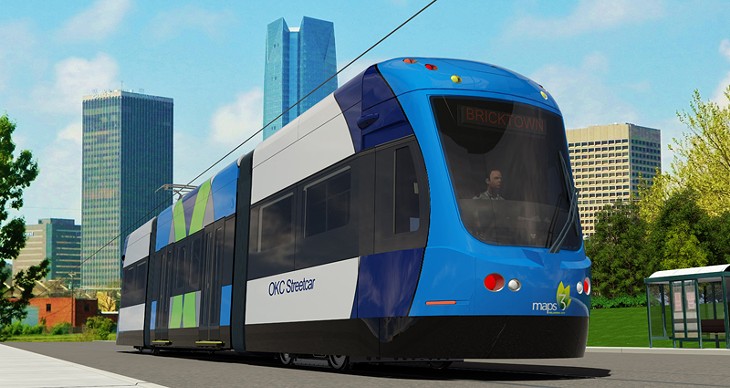 When it comes to modern streetcar projects, leaders should keep in mind streetcars provide a transit mode, but the effects are far-reaching for a city.

Jeff Bezdek, a MAPS 3 Streetcar subcommittee member, made that point when addressing the Oklahoma City Council Feb. 16. During the meeting, the nine-member council approved extending the original 4.5-mile rail route of the MAPS 3 Streetcar project. The modern transit project is one of nine distinct programs included in the 2009 sales tax initiative. So far, the project has earned $131 million of $777 million gathered to fund all eight projects.

With the route extension, streetcar riders will have two routes to select from, including one that specifically serves Bricktown, Myriad Botanical Gardens and two other MAPS 3 projects: the Downtown Public Park and new convention center. The 2.04-mile south streetcar line increased the modern transit budget by $3 million.

Supporters of the new route expressed a desire to see the streetcar service the new convention center and the potential convention center hotel. The Alliance for Economic Development of Oklahoma City is eyeing the corner of S. Robinson Avenue and SW Fourth Street for future placement of a hotel.

With the city investing $419 million between the new park and modern convention center, Bezdek argued it made sense to shift the streetcar lines south of the central business district. Over time, the streetcar will support and play a role in spurring economic growth.

“I think the one thing that is overlooked in our discussions about routes is the incredible economic return the streetcar system could potentially generate in terms of sales tax revenue for all of downtown,” Bezdek said. “You can look at nearly any city that has put in a modern streetcar system, and the ratio of return is $4 to $12 depending on urban land use principals married with the streetcar system.”

Bezdek already sees Oklahoma City reaping the benefits from the streetcar, which is projected to run in 2018. Development has begun along the streetcar line in Midtown and Automobile Alley.

The economic development argument for modern transit isn’t unwarranted. After Portland, Oregon, picked the spot for its $103-million, 4-mile streetcar line, the northwest city witnessed $3.5 billion worth of new construction within two blocks of the streetcar route.

A year before Tucson, Arizona’s streetcar began rolling along a 4-mile track, an economic development organization reported a $230 million construction boom for the city of more than 500,000 people. Additionally, around 150 businesses opened along the route during a five-year period.

Not everyone agrees on the streetcar project. Before the vote, Councilmember Pete White, representing Ward 4, expressed concerns over funding the streetcar’s operations and maintenance, which is estimated to cost $3 million annually. He questioned the fare cost and success of ridership. White voted against the route extension.

The conversation of a streetcar’s impact on the public is justified. Most American cities have experienced setbacks with getting streetcars running. Some cities, including Atlanta, Georgia, struggled to get riders onboard once service began. In the case of Atlanta, the streetcars carried 18 percent fewer riders than anticipated after the first six weeks of operations.

The MAPS 3 subcommittee consistently studies and discusses trouble experienced by other cities with implementing streetcars.

“Our subcommittee wants to bring the best proposal learning from all these different cities and to build a streetcar system that people will want to use,  meeting the expectations of the voters,” Bezdek said. “I don’t think we are there yet, but we are almost there.”

Print Headline: Route revision, The MAPS 3 Streetcar project heads south after the Oklahoma City Council approves a new route with a $3 million price tag. Advocates believe it is a smart move for riders and the city.