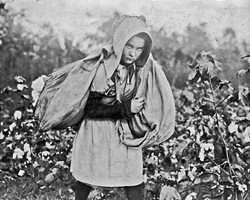 Currently on view at Oklahoma History Center, Child Labor in Oklahoma: The Photographs of Lewis Hine, 1916–1917, showcases the pioneering work of sociologist and photographer Lewis Hine. The exhibit, co-curated by Lori Oden and Jim Meeks of the center and Theresa Bragg, an adjunct professor of photography at St. Gregory’s University and Oklahoma City Community College (OCCC), brings together visually striking and thought-provoking images that provide valuable insights into the realities of life and work in early 20th-century Oklahoma.

The decision to build an exhibit around Hine’s Oklahoma photographs arose after Meeks came across one of Hine’s images while curating a 2015 exhibit of Farm Security Administration photos for the history center.

Shot in 1917, the image of an 11-year-old Oklahoma City bakery worker led Meeks to investigate Hine’s time in the state.

“There were just a ton of photos,” Meeks said. “I started looking through them, and it was like a flood of information.”

He reconnected with former OCCC colleague Bragg when she brought a group of photography students to see the FSA exhibit.

For its curators, the exhibit represents a valuable opportunity to educate viewers about Hine’s work and the fragments of local history his images reveal.

“Most people had no idea that Lewis Hine was here in Oklahoma, and it’s actually been really interesting to look back 100 years … to see where he was and what he was looking at,” Bragg said. “For the most part, these [images] have not been widely published.”

Born in Wisconsin in 1874, Hine worked as a photographer for the National Child Labor Committee (NCLC) from 1908 until the beginning of World War I. Traveling throughout the United States, he used his camera as a tool for social change, documenting the conditions of child workers in support of efforts to reform local and national labor laws.

While there, he produced portraits of school-aged children employed as cotton pickers, newsboys, factory workers, bakers and bicycle messengers.

Hine’s work as a photographer and social justice advocate proved instrumental in raising public awareness of child labor and other social problems, but he often struggled to find financial and institutional support for his projects.

He died in poverty and obscurity in 1940, leaving behind an artistic and political legacy that would be rediscovered and brought to light by subsequent generations of scholars and historians. 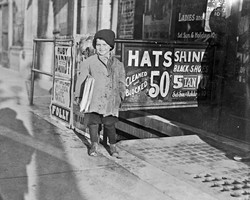 Exploring Hine’s body of work, Bragg, Meeks and Oden were struck not just by the powerful subject matter but also by the aesthetic qualities of the photographs themselves.

Hine cultivated relationships with each of the children he shot, gaining their trust and learning about their lives.

The bond between artist and subject can be felt in the direct, confident gazes of the youths.

“I think that’s what’s so powerful about some of the images that have become iconic,” Oden said. “They’re just looking right into your soul to communicate with you about what’s going on.”

Meeks highlighted Hine’s consistent use of shallow depth of field, a technique that allows individuals in the foreground to stand out in sharp relief against a soft-focused background.

By framing his young subjects in this way, Hine emphasized that the children — even more than the social and economic conditions that shaped their lives — were the true focus of his art.

In addition to showcasing the strength and diversity of Hine’s work, Child Labor in Oklahoma: The Photographs of Lewis Hine, 1916–1917, draws instructive parallels between past and present.

“A lot of the issues during Lewis Hine’s time are still issues now: immigration, worker’s rights, children’s rights,” Bragg said. “I personally think it’s a perfect match, and I’m thrilled with what we’ve picked out.”

The exhibit is on display through March in Chesapeake Events Center at Oklahoma History Center, 800 Nazih Zuhdi Drive. Admission is included with regular history center admission, which is free-$7 for individuals and $18 for a family of up to six people. Organizers suggest guests call ahead to make sure the events center is open to the public before they visit. 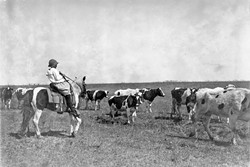