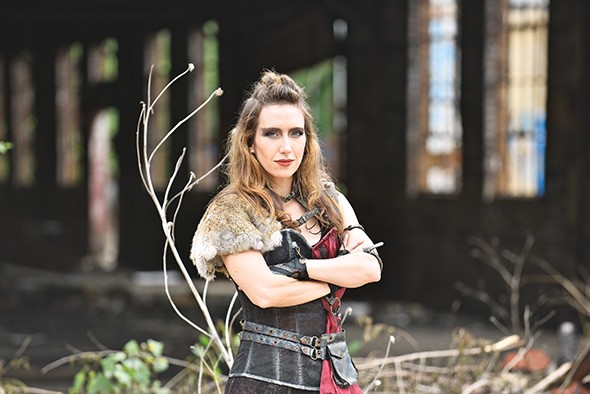 Premiering in Paris in 1875, Georges Bizet’s Carmen is one of the most famous and influential operas in history, featuring a huge cast and large-scale production numbers in its more than three-hour runtime. Peter Brook’s La Tragédie de Carmen — to be staged by Painted Sky Opera May 17 and 19 at Freede Little Theatre in Civic Center Music Hall, 201 N Walker Ave. — is decidedly not that. Premiering in 1981, Brook’s minimalist, 90-minute reimagining retains some of the most famous music from Bizet’s opera but eliminates all but six characters. A 1983 New York Times review called it “a bird that makes noises like an opera but looks like a play.”

Painted Sky artistic director Rob Glaubitz said Brook’s version, which eliminates the choruses of factory workers, children and soldiers to focus on the complicated, tragic relationships between the four principal characters, is an “intimate form of opera” that is “really direct and forceful.”

“It is an interesting, dramatic work, and it is a little different than a lot of shows,” Glaubitz said. “It has that kind of immediacy that I think a lot of plays do and some operas do not because a lot of the 19th-century operatic whimsy a lot of the composers added to their works is really stripped away.”

"Every character in this show is kind of hanging on to their place in society with their fingernails, like everything is just a step from falling apart."
—Rob Glaubitz tweet this

Bizet’s work continues to enthrall audiences even in the rapid-paced 21st century, but Glaubitz said Brook’s version might be more appealing to viewers accustomed to the shorter running times of films and TV shows.

“I’ve never felt bored in a production of Carmen,” Glaubitz said. “I think one of the reasons why it’s a top-five-in-the-world opera is because it captures your attention. It’s well constructed dramatically. So I don’t think the three-hour run time is a big deal in Carmen. Having said that, I think that some of today’s audiences, with the way we consume entertainment right now, will be more drawn to this version of Carmen because it has that directness and that immediateness. … I really do think that almost anyone could come to the original version of Carmen and just be entranced. If you see a good production of it, you would enjoy it, but I think this will have a wider appeal to those who prefer shorter entertainment.”

“Every character in this show is kind of hanging on to their place in society with their fingernails, like everything is just a step from falling apart … and every character interacts with each other in a more instinctual and base way rather than with always a lot of forethought and consideration,” Glaubitz said. “Society is kind of constructed out of whatever they find from where society was before, so a lot of costumes kind of look like they’re almost found items … like patchwork skirts for Micaëla, and our Escamillo, who in the show is a fancy bullfighter, he’s going to be more like a Thunderdome gladiator type.”

While Glaubitz does not have to worry about wrangling a large cast, the smaller-scale production presents different challenges to him as the opera’s stage director.

“Bigger opera is a lot of times about creating incredible stage pictures, and sometimes the stereotype is that the actual dramatic interaction is lost between the characters because of the attention that’s placed on other things,” Glaubitz said. “So when you’re doing a show like this with four or five or six people, it is more like directing a play, and that’s a really attractive thing to me as a director. I want to be able to work with actors on dramatic intention and creating these relationships between characters that sometimes you don’t get a chance to do as much in the bigger operas because of the nature of the beast.”

For his reimagining of the story, Brook returned to Carmen’s source material, an 1845 novella by French author Prosper Mérimée, and in some ways, Glaubitz said, La Tragédie de Carmen is a more faithful representation of Mérimée’s original intent.

“The original novella was called Carmen, but it was really about Don José,” Glaubitz said. “What this does is it shoves that focus onto Don José while letting Carmen be almost, strangely enough, a supporting character in the opera that’s named after her. So we were really tracking the way that he falls apart from the beginning to the end of the show, his descent that has been brought on by his interaction with Carmen.”

“I don’t think he goes offstage for almost the entire show, so that’s 90 minutes of being onstage, which is a long time to really maintain that concentration in an opera, especially with that kind of intensity,” Glaubitz said. “Opera has, and it’s probably justified, the stereotype that the actors don’t always act; they get up there and they have wonderful voices. And for this show, you can’t do that. It doesn’t work. You have to have singers who can really portray characters. … Little things become very important on a smaller stage. Gestures, exact placement — some things that aren’t as important on a bigger stage become very important.”