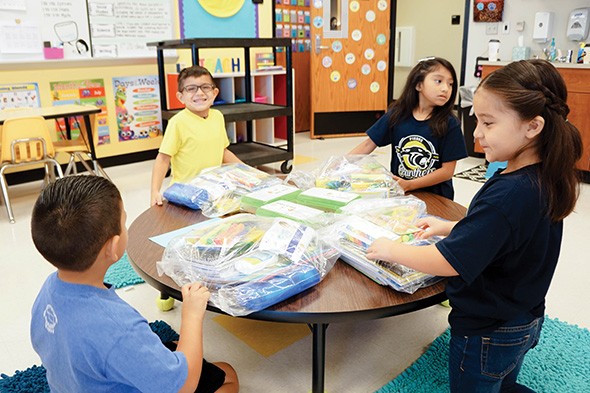 Mary Golda Ross Elementary School bilingual assistant Elizabeth Claudio, 26, had never met the president of The Foundation for Oklahoma City Public Schools when she received an email from her a few years ago. But the email, she said, led her to believe that the woman must be an angel.

It basically asked Oklahoma City Public Schools employees who were not teachers if they wanted to go to college to earn a teaching degree — all expenses paid.

“I jumped on it,” Claudio said. “I could not believe that someone would want to do that for me. Mary is wonderful.”

The foundation’s president and CEO, Mary Mélon, and its board members developed the program they titled Bilingual Teacher Pipeline Project in an effort to recruit and maintain qualified bilingual teachers in a diverse district with high turnover and retention issues.

“We have realtors who tell families to move so that their kids don’t have to go to Oklahoma City Public Schools,” Mélon said. “These kids are amazing, and there’s 45,000 of them … that’s too many kids to leave behind.”

With 60 percent of Oklahoma City Public Schools students being Hispanic, Mélon said the need for bilingual teachers is immense.

“I can’t imagine trying to learn science and math in a language I could barely understand,” Mélon said. “I would be terrified.”

The preschoolers who enter Ross Elementary for the first time are terrified, Claudio said.

“Most preschoolers who start school here only speak Spanish,” Claudio said. “They’re nervous, and so are their parents, but when I welcome them in Spanish, everything changes. Their faces light up, and the parents are so appreciative. They are so relieved that the person here who will teach them how to read and write in English also speaks Spanish.”

Having a teacher who is bilingual, Mélon said, removes the need for the district to hire both a teacher and a bilingual assistant and makes learning English easier for students. Mélon said offering bilingual school employees the chance to earn a teaching degree debt free makes them loyal employees.

The Foundation for Oklahoma City Public Schools is not only interested in maintaining qualified teachers. The foundation’s main purpose is to build strong community support for the schools. 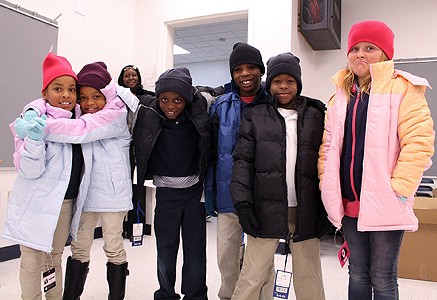 Some harsh realities of Oklahoma City public schools include the fact that 90 percent of students live in poverty and nearly 1,900 are homeless.

“Wealthy school districts get a lot of support from their communities, and that is wonderful,” Claudio said. “But poor districts should also get support. They are the ones that need it most.”

The foundation works to recruit community businesses that are willing to donate to schools within the district. Current and past donors include Cox Communications, Bank of America, OG&E, Sonic Corp., Love’s Travel Stops & Country Stores, Devon Energy, Verizon, Paycom and Blue Cross Blue Shield of Oklahoma.

Cox Communications senior vice president and regional manager Percy Kirk said he was looking for a way to get to know Oklahoma City when he stumbled on the foundation.

Kirk, along with his wife and two sons, moved to Oklahoma City in 2010 with the notion that the city would be their forever home. Getting to know the community was a top priority, and volunteering was a sure-fire way to get caught up fast.

“I went to my predecessor and asked him what our company does for the community,” Kirk said. “We had this big warehouse we called the ‘teachers warehouse.’ Everyone was enthusiastic about helping out. We’d fill the warehouse with crayons, pencils and calculators. One day, we asked ourselves, ‘What if we are wrong in what we assume our schools need?’”

In an effort to determine what students and teachers within the district actually need, Kirk became heavily involved with the foundation and ultimately became vice chairman.

Kirk, Mélon and fellow board members incorporated DonorsChoose.org into the foundation. DonorsChoose.org is an online platform on which verified public school teachers post their specific school needs along with the amount they are hoping to raise. When businesses are looking to donate to a school, Mélon directs them to DonorsChoose.org and guides them through the donation process.

Needs that cannot be filled online are filled in person. One fundraiser in particular is close to Mélon’s heart.

Coat-A-Kid is an initiative the foundation operates each year to ensure that Oklahoma City Public Schools students in need receive new winter coats.

It’s where Mélon’s motherly instincts kick in most. When Mélon was asked if the district would accept used coats for its students, she refused.

“The look these kids have on their faces when they get a brand-new coat with a tag still on it is priceless,” she said. “My kids got brand-new coats each year when they were growing up. Why shouldn’t these kids?”

Donations for the Coat-A-Kid project can be made on the foundation’s website.

Coat-A-Kid, DonorsChoose.org and the Bilingual Teacher Pipeline Project are only a few initiatives the foundation takes in its effort to make lasting change in the district.

Claudio’s life is an example of how a supportive community can change the life of an Oklahoma City Public Schools student.

Several years ago, when Claudio thought she wanted to pursue a career in the medical field, she stopped by the school she now works at to say hello to her former teachers, one of whom told her the school was looking to hire a bilingual assistant and that Claudio should apply. When she saw the opportunity to make a difference in the lives of children at the school, Claudio put pursuing a college degree on hold and began helping students in her old classroom instead.

Her dreams began to change with each child she met.

“Pursuing a medical degree seemed like a good idea,” she said. “But it wasn’t where my heart was. There’s no way I could leave these kids.”

Years later, the district and community now provide Claudio the chance to earn a degree in the field she is most passionate about.

She teaches Spanish and English to her 10-month-old son Leo while her husband and father work together in the construction business. Her mother watches Leo while the aspiring teacher attends education courses at University of Central Oklahoma or works at Ross Elementary.

“Without their help, there’s no way I could do this,” Claudio said. “Without everybody’s help, really.”