Maybe you can’t get everything from Amazon — like connections and understanding.

“Most bookstores — cool bookstores at least — are much more than just a place to go and buy a book,” said Camille Landry, who recently re-opened Nappy Roots Books with her husband, Banbose Shango. “It’s a place to hang out. It’s a place to talk. And it’s definitely something that the African-American community in Oklahoma City lacks, just a place where people can go and think big thoughts and have big conversations about big issues, or small issues for that matter, in a space that’s safe and empowering.”

Advertised as “Oklahoma’s only black bookstore,” Nappy Roots originally opened in the New Black Wall Street Marketplace in 2017 but closed after a few months. Realizing the ongoing need for such a business, Landry and Shango decided to re-open the store in a new location at 3705 Springlake Drive earlier this month.

“Bookstores do not make a lot of money. It’s not something that’s going to let me retire to a Caribbean island,” Landry said. “One of the primary goals in opening this bookstore wasn’t just to sell books and promote literacy, it’s also to be a place where communities who maybe don’t have as much of a voice as they need to can do their thing in a safe space.”

She soon realized that the black community wasn’t the only minority population in Oklahoma in need of a safe space for sharing their experiences.

“The LGBTQ community is marginalized, and the whole genre of literature is developing,” Landry said. “There’s some really awesome works by authors, and I realized that I knew a lot of people in Oklahoma that were writing. It’s a community’s voice that needs to be heard.”

Pride-Ful Books, a reading and panel discussion featuring local LGBTQ+ authors, will take place 6-8 p.m. Saturday at Nappy Roots.  Asa Leveaux, one of the authors scheduled to appear, said spaces like Nappy Roots are vital to people trying to find a connection to the world around them.

“I believe that bookstores are important because nerds like me still exist,” Leveaux said. “We get a bit of total, unnatural excitement from the smell of pages, and it is real, and there is not an iPad or Kindle that will erase that or replace that. ... There’s nothing that makes you feel more like you’re not alone in the world than to read the words of someone else that maybe looks like you, feels like you or loves like you.”

Helping marginalized people realize their importance was Leveaux’s main objective for writing I Am Man Enough: 365 Affirmations for Men and collecting essays from female writers for its companion book, I Am Woman Enough.

"Most bookstores — cool bookstores at least — are much more than just a place to go and buy a book." — Camille Landry tweet this

“My entire reason for doing most of the work I do is so that people really do know that they are enough, because a lot of times we’re doing things because we don’t feel like we’re enough because someone before told you that you were not pretty enough, not beautiful enough, not handsome enough, not skinny enough,” Leveaux said. “There are so many things that someone once told us about ourselves that we then believed, and now we have this preoccupation with self and we do a lot of things so that we can be seen in different lights. Even as a veteran, I’ve seen people get into the military just because their dads felt like they weren’t man enough. So to prove their dad wrong, here they are at basic training.”

Leveaux, who also founded the online educational resource Queer School, said growing up as a bisexual African-American made him appreciate reading the works of people with struggles similar to his own.

“If you’re a little boy in Oklahoma, don’t be a little black boy,” Leveaux said. “And you’re gay, or having effeminate traits? Yeah, you’re probably pumped full of ideas that you don’t matter. Your identity is being dismissed, and so you’re looked over. No one actually sees you. It’s like they just stomach you, but they don’t celebrate you. They just deal with you and allow you to be, but you need to remember your place, and you need to remember that you need to be quiet. So the fact that LGBTQ people are writing is totally counter to that because you are showcasing the voices of LGBTQ people.”

Another author scheduled to appear is Sharon Bishop-Baldwin, who, along with her wife, Mary, wrote Becoming Brave: Winning Marriage Equality in Oklahoma and Finding Our Voice about their successful decade-long legal battle for the right to get married. Bishop-Baldwin said that holding an LGBTQ+ event in an African-American bookstore will hopefully give the two disenfranchised groups, which in many cases overlap, a chance to better communicate. 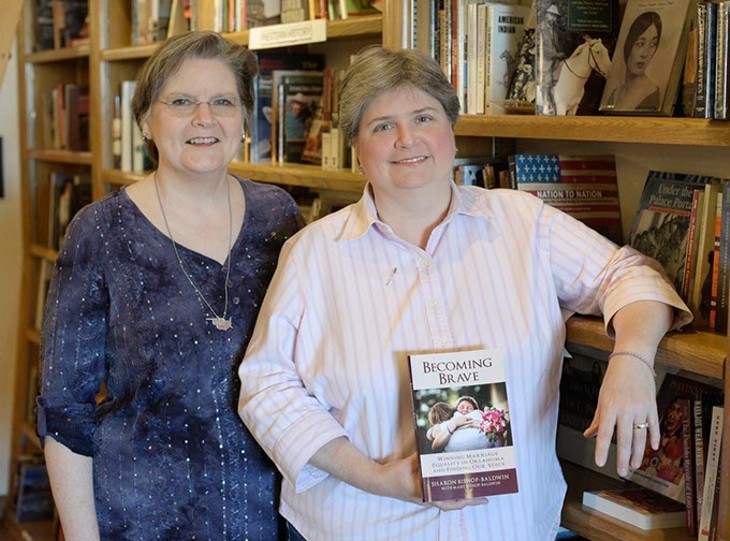 “In 2018, I think anything we’re doing as marginalized communities to improve intersectionality, to understand each other, not only our historic plight but our current frustrations and challenges, I think that’s a good thing,” Bishop-Baldwin said, “because if you took all of the marginalized communities and you put us together as allies for one another, there’s more of quote ‘us’ than there are of quote ‘them.’ When your own government is targeting, like in our case, where you see that the legislature is repeatedly targeting the LGBTQ community, and certainly the federal government is doing some of that, and I know people of color, especially like right now, you’re seeing they’re facing huge challenges. They’re being targeted by the government, so I think if we all realized, ‘I’m not a Muslim, but I certainly can understand the Muslim’s plight, and I certainly understand the immigrant’s plight. … Despite what I’m not, I can be an ally.’ I think a bookstore, where people naturally seem to gravitate for information and enlightenment, I think that’s a perfect place to say, ‘You know, this is primarily a book store for black people, but LGBTQ transcends race. There are people who are in the African-American community who are also gay. … I think it’s really good if we’re increasing opportunities for people to find fulfillment regarding both of their identities or all of their multiple identities in the same places.”

“It’s an opportunity to bring kids in, turn them on to books and let them have fun,” Landry said. “It’s also really, really important for children of color to have access to literature where they see themselves reflected in it.”

When school starts in the fall, Nappy Roots, affiliated with the nonprofit Youth Uplift, will begin offering homework help after school and reading clinics on the weekends. Landry has also begun collecting literature by Native authors in Oklahoma and plans on hosting spoken-word poetry slams and events for children’s authors.

The store is currently seeking donations of new and gently used books to send to children held in U.S. government detention facilities.

“There are a lot of underserved communities when it comes to literature,” Landry said. “I don’t think I can do it all, but I can whittle away at pieces of it that are accessible to me.”