Over 90 percent of Oklahoma City students meet the qualifications to receive free or reduced lunch, and 61 percent of all Oklahoma students come from homes in poverty. (Mark Hancock)

For a majority of Oklahoma children, paying attention in class competes with thoughts about their next meal, faded clothes or whether their parent will be home waiting for them.

That’s because the majority of Oklahoma children in public school live in poverty. In fact, the state’s 61 percent student poverty rate — based on students who qualify for free or reduced lunch — is the fourth highest percentage in the nation.

“You think a kid who is hungry is really thinking about [increasing] that GPA so they can make it to college?” said Kent Smith, president of Langston University. “It doesn’t work that way.”

One of the biggest challenges to education in Oklahoma is the fact that most kids come from poor homes, and that’s not a problem easily addressed within the education establishment.

While Oklahoma has one of the highest student poverty rates, the national average is now at a point where more American students live in poverty than those who don’t, according to the Southern Education Foundation (SEF).

“Without improving the educational support that the nation provides its low-income students — students with the largest needs and usually with the least support — the trends of the last decade will be prologue for a nation not at risk, but a nation in decline,” said SEF Vice President Steve Suitts in a statement about the new report showing 51 percent of American students live in poverty.

Poverty is a challenge for schools primarily because it means a great teacher and a great school might not be enough to help a student who comes from a not-so-great neighborhood or home environment. 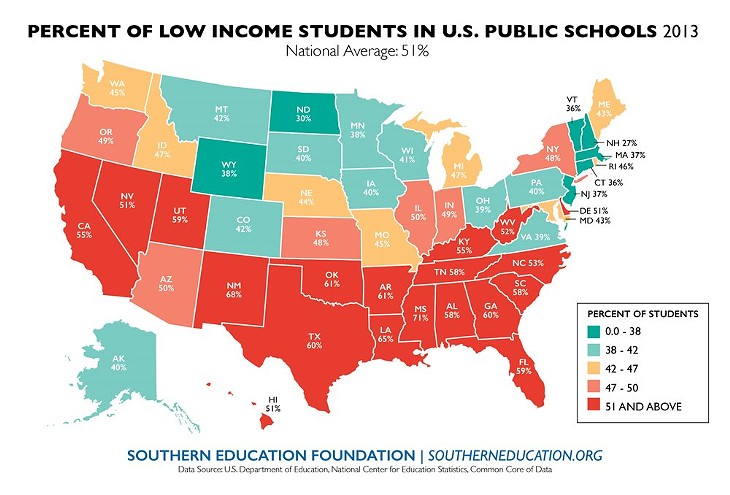 In Oklahoma City Public Schools, 90 percent of students are eligible for free or reduced lunch. While the district offers some programs like free meals at most schools for all students, the high poverty rate demonstrates the need for solutions that go beyond the classroom.

At Edgemere Elementary in north OKC, a new community school concept was launched last year in an effort to offer students not just a good education but access to healthcare, counseling and other things that can improve their well-being. The school also plans to try job training for parents and family meals for households that might not otherwise get one.

“High-poverty schools bring special challenges that require more innovative ways of educating and caring for our students,” Rebecca Hollis, a Southern Education Leadership Initiative Fellow with Oklahoma Policy Institute, wrote in a column advocating for community schools. “Community schools are a way to meet those challenges without reducing expectations for low-income students.”

In many ways, the school system needs the help of the city in an effort to provide holistic support for students and their families. But the city also needs the schools in an effort to attract more families and keep those who have moved to developing urban communities in recent years. “Holistic means we need to work together with the schools,” said Shannon Entz, the lead planner with the city’s Strong Neighborhoods Initiative (SNI). If students are living in households that don’t have electricity or don’t have water, that means they are coming to school possibly hungry, tired, unclean and it is really hard for them to focus on school. The schools have to deal with that, and the city can help.”

SNI is directing $4 million annually into three specific urban neighborhoods, funding sidewalks, street lighting, home renovation assistance and other projects that can boost the quality of life for a neighborhood and its residents.

Another issue Entz’s team is also trying to address is the high percentage of renters in those neighborhoods, which results in high turnover for local schools. SNI has also invested in an after-school program.

“Do we do it enough?” Entz asks herself. “No. We need to do better. There is no doubt about it. But this feels like a good start.”

Oklahoma’s high student poverty rate can be easy to overlook with other economic data that paints a rosier picture of the state’s economy.  A sub 5 percent unemployment rate — ranked 14th in the nation — a payroll growth rate more than double the national average and a booming energy industry have provided the state with the kind of statistics chambers dream of. But they don’t tell the whole story, and the statistics of students across the state and in Oklahoma City show a generation that is growing up in poverty.

“Most people will talk about how great our low unemployment rate is in Oklahoma but what most people don’t talk about is how many people are underemployed,” said Smith, who discussed education in Oklahoma as the keynote speaker at Dialogue Institute of Oklahoma’s luncheon this week. “Unfortunately, we are one of the worst performing states educationally in the United States of America.”

Low educational outcomes and poverty appear to be linked, which means a key to improving student performance goes beyond the walls of a classroom and into the community, Smith said.

“This is something that should involve all of us,” he said. “I don’t believe we understand how dire the straights really are, and I certainly don’t think we do a good job of helping [citizens] understand the data.”